After their interview with the helpful priestess, the party set out almost immediately. They ride from Casterby to Castle Amnis to cross the river, then north along the river. The day is damp and cold, and a sudden downpour makes the afternoon travel rather miserable.

The daylight is already starting to fade as they finally set eyes on Castle Hræfnmor, an ancient and ruinous pile that seems to glower over the barren moor. A light burns in the highest of its seven towers; were it not for this the castle would seem abandoned.

A patrol of six heavy horsemen ride out of the main gate to intercept the party. The soldiers are dour, wrapped in heavy cloaks against the cold, and seem all to be past the prime of life. Still, they have the look of those who have seen long campaigns and many battles.

The lead soldier calls out. His words are indistinct, muffled by the fierce wind whipping round them. But they seem neither greeting nor challenge. Lycinia rides as close as she dares, and shouts, "I am princess Lycinia of Feyalldra. My companions and I are travelling northward. We request hospitality of your liege and shelter from the storm!" 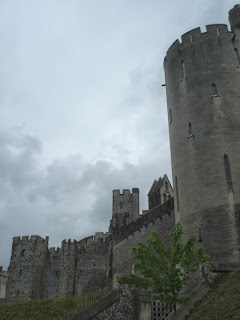 The soldier wheels his horse about and motions for them to follow. They ride swiftly  towards the brooding fortress. Age and the elements have not been kind to the castle, but its stout walls still seem the equal of any besieging army, should one ever venture this far into such a desolate place. Once inside the courtyard, the portcullis is lowered. A cloaked figure runs out to meet the returning horseman, flanked by two pages bearing lantern. The figure takes one of the lanterns to lead the guests inside as the pages attend to the horses.

They are led into a great, dark, and dusty hall. It's hardly warmer than the outside; servants are hastily building a fire. A single candelabra provides meagre light.

The cloaked figure throws back his hood. He is a tall, broad-shouldered man with a military bearing. His head is recently shaven; striped lines run down the back of his head, scars left by the claws of some beast. Half his face is a mass of scar tissue, and he is blind in one eye. "I am Jönnick," he says, "formerly Captain Jönnick in his Majesty's army serving under Sir Gaunet, now major-domo of his castle. You must forgive us our lack of preparedness, unaccustomed as we are to visitors. I must also  issue apologies from Sir Gaunet himself, as he will be unable to receive you till the morrow. Tonight he must keep a vigil in the chapel. But come, sit, I shall have some fare and strong wine brought round to restore you after your long journey. It will give the servants time to make up some quarters for you."

Jönnick is more soldier than servant or courtier, but he does his best to fulfil the rôles of both. He takes dinner with the guests, eating just enough to be polite, making as much conversation as he is able without it seeming like an interrogation. Castle Hræfnmor's hospitality is spartan, but it is at least genuine. At length the guests are shown to their rooms, with yet more apologies. The guest's chambers are in such an unsatisfactory state that the only decent lodging is some old soldiers' billets. Théscine assures the major-domo that it's far from the worst accommodations they have seen since leaving fair Feyalldra.

After a cold night of howling winds and pattering rain, the party is given word that Sir Gaunet himself will be joining them at breakfast. The hall has been cleaned and dusted, and a roaring fire already blazes in the hearth; Jönnick has apparently had the servants working through the night.

Sir Gaunet is sitting at the head of the long table, dressed in threadbare finery and tarnished jewellery. He rises as his guests enter, giving them a sweeping bow. The ageing knight stands nearly seven feet tall, and yet moves with strength and grace despite his terribly emaciated frame. His face is sharp and aquiline, with vivid green eyes staring out from dark-ringed sockets. His hair is thin and scraggly, though he wears it long to the middle of his back. His once-warm smile seems forced now, an animalistic grimace of sharp and crooked teeth. "My honoured guests," he croaks, as if long unaccustomed to speech, "please join me on this fine morning."

During the meal, Sir Gaunet attempts to play the host, but it is obvious he is so unused to company that it pains him to be around people for too long. He cuts an alternately terrifying and pathetic figure, laughing at the wrong moments, losing the thread of conversation, lapsing into distant silence. The servants move around him wordlessly, as if entrenched in an ages-old routine.

When the last of the dishes are cleared away, Sir Gaunet leans forward with his bony, long-fingered hands spread out before him on the crimson tablecloth. "There is something I must ask you," he states sternly, "something important to which I dare not attend personally."

"What is it?" asks Lycinia, trying to hide her trepidation.

"My court wizard," replies the old knight, unsure of how to begin. "It may surprise you, seeing the state to which my curt has been reduced, but I do still have a court wizard. Vethrelcem the Thaumaturge, Vethrelcem the Wise, Vethrelcem, Magister of the White Circle, a powerful wizard, and more than that, my oldest friend. We grew up in this grim manse together, his mother handing him the library even as mine granted me the Land. I've not seen nor heard from him in more than a fortnight. He sealed himself up in his library with some mouldering tome or other to do his arcane research. None here dares to go look in on him; it's unwise to meddle in the affairs of wizards. But wizards all be ye, my fine guests!"

The proposition is accepted with little prevarication. The party is as anxious to solve the mystery as they are fearful of what they may find.

Vethrelcem's chambers occupy the furthest end of the castle. The party proceed cautiously, almost as if they were back in the dungeons of the ruined monastery. Lycinia takes the lead with a torch, the rest follow with weapons drawn. As they climb the narrow spiral stair up into the draughty tower, they jump at the sounds of thunder outside. The stormy day does nothing to assuage their feelings of dread at entering a wizard's laboratory unannounced.

The heavy door at the top of the staircase falls slowly open as Lycinia tests it. The room beyond is cold and dim, but dry. The daylight seeping in through the sparse windows can barely illuminate the scene. 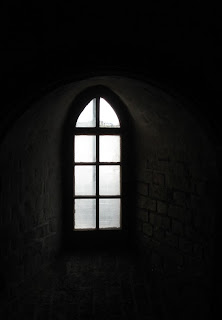 This is evidently the library. Books and scrolls not only line the walls, but are piled atop tables, chairs, and any other available flat surface. A large writing desk sits in the centre, piled high with books, papers, papyri, quills, ink &c &c. The wizard sits behind the desk in an overstuffed armchair, absorbed in a large tome, one finger marking his place in the text. He does not stir as Lycinia leads her companions through the door, nor speak a word as they hastily sheathe their weapons.

Lycinia puts the torch in a sconce by the door and steps towards the desk. "Sir Gaunet sent us," she says meekly. The dancing flames of the torch are reflected in the wizards spectacles, but he does not acknowledge his guests.

"You shouldn't read in the dark like this," ventures Miolla, a bit louder, "you'll hurt your eyes." And yet the wizard does not react.

As they approach, they notice the candles on the desk are all burnt down to stubs, and the coals in the little stove next to the desk are cold. And the wizard himself is dead, from age or the cold it's hard to say, but there are no signs of anything other than a natural end.

"Who's going to tell the old knight?" asks Théscine.

They tramp back to the main keep, deliberating the whole way. In the end, Miolla agrees that she can deliver the news in the least painful fashion. Even so, Sir Gaunet's reaction is hardly what they'd expected. "The old fool!" he says, "I always told him to mind that stove of his! I thought he'd end up burning the place down, not freezing to death. Well, at least there's not demons running rampant through his chambers...."

Jönnick takes charge of the burial, and has a gang of soldiers remove the body down into the castle vaults. He apologises for his liege's strange manner, and says that whilst they should feel in no compunction to leave until the storm has passed, they may wish to stay out of the way whilst sir Gaunet gives vent to his grief, as he must eventually do. He further implores them to have a good look round the wizard's chambers to make sure nothing of a dangerous magical nature has been left behind.

In truth, there's very little of actual value left in the wizard's collection. His library is full of interesting and varied treatises, but almost none of them touch on magical subjects. There is a dearth of potions and wands, and anything but the most mundane tools of the Art. His laboratory is adequate, but seems to have been neglected for many a year. 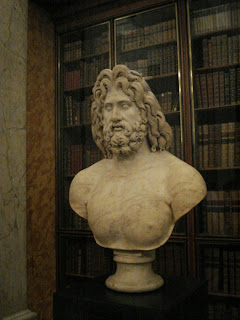 So the PCs have 4 days to conduct magical research in the library, essentially for free since they are using up the dead wizard's supplies. And in any case, they spent 500sp on a book with no game effects, so it all evens out eventually. plus, they'll be more interesting to play if everyone has different spells. But they can't all use the same book at once, so--

Miolla tries to transcribe Knock from the M-U's spellbook, but fails (INT penalty).

Aldira has decided to transcribe all her spells in to Una's spellbook and make that into her main book so as to always have a memento of her friend lost in the monastery ruins. She has time to transcribe Sleep, Feather Fall, Faerie Fire, and Unseen Servant.

Lycinia also has time to use the lab to cast Identify on her unlabelled potion: Gaseous Form.

I had used the d30 Sandbox Companion's Adventure Generator Tables to flesh out the Investigate/Death result generated by Mythic. The results were:

Then I asked Mythic a final question which suggested everything as it played out above:
Q: Has something really horrible happened? Likely: 96, Exceptional No.

This couldn't be put into the narrative without spoiling things, but I definitely didn't want to omit it from the post altogether.
Posted by Alea iactanda est at 21:26