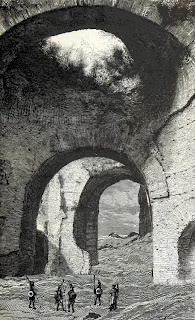 Five weary figures stand at the bottom of a stony mountain path, surveying the narrow valley before them in the twilight gloom.

"It was easier to climb down here than I thought," says Nikias, the young soldier.

"Look at that gate up ahead,"  It looks like it's standing wide open." responds Eratosthenes, the veteran officer.

"I would expect it's open night and day." says the courtesan, Nossis.

"Good," adds the fearsome, if superstitious, Typhon, "because it would be hard work getting back up!"

"I'd say few have ever done it," says the wily Dicaearchos, "without the favour of Zeus..."

[Whilst the T&T Katabasis characters are finishing their frankly anachronistic conversation*, let's do a bit of housekeeping.

Fate is rerolled every session, so:
Dichaearchos has the best luck, thanks in no small part to the Orphic amulet he carries. He also rolls a 17 on 3d6; his base score (5) with the bonus for the amulet (+6) give him a score of 28 for this session. Nikias, despite his -1 base value, manages to roll a DARO on his check, so he will have a Fate of 25. Eratosthenes rolls another 10, so he holds steady at 15 Fate (+3 normal, +2 amulet). Typhon's Fate drops to 14, and Nossis' sinks to a mere 11.

Everyone is suffering from the wounds they received in the dungeon, and the long, tiring journey through the dark caverns gave everyone a point of Fatigue; this will reduce everyone's effective STR by 1. Nossis already had 5 fatigue points from spellcasting, so she's now at 6, for a -6 STR and -3 to all other attributes (save for CON). Now, back to the adventure.] 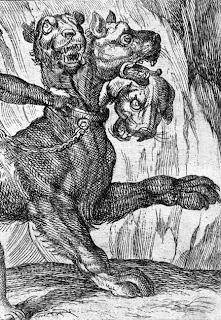 The party all crouch down behind some rocks and look down the path at the gate, still some distance away. The cyclopean gate is carved of black stone, and looks the equal of any besieging host. The magnificent doors on their great hinges of adamantine yawn open, but some sort of creature can be seen pacing the ground before the opening, occasionally emitting gouts of flame.

Adeimantos (dauntless) Nikias volunteers to scout ahead. Approaching unseen will require a level 3 SR on DEX. A roll of 8+23=31, success. Nikias slinks off, darting from boulder to boulder for cover. He comes back a few minutes later, looking a bit pale and trembling. He reports that, indeed, guarding the gate he saw, "unspeakable, unmanageable Kerberos, the savage, the bronze-barking dog of Haides, fifty-headed, and powerful, and without pity.**"

"I thought he only had three heads," says Dicaearchos.

"You try painting a 50-headed dog on the side of a vase," replies Nikias.

"Wait a minute!" cries Nossis, "Of course! How foolish of me not to have thought of it sooner: we just go right in."

"How do you figure?" asks Eratosthenes.

Nossis recites: "A fearful hound guards the house in front, pitiless, and he has a cruel trick. On those who go in he fawns with his tail and both his ears, but suffers them not to go out back again, but keeps watch and devours whomever he catches going out of the gates of strong Hades and awful Persephone.***"

Everyone looks at her with more than a little disbelief. Perhaps they do not trust the accuracy of her memory in such an exhausted state. Or perhaps they mistrust the words of an ancient farmer, who seems to have forgotten the other 98 ears one would expect from earlier in his poem. But what choice do they have? At length, Eratosthenes decides to take action.

"Company, form up!" he shouts, and the soldiers instinctively snap to attention. "We're going to rely on Nossis' ear for poetry, and march straight through that gate! All right men... march!"

It will be a level 1 SR on Charisma to command the troops. Eratosthenes rolls 7+15=22, success. With Nossis following behind, Eratosthenes leads the soldiers bravely through the gate. The terrifying Kerberos is all sweetness to them as they pass, but Dicaearchos makes the mistake of looking back once they've passed through the gate, and fifty pairs of flaming red eyes stare back at him hungrily.

The forbidding plain stretches before them, hemmed in by impassible mountains and a forest of gnarled, twisted trees. The little band stop to consider their options. It is then that Dicaearchos suggests they refer to the text on the amulet he wears. He carefully removes the thin sheet of gold rolled up in the golden phylactery. But the glint of gold arrests the attention of other netherworld denizens.

A little German goes a long way if you want to use Katabasis monsters in your own T&T games, so here is the stat block explained item by item.

Grabräuber: Graverobbers, an NPC party like the characters.
MR: MR is MR, (1d6x5)+5. W=Würfel, die.
RS: stands for Rüstungsschutz -- Armour Points; a grave robber has 1d6x5 -15 (so, 0-15)
#: number encountered is 2d6-5, minimum (mindestens) of 1.
1W6-4 Schätze: 1d6-4 treasures; a Treasure is defined as being worth 3d6x10xDungeonLevel silver drachmae.
Spitemanöver: Spite manoeuvres, special effects inflicted along with spite damage (there's a table in the combat section)
INSG. 1W ➞BES. AUSR., 2W ➞NORM. AUSR.: (Insgesamt 1W Besondere Ausrüstung, 2W Normale Ausrüstung) That is, In total (insgesamt) 1d6 rolls on the Besondere Ausrüstung (special equipment) table, 2d6 rolls on the Normal Equipment table. You can click on the ➞ in the PDF to go to the relevant charts. 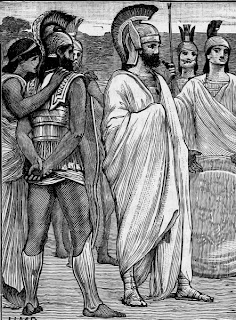 Totally not the PCs

So, for the encounter I rolled a group of 6 graverobbers. They have no treasures, just some miscellaneous (Normale & Besondere) equipment, to be determined later. For the sake of argument, lets say there's five men and a woman. The first one listed will be the leader. Thus, we roll their MR & RS, yielding:

As they have no treasure, I decided that they are ἄταφοι, the unburied dead, having been a group of adventurers killed fleeing in the Seleucid army's rout at the hands of the Ptolemaic forces, which battle

("sent forth many brave souls of heroes to Hades, and made them (i.e. their bodies) spoils for dogs and a feast for the vultures"). But, of course, this encounter is not with the souls of heroes. These graverobbers lack money to pay the ferryman, and are intent on rolling the PCs for spare change.]

Attracted by the glint of gold, a band of six mercenaries and hangers-on approach the party, spears at the ready, murder in their hollow eyes. The battle is joined.

[round 1]
In an attempt to end things without violence, Nossis casts φόβος (phobos: Oh, go away!) on the one who is obviously the leader. Her EDU(INT)+Fate+CHR is compared to his MR. Even though all three attributes are reduced by -3 for fatigue, 24+8+11 > MR35; the spectral soldier flees. Nossis acquires 4 more points of fatigue (5 for the spell, -1 for her staff).

Typhon, Nossis, and Eratosthenes (randomly) each get 3 damage from the trismegistos spite hits.

Nossis is going to fall over if she takes much more fatigue, so she joins in with her dagger. The PCs get 18 dice +67 now, and get a total of 133, with 5 spite.

Poor, tired Nossis takes the spite hit for her side, suffering the loss of 3 more CON. 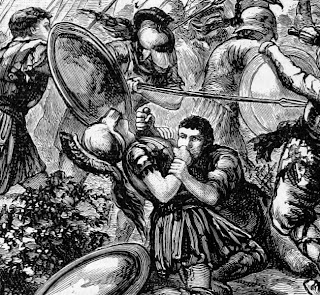 pictures in lieu of narrative combat

The vanquished shades lose all cohesion, and melt away into the rocky soil. Their leader is nowhere to be seen.

There are, however, a few items lying on the ground where they fell. To account for the Leader escaping with his own equipment, I will reduce the number of rolls for Special and Normal equipment by 2. Rolling the dice yields (1d6-2=) 4 pieces of special and (2d6-2=) 6 pieces of normal equipment. These are determined on the Besondere Ausrüstung table with a d66 roll, the Normale Ausrüstung with d666. So,

The PCs gather up their treasure, then turn their attention back to the inscription on Dicaearchos' amulet. To be continued...

* Astute readers will have recognised a clumsy paraphrase of Vergil's Aeneid, which the PCs could not possibly know, as it won't be written for another 250 years.