In the days following the apprehension of the villain, Lachaidiga has known almost no rest. An endless parade of city officials has been to see her, and, she has no doubt, all the other participants in the strange affair. At length they seem satisfied, and begin to go away.

And then it is that one day she finds herself at home, alone, and quite bored. She thinks to go out into the city in search of some diversion, but the late summer storms have arrived, and the wind stirs up the dust in the streets, making going abroad seem decidedly less pleasant. She cannot call on her dear Nillath, for she is sequestered in the Temple of the Sun, performing the rites that celebrate, at this time of the year, the victory of the Sun over the monsters in the outer darkness, who nearly caused the death of the Earth and all its peoples. She cannot even go to see her friend Udzar-sippuk, for he too is leading the ceremonies of thanksgiving to mighty Anzakàr, who succoured the people in their flight from the forces of destruction. She is on the point of wishing Enzzal were home; even an argument with her brother would be better than this mournful solitude.

And then it is that one morning the house nomenclator comes to announce an arrival: Leudagar, the barbarian 'leader' of the band of Ylhooni chaos-fighters.

"You will show my friend in," says Lachaidiga, "with not a hint of the disdain you just now evinced. And send one of the kitchen staff round with some wine. It better be the good stuff. Or I'll know."

Lachaidiga cursorily checks her coiffure in the reflection of an obliging brass urn, then hastens to greet her visitor. She finds the barbarian in the parlour adjoining the garden, sprawled in one of couches by the fish pond. He brightens when he sees her appear. "Oh, ho! If it isn't the heroine of the hour," says Leudagar, his voice booming louder than the peals of thunder overhead.

"Hardly that," says Lachaidiga as she unceremoniously flops into a pile of cushions on the ground, "Why, now that it's all over, the prefect is treating me as if I'm partly to blame. He's just covering up for the fact that I had to do his job for him. But it's been no end of headaches having to tell six dozen officials all the same story. And I still don't even know who the villain even is! No one will tell me."

Leudagar's expression darkens. "He was one of us once. Until he betrayed us. If we'd known he was in the City, we'd not have left him alive to do this. Tell me, I must ask: what will they do with him now?"

"He'll be sent to the mines, I suspect."

"They should slay that foul wretch!"

"Don't worry. No one survives down there for very long."

"And what of the wand? It is an artifact of evil--"

"And it's being dealt with. Don't worry, it's already been handed over to the Hermetic sorcery college to have the enchantment broken. We don't let nasty magic like that float around the place, no matter what people think. It's not very nice."

The barbarian is about to object, but then roars with laughter. "Well I'd scarcely thought that sorcerers would be our allies in the Great Battle, but I see now we have the same opinion on chaos. Not very nice indeed! Ha, ha!" 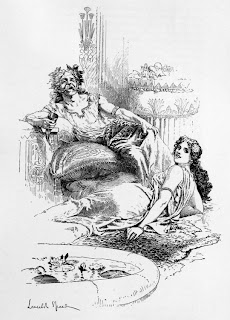 Lachaidiga and Leudagar make short work of the good wine. A servant is summoned to fetch them another jug, and then another, and another. They spend a pleasant afternoon laughing and drinking, and Leudagar coaxes out the details of her battles against the ghoul and the traitor. Outside the wind howls, and lightning now and again splits the sky, lending a strangely dramatic air to her increasingly silly account.

Her brother Enzzal arrives home in the afternoon, and finds the boisterous pair in the parlour. He quickly hides his distaste at seeing Lachaidiga's barbarian visitor, but it is a look his sister reads very well.

"Sister!" says he, "I see you have a guest. What a charming sight the two of you make."

"And an important guest at that," responds Lachaidiga. "So I hope you don't mind, but we've gone through all the good wine in the cellar."

"Mind? Of course not, sister dear. Nothing can darken this fine day. I've just come back from a most profitable meeting with your intended, and the preparations are well in hand. In fact, I would like to take this opportunity to personally extend an invitation to the good Leudagar, and all of his Ylhooni brethren, to join us next month at your wedding celebration."

Just then lightning flashes right over the garden and a peal of thunder booms, resounding through  the house. Lachaidiga jumps in fright. But was it the thunder that startled her so, or her brother's words; who can say? 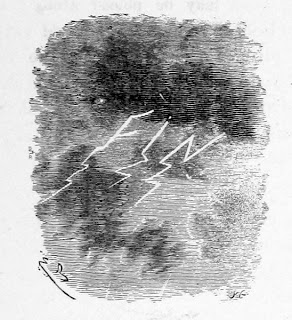