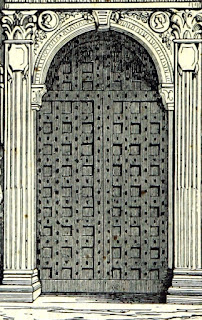 Reasoning that the guard dog came down the passage at the back, and since she's uninterested in stepping in anything, she decides to try left-hand passage instead. The passageway is rather wide, with roughly-hewn walls and a more even floor. It goes back for about a dozen metres, and ends in a stout door set into a frame of intricately carved rock. She can hear nothing moving beyond.

Not wanting to put down her torch nor her weapon, she does her best to grasp the overlaid woodwork without letting go of her sword. She tries carefully, and to her surprise the door swings freely open, revealing a dark chamber beyond.

[Room II - monster & treasure]
Despite the ornate doorway, the chamber beyond is just another natural cavern of unworked stone. There is some kind of pedestal in the middle, carved from a thick stalagmite, but beyond that the room is bare.

She approaches the pedestal cautiously, but nothing moves in the darkness. The only sound is her own footsteps, try as she might to tread softly.

[Q: Is the last of the cave's inhabitants here? Likely: 71, No.
A random monster, then, selected with the old-fashioned method of closing one's eyes and pointing to a random page in the monster section of the rule book: a fear spirit. POW 16.] 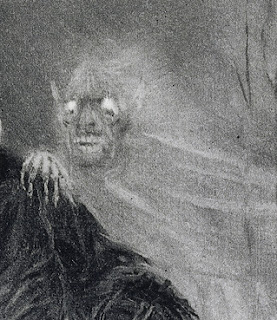 Then there is  sudden cold chill. Her hair stands on end, and shivers race down her spine. A horrible, translucent skull-face is peering at her, a diaphanous bony hand is grasping her shoulder. The phantom exudes waves of sheer terror, and seeks to dampen her courage, to force its way into her mind. It flits round her in a frenzy, shrieking and wailing in her mind, trying every avenue of assault. She stands firm against it, pitting her will against its own. It grows ever more frenetic, even as it exhausts its own might in the fruitless attempt to penetrate her wall of resolve. And then it is suddenly gone, dissipated back into the spirit realm.

[The spirit attacks by matching its Magic Points vs. the INT of its target on the resistance table. 16 vs. 18 gives it an initial 40% chance, doing 1d3MP damage, possessing the target if their MP hit 0. The PC hits back by matching MP vs. MP. Spirit combat all on its own can be a bit dull and mechanistic. The fear spirit failed the first attack, and which sent it into a death spiral; its chances got lower every round and the PCs only improved. It never rolled a single success, and was vanquished in 6 rounds: about one minute of game time.

Treasure: the treasure is (according to Appendix A) hidden under a loose stone. That sounds like a Difficult (half skill level) Search roll to notice. She rolls a 93...]

Seeing that this room with its terror spirit is just a guard post, and empty of aught else, she continues down the craggy passage on the other side.

[room III - monster & treasure]
The passage bends to the left and empties out into yet another natural chamber. A raised dais at one end has been carved into the stone floor, and the walls behind it smoothed somewhat, but the rest of the cavern has been left in its natural state. Upon the dais is a carved throne, upon which a blanched white human skeleton is seated. Beside the throne is a collection of unpainted pottery jars, and a large bronze shield and sword lean against its sides.

As she draws near, the skeleton rises from the ancient seat, takes up its brazen arms, and advances to attack, bony feet clacking across the stone ground. [Not a random choice. My LotFP game didn't have enough skeletons, so I'm starting this campaign out on better footing.] 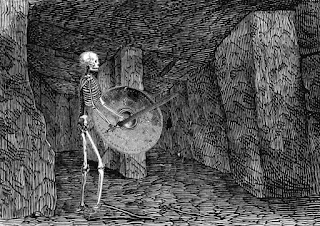 [round 1]
She darts to the side and swings at it the moment it steps within reach. It tries to interpose the heavy shield, but a moment too late. The blade's downswing takes off several ribs with a sharp snap [successful attack vs. failed parry; 3 damage (minimum roll) leaves it at 6hp]. Its riposte is nowhere near the mark; she barely feels the rush of air from the blade.

[rounds 2-4]
She trades blow after blow with the skeleton, but can no longer seem to get past the brazen shield. Every time her sword clatters against it, she must immediately retreat to fend off the blade in its other bony hand. A new strategy is needed for facing down this canny opponent -- for it is only she who will tire should the battle continue in this vein.

[round 5]
She feints low with sword, causing the skeleton to dip its shield just enough for her to swing the blade in a great overhand arc and crash it down on the gleaming skull. Bits of bone fly every which way as the skeleton fairly shatters with the mighty impact [normal hit vs. failed parry; 5 damage is a Major Wound, which destroys skeletons outright].

She catches her breath, and watches the bones lying upon the ground to make certain that no dark magics cause them to reassemble. Satisfied with her victory over the ancient warrior, she approaches its resting place.

Looking into the pottery jars, she sees the gleam of bronze and silver coins within, amongst which are to be found handfuls of semi-precious stones. She is about to pick a gem out of the hoard to examine it [difficult Sense 81/2=41% roll = 04, special success] she notices the oily sheen on the coins, and smells a faint whiff of the acrid compound [treasure protected by contact poison, probably of the alchemical variety since else it should have long ago evaporated].

Not wanting to touch the substance, she takes the skeletons sword and upends the pot, sending coins skittering over the dais. She applies her torch to them, and a sickly purple flame plays over them for a moment and then burns out. She scoops as many coins and gemstones as she can into one of her coin purses, intending to give them all a good wash later [total haul: 34BP, 7SP, 1GP, 16 pretty but worthless stones]. 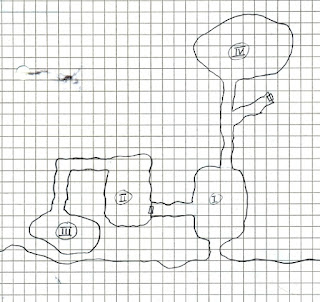 Her treasures secured in her pack, she heads back to the main cave. There is a moment of fear when she finds the door to the terror spirit's lair has fallen closed, but she is relieved to find that it opens as freely as it had before. She does notice the sigils of warding engraved into the inside of the door when she goes to open it, right underneath the warning not to disturb the tomb. She curses the idiot who hung the door back-to-front.

Overwhelmed with curiosity, she decides to quickly -- and quietly [Move Quietly (67%): 44, success] -- reconnoitre the other passage.

She has gone only a few metres down the passage when...

[Trick/Trap: I rolled Elevator room, which is wholly nonsensical here. So I decided to make it an alarm instead. Search roll (66%) succeeds.]

...she notices some fishing line stretched across the corridor at waist height, connected to a series of bells set on iron hooks in the wall. It is a simple matter to duck under it and continue on her way.

The passageway splits into a Y, so she takes the left hand side. After a few paces it empties out into another large cavern, which is evidently being used as a storeroom [Room IV - treasure only]. There are stacks of crates, some businesslike clay amphorae, some extra javelins, coils of rope, a heavy iron strongbox... a mixture of looted mercantile goods and provisions for an expedition. She doesn't fancy her chances with a locked box (she can't even think how to begin to pick a lock, so surmises that she at least isn't a thief!), and the rest of it would take too long to look through, so she decides to leave it in peace and try the other branch of the passage.

The right fork also only goes a few paces, and then ends in a solid wooden door. It is much less ornate than the other, and is an obviously new construction. She presses her ear to it, and tries to Listen [61% - her roll succeeds] to see if there be anything moving beyond.

She hears movement within: the click of claws against stone and the jingle of chain. "Probably more dogs," she thinks, "but maybe I oughtn't push my luck. I've been here at least an hour. Time to leave before the others come back."

She has, of course, been here scarcely twenty minutes, but the fear and excitement have distorted her estimate. She goes out through the main cave, pausing only to take the greatsword leaning against the cave wall. "This looks like the weapon that felled my armoured friend," she thinks. "I'd rather not meet it again in the future."

She sets out through the forest lugging the enormous blade over her shoulder. She still hasn't much context for her map, but the cave seems to be close to the water. [Nature (44%) roll succeeds] She is cheered to realise that the bird calls she keeps hearing overhead are made by seagulls. The water can't be far!

And indeed it isn't. After less than an hour the forest starts to thin out, and from atop a hill she can see through it to the blue water in the sheltered bay beyond. The bay is not very wide across at all. She runs down to the shore, drops her things on the beach, and plunges straight into the cold water. It's a shock to the system, but refreshing. Once the worst of the grime has been washed away, she clambers back onto the beach. "Mustn't tarry," she thinks. "They might track me with the dogs. at least if I keep to the surf, it should hide my scent from here." She shoulders her pack, and puts back on her sword belt. She strides for a ways down the beach, splashing in the surf. She pauses just once, to take the greatsword by the hilt and hurl it with all her might out into the waves. "Right," she thinks, "onwards to the temple." 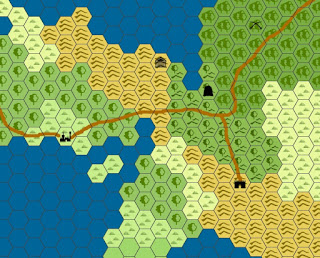