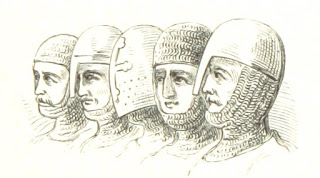 As is standard procedure, after a brief read-through of the rulebook, I rolled up about 10 characters. I assigned a Profession (character class) to each set of stats to form a stable of PCs, but decided that I would focus on just a handful to start, leaving the others a bit vague until either the GM emulator or simple inspiration suggested a use for them. As this is an adventure about knights & castles, the main starting PC would certainly be a Knight.

So, what does a Knight in Dragon Warriors look like? PCs have 5 characteristics, ranging from 3-18 as was common practice for games of this vintage. They are Strength (both physical strength and endurance), Reflexes (dexterity and agility), Intelligence (what it says), Psychic Talent (intuition and facility with magic), and Looks (charisma and appearance). I rolled 3d6 in order for each character, and assigned professions based on the results (and crossed out two hopeless characters). The set I chose for the Knight is:

He's strong, if occasionally clumsy, but he certainly has a commanding presence. He'll certainly do as the leader of his eventual party. 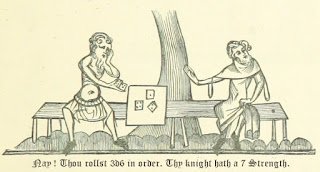 Following the rulebook, the next step is to roll for Health Points (hit points). This is 1d6 + a modifier based on profession, anywhere from +9 (barbarians) to +4 (sorcerer). Knights get 1d6+7; a crap roll of 2 gives my knight 9hp.

The next few steps of character creation are determining a set of scores for combat, sneaking, dodging, etc.

These all start at a fixed level determined by the character's Profession, but may be modified by attributes falling outside the human average (9-12). They mostly come in pairs: Attack & Defence, Stealth & Perception, Magical Attack & Magical Defence, and Evasion. To hit in combat, you need to roll your Attack minus your opponent's Defence or lower on 1d20. The others are the same, except they use 2d10. Evasion is subtracted from an object's Speed if the character needs to dodge. It's a very simple system at heart. To provide context, here are the base scores for a beginning Knight next to the numbers for a normal, non-adventuring human:

Due to his high Strength, my knight has a 14 attack, but is otherwise as above.

As a knight, he starts with three special abilities: Track, Armour Expert, and Ride Warhorse. Knights can wear any kind of armour without penalty, and along with Barbarians and some Warlocks (fighter-mages, like Elric) are the only ones capable of riding a warhorse.

Starting characters get equipment based on Profession as well. A knight is initially equipped with plate armour, shield, dagger, lantern, flint-and-tinder, backpack, 25 florins (silver coins), and a sword or morning star. Despite being only 1st Rank (rank=level, but also directly corresponds to one's professional standing), beginning characters stand above the common herd. 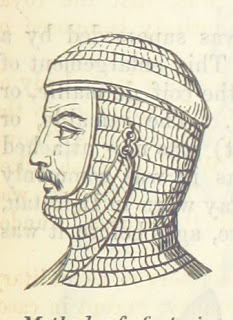 This is really all you need to make a character and get playing, but there's a whole section on generating your PC's background. The tables to be consulted vary by profession. Knights start by rolling d% to determine their social class (which is more likely than any other to be Noble [1-18] or Gentry [19-53]; sorcerers are the next highest with 1-13/14-22). My knight is born of noble blood, and will have all the duties and privileges commensurate therewith. He hails from Albion (England) in Ellesland (Britannia), so speaks Elleslandic as his native tongue. As a noble, there was a 40% to speak a second language in addition, but he failed the roll. Fully 15% of the nobility is literate; alas our knight had no time in his youth for bookish pursuits -- leave that to the sons of doctors, lawyers, and architects (who get a whopping 35%). Illiteracy means no chance of knowing ancient languages, so this concluded character creation by the book.

Oh, but he needs a name, doesn't he. Rather than making up vaguely-plausible sounding names, I have been grabbing everything (so far) from here: http://www.infernaldreams.com/names/Europe/Medieval/England.htm

My knight is thus yclep'd Loys (Louis), a nice name of Frankish origin.

I decided that I've been playing a lot of games with starting characters, so it might be nice to start this one out a little higher. Also, I really want to use the Jousting and Tournament rules, and a 1st rank knight cannot reasonably expect to make much of an impression in a tourney. So I bumped my knight up to 3rd rank. This provided increases to Attack, Defence, Magical Defence, and Health Points... of +1 per rank. DW is not a game of super-human heroics!

Since Loys is a noble, I wanted him to have more of a connection to the sandbox. Dragon magazine #96 has an excellent article, 'What good PCs are made of' by Katherine Kerr, on generating a (human) PC's history, using the actual middle ages as a guide. Skipping the parts that were already covered by the DW rules, it transpires that Loys is a legitimate child of his parents, but the youngest of three living brothers. Three other siblings died when he was still a child. His family is poor by the standards of the nobility, and he is more hostile towards them than is usual. The knight to whom he was made a squire was of a low status (I imagine the family pawned him off at the first opportunity due to the mutual animosity poisoning their happy home), but at least this knight treated him warmly. I haven't come up with a name for the family yet, but I will when it becomes important.

I thought it best to figure out which castle he calls home. I made a quick-and-dirty origins map; this is just a copy of the hexmap with gigantic (72-point font size) numbers on it, so that when viewed all on one screen they are legible. Red numbers are castles, blue are monasteries and cloisters (in which priestly types are trained; more on this later). Note that blue #4 is the cathedral in Ebrac; there is also a castle in the city, but PCs won't be from there. A die roll makes Loys from castle #12. 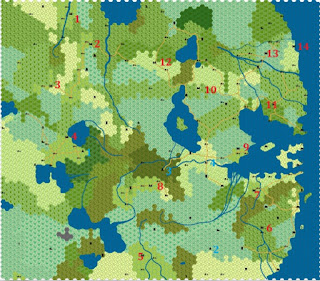 I was inspired by a random 'your PC might be...' statement in the rulebook to make Loys' first adventure start as he is coming home from the Crusades. The first scene will find him still aboard ship with his squire Reynaud, who is the other Knight I rolled up (and who remains 1st rank). Reynaud is from castle #10, of a noble family who are more secure than Loys'. He's either Loys' squire because the families are connected by alliances and possibly intermarriage, or Loys' took him on to spite his family by having a squire from a rival house. I haven't decided which yet, but either way it will breathe a bit of life into the setting. At some point after I started playing I had a flash of inspiration about events that befell this pair of stalwart crusaders in the month or so before the start of game time; but this will all be revealed in play, as random events are interpreted around it.

Rather than justifying the rest of the PCs' presence on the boat with them, I have elected to have them gradually introduced over the course of the game. But I did want them to all start knowing Loys, and possibly each other. And as they all have skills and abilities which would benefit a party of adventurers, I scattered them around an area of the map so that, should Loys decide he needs the services of one of them, the journey to where they (probably) are will provide extra opportunities for exploration. I left the Elementalist (shaman) and two Barbarians out of the mix, though. They will show up together at some point when I have need of them, but they would not have any obvious connection with the more 'civilised' PCs.

For inter-relationships, I naturally turned to the NPC Relationship Table in Star Trader. I rolled once for each PC to determine their relationship with Loys, and then once again for each of them as if they were a 4-person ship crew, i.e. one roll relating to a randomly-determined other character.

Here is a summary of the other PCs:

Reynaud the Knight is Loys' life-long friend (being his squire, he looks up to him as an older brother, perhaps even a surrogate father). Reynaud is secretly an enemy of Ysmena the Sorceress, and is waiting for his chance to strike.

Ysmena the sorceress: Blames Loys for a past event (the death of the abbot who taught her sorcery at the monastery). She knows a dark secret about Hubertus the Priest.

Fr. Hubertus the Priest is Loys' friend, but only through guilt. He is an old (and these days, ex-) friend of Claricia, the Assassin.

Claricia the Assassin is one of Loys' cousins, who are amongst the gentry living in Ebrac; she's a bit cold towards him. She shares a secret past incident with the Priest. Whatever it is that she and the priest did, it seems to have ended their friendship, and caused Hubertus a lot of guilt besides. I wonder what they will do when they discover that the sorceress knows the horrible truth...

The sorceress learnt magic in the monastery at blue #1. The priest took orders at blue #2. The Priest profession is in the Players Guide; it represents not the average clerics, but the philosopher priests like Thomas Aquinas or Averroës. I almost used Albertus Magnus and Roger Bacon as the examples, but in Dragon Warriors legends are all true, so the former's alchemical pursuits make him a Sorcerer, whilst the latter is a Demonologist.

a screen's worth for starters

Since the adventure necessarily starts in just a small portion of the map, I made a sub-map for the beginning. Focussing the map on Ebrac, I cropped it so it displayed 30 settlements on my screen, and numbered them. The knight's ship will be heading for the city, and from there adventure can compel them in any direction. I spread the other PCs around the map at the whim of my d30, and gave them each a reason for being there via Mythic. All will be revealed as they come into the story, but for the moment:

So now everything is prepared. Next post: the adventure begins. 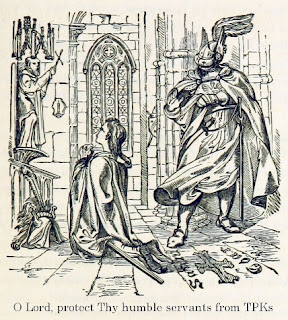 Email ThisBlogThis!Share to TwitterShare to FacebookShare to Pinterest
Labels: Dragon Warriors, let me tell you about my character, sandbox