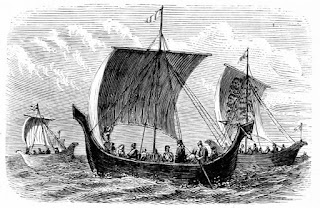 Setup: to the ruins

[Since Ailbert has joined the party, I took him off the NPC list. He is still technically an NPC, but as he now owes his life (and probably his continuing freedom) to people he knows he cannot best in a fight, there's no real chance of him turning against them. And as a serf who deserted the military for a life of banditry, he's not exactly going to be part of any great kingdom-shattering conspiracies...]

Having released Ailbert from the Earl's dungeon, Loys returns all his possessions: his armour, sword, purse (59 florins), potion, and even gives him the other brigand's crossbow. Despite his dramatics the earlier day, or perhaps because of them, Loys believes whole-heartedly in Ailbert's repentance, and has bid Ysmena and Reynaud mention no more of the circumstances which led him into their fold. Indeed, Loys is overjoyed to have a new comrade-in-arms.

The journey north to Whitethorpe is agreeable. They encounter a band of four knights travelling south, but after a friendly greeting and some polite if idle discussion, both groups continue their separate ways.

When they reach Whitethorpe, Loys heads straight for the docks, hoping to secure passage on a merchant ship travelling west.

He is told that the good people of this village are simple fisherfolk, and aren't in a position to act as ferrymen. Perhaps a merchant vessel will put in soon. They expect another in a week's time or so [1d6= 6 days].

After a short discussion, it is deemed more prudent to wait for passage than to set off overland through hill, dale, forest, and moor. They are ill-equipped for a protracted wilderness excursion, and funds are rather short (129F between the four of them).

They take cheap lodgings in the common room of the inn [1F/person/night]. Ailbert offers to pay it all himself, out of gratitude to his new comrades. They subsist on cheap fare [1f/person/day for food], and generally spend their days in relaxation. Loys does buy some provisions for their journey [21F=21 days rations (~5days each)].

[Q: Can Ysmena cure all Ailbert's wounds without the sorcery being noticed? 50/50: 01, Exceptional Yes! no one pays her any mind.
Q: Anything of interest happen in town? Somewhat Likely: Yes.
What? PC Positive - Loys - Befriend riches]

After a few days a small merchant cog does sail up to the village. The captain is intrigued by the knights staying at the inn, and strikes up a conversation with Loys. he is so impressed by Loys' tales of valorous deeds, that he offers free passage to the knight and his companions.

The next morning they sail east for Yeding's Mire, which they reach by early afternoon. They find more cheap room and board at an inn [14 more florins spent] with the intention of setting out first thing the next morning. 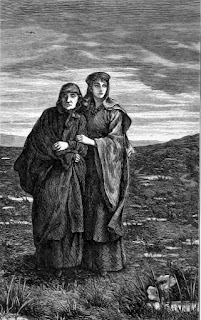 Having been together for so many days without a break, and having recourse to no other society than each other (Loys' merchant friend wished not to talk to the great knight's subordinates!), Reynaud and Ysmena were starting to vex one another. They did not speak much, and when they did they would usually bicker. Loys and Ailbert seemed oblivious to their animosity, but there were certain eyes in the village of Yeding's Mire that took notice.

Ysmena decides to take an evening stroll to get away from Reynaud and clear her head. A village woman walks quickly up beside her.

"I see they way those two treat ye, those knights," says the woman. "I don't see how ye can tolerate being used so ill!"

"I have my reasons," says Ysmena cautiously.

"It amuses me to have them about. And when I'm finished... well, then they will be no more use to me."

"Wherefore do you ask? Do you wish to buy them off me?"

"Revenge? On those two buffoons?"

"They are wicked men, I tell ye. Violent scofflaws, the pair of 'em. 'Twere a twelvemonth or more back, when they ride up from the fort with a gang o' soldiers, sayin' they be on the King's Business. And what they do is they round up some of our menfolk, saying they be thieves and smugglers and bandits. And they had a man read out the legal writ, and then the knights and the soldiers all fall on them with their swords, chopping them all up to a man, and laughing all the whiles. They killed my only son, and I aim to kill them for their foul deed."

"What an awful tale! Had I but known, I would not have trifled with these -- these brigands! O, unworthy of the name of knights! In fact, Loys attentions towards me were becoming more openly dishonourable of late. Perhaps it is time to divest myself of such unwholesome companions."

"I shall. But how shall you have your revenge?"

"I shall call upon the spirit of Mother Earth to swallow up the villains. But I cannot do it alone, for those so-called knights 'd never follow me away from the village. So ye'll help me?"

"Tell me what I must do"

"Ye shall lure this proud knight away, down to the shore, and out of sight. There are two great trees, dead pieces of driftwood, lying upon the beach n a cross. Say to him, that ye have noticed his affections, and that ye be leading him down to this secluded spot for a tryst. Give unto him to drink this poisoned wine. When he drinks the wine he shall be helpless. And I shall have the spirits dig for him a grave, and cover it all up as he wakes."

"I shall lead him down at sunset. Follow us: not close, but swiftly. And we shall put down this cur for good."

Ysmena takes the flask of wine, and rushes off to find her 'suitor'. She apprises him of the witch's plot -- for Ysmena is sure the woman be one -- and they two devise a counter-plot. Reynaud and Ailbert go on ahead separately, hoping to find a good hiding spot near the great driftwood cross.

[None of the PCs are wearing their armour. Ailbert has the crossbow, Loys and Reynaud their swords.

Tracking rolls for both: Reynaud failed and went the wrong way, Ailbert found it.

Q: Does the elementalist bring backup? Very Likely: No.

Loys is pretending not to notice they're being followed, but the elementalist will have a chance to detect Ailbert.

Q: Does this ruse succeed? Likely: 96, Exceptional No.] 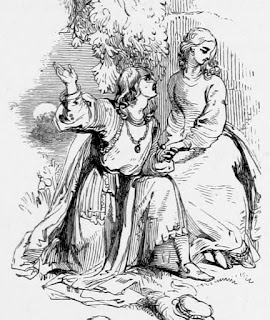 Loys sits on one of the huge pieces of driftwood, his back ever to the way they had come, and the approaching witch. Ysmena spreads a blanket out upon the sand, and bids him sit. She pours him a cup of wine (both blanket and cup have been stolen from the inn), and he pretends to drink. Soon he pretends to be sleepy, stretches and yawns like a stage player, and lays down upon the blanket. He pretends to snore at first, but a swift kick from Ysmena put an end to that farce.

The witch comes round to see Loys lying prone upon the blanket, and Ysmena standing over him. "So ye gave him the wine?"

At this, Loys eyes snap open. He sits up, looks straight at the woman, and says, "Well, then, why don't we try to settle this matter reasonably."

"I'd sooner see ye die!" screams the witch, and raises her arms above her head. Her hands seem to crackle with raw elemental fury, and then the very sand and stone beneath her feet surges towards Loys, battering the knight like a great earthen wave. Loys lets out a single sharp cry then falls back, bleeding from a thousand cuts and abrasions.

That counted as a surprise round. Initiative for Round 1 goes to Ysmena]

Ysmena recovers from the shock, and without thinking spits out an incantation of her own. A bolt of white-hot fire springs fort from her outstretched hand, enveloping the witch. Her scream is as short as Loys'; she falls lifeless to the sand, her charred flesh sending forth a cloud of foul smoke. 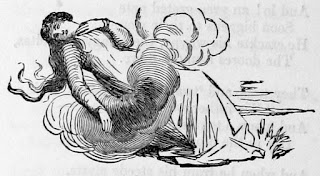 Ysmena rushes to Loy's side, and finds that he yet breathes. She speaks a potent healing charm, and the more grievous of his wounds are closed as if they had never been [casts lesser healing, twice, restoring him to 2hp. But since his HP fell below zero, he must roll on permanent wound table (DW p.208). He suffers an injured joint, reducing his REF by 1 to 8; this reduction pushes him below the 9-12 threshold, so he suffers -1 to both Defence and Evasion for the low attribute.]

Loys sits up, and looks round in confusion. "What just happened?" he asks. "Did I accidentally drink the wine? Everything hurts..."

"So sorry, my lord," says Ailbert. "I wasn't fast enough. That witch used her sorcery on you and I feared you slain! The good lady Ysmena cut her down with a lance of flame, and then spoke an arcane formula that wrenched you back from the very jaws of death!"

Ysmena looks down at Loys. "I suppose we're even now, knight."

Ysmena then bids Loys rest whilst she and Ailbert collect wood to start a fire. Once it has blazed up, they throw the witch's corpse atop it. "Should anyone in the village ask," explains Ysmena, "the witch used her foul curse, which nearly killed you. I pushed her into our cooking fire, and she died. I think the villagers need know nothing of my own sorcery."

[Q: Was the elementalist a respected member of the community? 50/50: No.
Q: Do the villagers believe the PCs' version of events? Somewhat likely (since no one likes the witch): Yes.]

When they get back to the village,it is very late. A sheepish-looking Reynaud helps his master abed, and they all pass a fitful night in the common room of the inn. At midnight, Ysmena's depleted magic is restored to her. She calls upon all the occult power she is able [spends all 4 MP] to heal nearly all of Loys' wounds [Lesser Healing x4 puts Loys back up to 10hp] in hopes that it will cure his snoring. 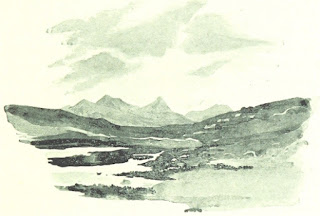 They leave Yeding's Mire early the next morning, and begin their trek to the ruins. They walk nearly the whole of the day over grassy hills and through the moor, skirting around the tallest hills (and avoiding the fort and tower). Not a soul do they meet on the journey; indeed, save for a single stag [random encounter], they see not an animal at all.

They make camp in a copse at the bottom of a hill. The ruin's tower is visible in the distance is the late evening light. They dare not camp any closer -- it is said to be haunted, after all.