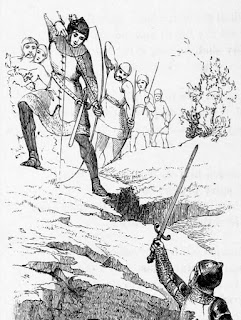 As Loys emerges from the darkness of the underworld, his eyes are blinded by the bright, yet overcast day. When his vision clears, he is greeted by the sight of a dozen or more archers, arrows nocked and aimed right at him.

[The idea to have soldiers surrounding the PCs came to me as a result of the above picture, which was sitting in my Dragon Warriors folder simply because it's the top half of the picture I used back at the end of scene 6 (though in both pictures I had to photoshop out the horse; more on this anon).

"Ho, lads! Stand down!" calls the lead archer. "These be not fell beasts that emerge from the accursed hole, but men: good knights and true. And a lady!"

"Indeed we are a band of brave knights," says Loys modestly, "but who be ye?"

"That we do," says Loys, "and it was bought by dint of much steel."

"Well the Earl will want to pay ye with much prettier metal than that! Come! we ride for Fort Merl forthwith."

"His Grace is there on an errand. He gave orders to come immediately when ye'd found the book. I'll even let ye all have some of our horses for the journey. Consider it my repayment for the service ye've already done us. For had you not come out of that hole with the book, me and the lads were to go down and get it ourselves!"

Setup: return the Tractatus to the Earl

[A random event back in Scene 8 revealed (to the GM-me) that the Earl would be away from home when the PCs took the book back. I rolled a die on my d30 area map to find his location.

The journey across the moors is uneventful, and by nightfall they have reached Fort Merl. The Earl of Avincester is there there to greet them. He orders the best possible quarters prepared for the knights and their fair lady companion, and apologises profusely for the rough nature of the fort's accommodations. He does not reveal what errand has drawn him away from his own castle -- nor are his guests so importunate as to ask.

[Q: Does the Earl know of Loys & Reynaud's crusade news yet? Likely (3+): O1 C5, No. (I will increase the likelihood by one step per fortnight from now on for anyone who might hear such news).] 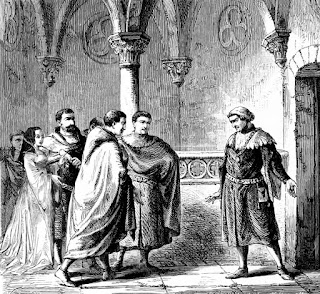 Once they've had a chance to rest, the earl receives them privately in the commander's private dining hall. Ysmena hands him the bejewelled tome, and as he opens it, his eyes go wide in amazement.

"You've found it! You've really found it. My search is finally at an end! Of course, you'll be wanting a reward, and one is richly deserved. Here..."

So saying, the Earl rips both of the golden, gem-encrusted covers off the book and tosses them on the table before Loys.

"These should fetch a pretty price in Ebrac," continues the Earl as if nothing out of the ordinary had taken place. "And now, as you've proven yourselves in this endeavour, there is another small matter for which I humbly beg your assistance..." 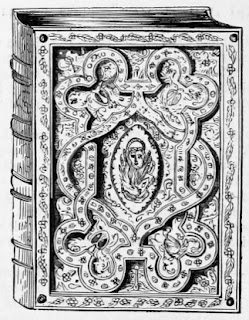 [And thus the first adventure draws to a close. so it is time to tally up the rewards.

The sale of the book covers will net enough to rest up in Ebrac for about a week and purchase normal horses for party, +7 days provisions each. This is by DM fiat, since if the PCs have horses, it will be much easier to grab pictures of knights out of my image folder. The rest of their treasure will be spent as normal.

Experience Points:
XP from combat are equal to the Rank (or Rank equivalent) of the foes defeated, and distributed by the DM amongst the PCs participating. So--

Loys gets the XP for his duel with Sir Cressin (scene 5), but since it wasn't a duel to the death, he only gets half. Sir Cressin was 3rd rank; I'll round up for Loys' noble deed: 2xp

The brigands in scene 6 were both 2nd Rank, so 4xp must be divided between 3 PCs. Reynaud seemed to fight the best, so he'll get 2xp whilst Loys and Ysmena get  each. Ailbert does not earn any XP for being defeated.

Ysmena took out the 1st Rank elementalist in scene 8 with a single spell, so she earns the 1xp from that.

Finally, everyone gets 5xp for completing the adventure.