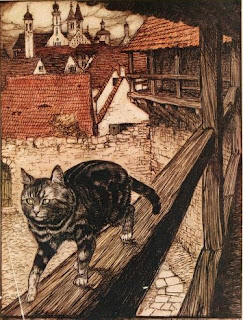 Travjane can almost ignore the morning sunlight streaming in her window, but the plaintive cries of a cat outside it cannot go unheeded. "I'm trying to sleep!" she tells it fruitlessly. She soon realises a more direct approach is needed, and goes to the window to shoo it away. "Get lost! It's far too early to listen to your racket. If you're someone's familiar, can you please come back later? Otherwise, I don't want to know!"

The cat stalks off across the rooftops, leaving the witch to wonder if there will be any repercussions for her rudeness. Her head is pounding, but she fancies that's the wine's fault rather than another witch's curse.

She stumbles down the stairs into the inn's common room. She gives the barmaid four silver talers for last night's room and board, and another four in advance for the room and breakfast today; she assumes she'll grab some sort of lunch whilst she's out doing her errands, and that half-elf had better be buying dinner if he wants her help.

A quick repast of black bread and fatty bacon puts her head to rights, and she soon sets out into the quarter in search of information. The streets are a veritable maze of shops, wholesalers, middle-men, moneylenders, and warehouses. And every conceivable space in the public squares is taken up by the stalls of less-permanent vendors.

At one point she passes a dwarf sitting at a simple wooden table, behind which a carefully-lettered notice tacked to a post reads 'Recruiting for Expedition into the Finsterkamm' in Garethi and (she assumes) Rogolan [dwarfish]. At the bottom of the notice someone has hastily scrawled 'magicians wanted'. As much as she has no intention of joining this dwarf on some mad adventure, Travjane is at least comforted by the thought that her magical skills will save her from penury.

On another street, Travjane sees an guild wizard (judging by his clothes and staff) taunting a goblin shaman (judging by her headdress and bone necklace). She feels like she should step in and say something, but she doesn't want to risk a certamen arcanum with the mage, which would almost certainly end in tragedy.

[It took two streetwise rolls to find the shop she was looking for, and so two encounter rolls.]

Finally, in a dim and cavernous side-street, she chances upon the Emporium Mirorum [Latin Bosporano for 'The Shop of Wonders']. She could tell this was the place the moment she saw the window display.

[The merchant--
Personality: Austere, Placid
UNE Motivations:
1. promote the elite (high-class clientèle only)
2. secure disbelief (it's all really magic! really!)
3. operate hardship (will buy artifacts cheaply to 'help' those whose finances are distressed)]

The interior of the shop is dim and dusty, and filled with a bewildering array of bones, specimens, scrolls, codices, tinctures, powders, objets d'art, tchochkes, and other curiosities. Travjane would love to stay and browse, but she is driven on past them by her purpose.

The shopkeeper eyes her warily as she approaches his counter. She sees him look her up-and-down, and make a veridical yet still insulting appraisal of the status of her purse. "May I help you?" he asks, nonetheless.

"I've had an item stolen from me by bandits," replies Travjane, "and the person from whom I received it said it may have ended up here, since only you deal in such rare and wonderful goods."

"Miss, you insult me! I assure you I wouldn't receive stolen goods from bandits."

"Oh they didn't look like bandits: more like respectable knights. But they robbed me on the road, so..." Travjane relates the encounter in forest as briefly and, she hopes, in as heartfelt a manner as she might.

[She needs to make a Fast-talk (Courage/Intuition/Charisma, skill 2) roll to get anything useful. Modifiers are +2 for Good Looking, but as this is not strictly business she gets -2 for being a peasant and -1 for her witch's streak. She rolls 6/9/1, a success even with the -1 total penalty. So,

"In point of fact I did see a box as you describe. It was brought here by an armoured [d6=] man just a few days ago to be appraised. I couldn't open it, so I couldn't put a value on it. It's a nice enough piece to look at, but, well..."

"What did this man look like? Did he wear a jewelled brooch in the shape of a peacock?"

"He might have done. I didn't take much notice."

"Can  you describe him to me? Only, he didn't take off his helmet when he robbed me. I saw his lance, his sword, and his greedy gauntleted fist."

"I'm sorry, he made no impression, and when I said I could not help him he left."

"Please try to remember. It's important. I'd hate to have the town magistrate get involved..."

[this tactic requires an Intimidate (Courage/Intuition/Charisma, skill 3) check at -2. Rolling 17/15/15 is a failure, so Travjane spends a Fate Point for a complete re-roll: 10/9/2, success.

"Fine. His name is Decius Kleiber. He's one of those rapscallions from the academy, I think. Perhaps you should go there to find your box. And keep your troubles away from the good people of Weihenhorst!"

This is more than Travjane expected, or bargained for. She hastily takes her leave, and goes out into the street. She sits down by a public well to have a think. As she's sitting there, she sees a unit of 20 city guards raiding a produce seller's shop [random encounter]. The sight convinces her she'd do her thinking better somewhere like the inn -- lest she be arrested for vagrancy.


On her way back she once again sees an altercation involving a mage -- the same one, in fact, that she saw earlier. But this time it is the rather frightened-looking mage who is cowering under the withering abuses heaped upon him by a angry Thorwaler lass, who seems to regard the goblin as a close friend. Travjane can't help but smile as she walks past.

Travjane sits alone in her room at the inn and thinks over her situation until the evening. She had been fairly certain she would agree to help the tailor, but now she is trying to think of a way for him to help her in return.

He comes to see her as promised, and offers to buy anything on the inn's menu she likes for dinner -- price being no object. Travjane gratefully accepts, but says he needn't worry about  extravagance. As sure as she is that he could afford it, she just can't see the two of them eating an entire haunch of beef [120s (and 35kg) per the rulebook]. Darian puts in their much more modest order and comes back to the table with a flagon of the wine Travjane had seemed to praise the most the night before. He tries to make small-talk as he pours, but the witch cannot keep her decision bottled up any longer.

"So I've thought it over," blurts out Travjane. "You know people in this town, right? I mean, people that matter, you've met them... in a professional capacity at least."

"I'll let you know when I have figured that out."

Threads: revenge, the ivory box, get the needle

[Now that she's got a definite task in Weihenhorst, I'll be switching scenes more often. Also, despite a full meal, she and Darian drank a lot more wine to celebrate thier new partnership and toast the success of their undertaking. And Travjane failed her carousing roll.] 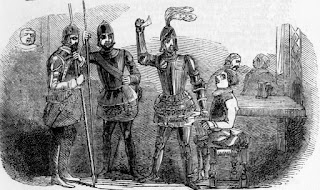 Travjane comes down to the common room a little past mid-day, bleary-eyed and still a bit unwell. She drops a few hellers on the bar and asks the barmaid to bring her something curative. She is sitting alone at a table, throbbing head in her hands, when a three city guardsmen burst in. One waives an official writ in the air as he accosts a frightened local merchant.

"We're looking for a young woman," shouts the guardsman. "A stranger, black hair streaked with white, a cheap dress, goes barefoot. Have you seen such a person?"

"You! come with us. We've got orders to bring you to the captain for an interview. And don't try anything funny. There's [1d6+2=] six of us, and we won't take kindly to any witchcraft."

Travjane stands, and walks right over to the guardsman. She snatches the writ from the leader's hand, and looks it over.

"Who said I have a cheap dress?"

"Sorry, miss. This is the description we've been given."

Travjane is all sweetness and smiles as the guards march her across town. She does her best to make light of the situation, and by the time they have reached the town hall the guards are all laughing and joking with her [Seduction roll (+2, -3) succeeded].

She is shown into the Captain's office, where all levity abruptly ceases. 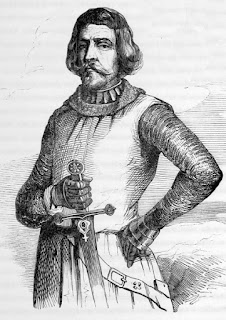 "We've heard," says the captain sternly, "that you have been asking after the good Sir Decius Kleiber -- and making serious allegations, which, were they true, would besmirch his noble and decent reputation. And as he is such a respectable and important person, I can't imagine how your -- shall we say -- accusations could be other than fabrication, or -- more charitably -- simply misplaced. Perhaps the unsettling nature of being robbed by bandits has clouded your memory of the event, caused you to fill in details that you didn't see clearly with things you've come to hear later on. Else -- and I'd hate to think this were the case -- your words could be construed as baseless slander. And judged rightly and harshly for such by the Law. Do we understand one another?"

[Travjane needs to make a Willpower (Courage/Intuition/Charisma, skill2) check to avoid this setting off her Vengeful disadvantage. She rolls 19/8/10 - he's added to her enemies list.]

"Oh, we understand one another perfectly." 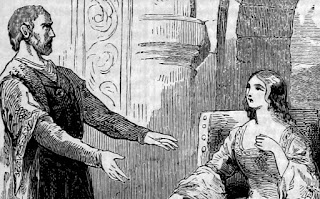