Travjane is awakened from a sound sleep by the din of Darian's apprentice opening up the shop. She lies still in her bed for a while, listening to the rain pattering down against the shutters. She hears movement in the rooms below her -- the tailor must have slept in too. She throws a wrap on and goes down to the kitchen herself, hair undone and still favouring her injured leg. She finds Darian slouched at the table, barking for his apprentice to get him some food, make a fire, and brew a pot of something medicinal.

He looks up at the limping witch. "You look like I feel," he says.

"I didn't mean to wake you, just see if you'd made it back. I lost track of you before the show started. I went to the Rose & Sceptre after, and I waited and waited, but you never appeared."

Setup: take a step back and consider situation(s)

[Some die rolls & game mechanics to round out the last scene:

There was a random encounter indicated during her way home across the quarter (see below).

When she got home she tried casting Balsam Salabunde (healing spell). The first roll failed due to the -1 penalty for Pain (costing 2AsP). The second casting succeeded (6AsP, 6LeP restored).

Q: Does Kamillio go to the authorities? Unlikely (5+) as he is culpable in the matter as well: O3 C3 - No, but... he might pursue matters on his own.
+EVENT: Move toward a thread - revenge against Captain- Assist / Home (see below)

And finally, Kamillio got his Perception roll to notice the tailoring of Travjane's dress: 5/15/17 failure - he doesn't recognise Darian's handiwork.] 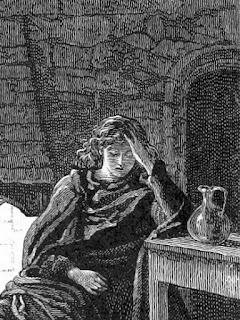 Travjane regales her friend with an exacting account of the previous night's events, making no attempt to conceal the ridiculousness of her failure, nor exaggerate the danger which she faced (she's certain that her magic could best such a one as Kamillio).

"...and so then I ran all the way back here," she concludes. "The streets were pretty empty, so I don't think anyone saw. And I certainly wasn't followed. Oh, but who would have followed me then? I did see an extraordinary number of city guards about. I even saw about a half dozen of them raiding another shop [random encounter].

"Yes," muses Darian, "the Captain does seem to be having a lot of places raided lately." [event - Assist/Home]

"I heard he was into blackmail."

"It's been said. But he claims to be cleaning up the city. And there isn't a single person he's brought in who wasn't guilty of something underhanded, so the merchants who keep themselves clean haven't felt the need to move against him."

"But someone must want to, mustn't they? Jealous rival, resentful underling, that sort of thing."

At the words 'resentful underling', Darian's eyes flit unconsciously toward his own apprentice. But then he thinks Travjane's suggestion over for a few moments.

"There may be someone... I heard that a certain mage is finding him... an inconvenience."

"The captain doesn't give the guild its due, or respect its rights overmuch." [Carelessness / Legal matters]

"I didn't think there was a guildhouse in town."

"There isn't. But we get one or two wizards through here now and again. Mostly on their way to and from the Mage's tower."

"Some Aranian, from Baburin I think. She stays in the wealthy quarter, at the Twelve Arrows, the fanciest inn in town."

"How should I know? Anyway, why do you care?"

"No, I mean about the Captain."

"He doesn't respect my rights overmuch either. And that will be his last mistake. But first, we have unfinished business with Kamillio to discuss."

"Well, unless I can take down the captain, I'm thinking blackmail and extortion are out. That leaves a trade -- a decent one, this time -- or...?"

"That was actually your cue to give me a new idea..."

The two sit silently for some time. Darian's apprentice slams breakfast down on the table before them then goes to open the shop. Darian doesn't take any notice of his attitude, nor does Travjane, who at one time thought the animosity here was worse than she had fled back home.

"Why not? I need to go talk to the cobbler as well."

Setup: talking in the merchant's quarter 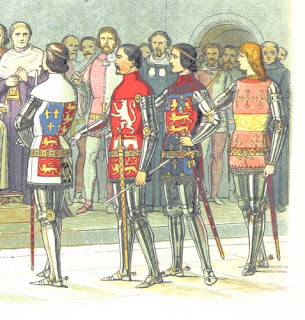 It is well past mid-day when Darian and Travjane emerge into the quarter. As they are turning into a main thoroughfare, Travjane espies a group of Academy cadets, all dressed in armour and regalia. She grabs Darian's arm and pulls him forcefully back into the side street.

"what are you doing?" asks the astonished half-elf.

"Ssssshhhh! I don't want them to see me!" whispers the witch.

"Who? Them? Why are we hiding from those cadets?"

"I've heard they cause all sorts of problems here in town, and well, I don't want to be in the middle of a game of taunt-the-witch, do I?"

Travjane feels a slight twinge of guilt at the deception, but Darian accepts her half-truth at face value. They find another way to Linnert's shop.

[Travjane also gets a Perception roll, but at -4, to have noticed any peacock fibulae: 11/5/20 - unsurprisingly a failure (so I'm not asking Mythic if one were even present)]

When they reach Linnert's shop, he once again ushers them into the back room, and again castigates Darian for bringing 'the asset' to his shop in broad daylight.

Linnert listens to Travjane's historia calamitatum impassively; the witch can't quite tell if he's amused or angry or concerned, or some combination of the three [Empathy roll 17/15/20, failure]. He sits in contemplative silence for a few moments when the tale is concluded, then offers up his advice [UNE:scheming - proposition - treasure].

"He'd rather a nice weapon than that needle," says Linnert. "Maybe you should get one that he'll make a trade for."

"We, um, tried that," says Travjane, "or weren't you listening?"

"What about trying a real trade."

"You mean, a legitimate one?" asks Darian.

"Fancy that!" says the tailor, throwing up his hands in frustration. "And just where will we find something of such great value that Kamillio will happily give up his prize for it?" 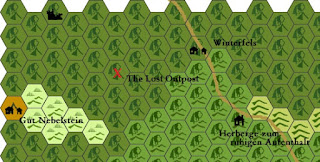 "We could show her the map," says Linnert.

"The map? You imbecile! The map was to be her reward!"

"We can join them later," says Linnert dismissively. "The point is the lost outpost*... and its treasure. The story goes that the outpost was built to guard something important, but I could never find out what that was supposed to be. It was overrun during the second Ork-Storm**. The great heroine***, Lidde Maurenbrecher, is said to have fallen there, but her body was never recovered, even when the ork horde that overran the place was slaughtered at the battle of Winterfels. Her armour, her shield, her sword -- none of it was part of their trophies. But the handful of survivors, who escaped the outpost before its fall, all agreed she died in the fighting."

"Wait!" says the witch. "You want me to recover her sword as a trade for the needle? Doesn't this seem a little excessive?"

"Well," says Linnert, "the map was going to be a reward. Just think of the other treasures that could lay buried there! And a chance to know what happened to one of the great, legendary heroes of the past. Aren't you the least bit curious?" 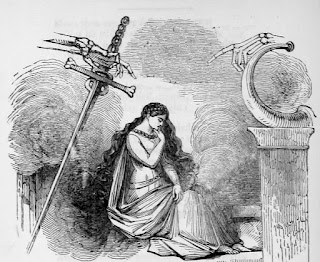