Into the Odd solo - setup 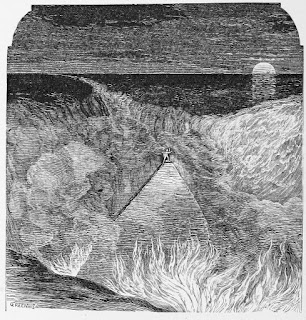 Back in January I picked up a copy of Into the Odd. Normally I don't get on with rules-light games, but this one was just unusual enough to tempt me (there's a free version here which might tempt you, too). Besides, I've been concentrating on verisimilitude for a long while now, and a bit of abject surrealism sounds like a fun change.

In keeping with the simplicity of the game, I decided set-up shouldn't take more than an hour. The initial adventure was going to be 'take X from A to B'. I wanted both dungeons and wilderness to explore, so the first thing to do was set up a sandbox. Hexographer is great for random terrain, so I tweaked the settings to make them weird enough. I put the starting city and the destination city on the map, and that was that. Everything else would be discovered in the course of the game. I'm not entirely sure what some of the terrain is yet. 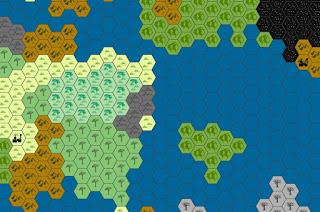 Every time the party enter a new hex, 1d6 and 1d30 are rolled. There is a 1-in-6 chance of an encounter, and about a 47% chance of a feature (I'm not entirely happy with this table and will probably be changing it, but it has been fine so far). When the party retrace their steps, there is still the 1-in-6 encounter chance, but no new feature roll. I've been playing the adventure with Hexographer open, adding fortifications and features to the map as they occur, and putting an X in every hex they pass through that comes up empty so I know not to re-roll the d30 for features. The Xs are put in with the 'GM Only' box ticked, so I can hide them all and have a nice map without the clutter. 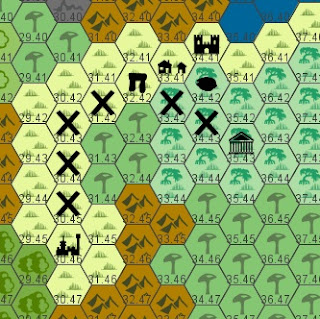 I've been using the d30 Sandbox Companion's NFP: Natural Features & Phenomena By Terrain Type to generate the Special features, and various other tables (e.g. CK2: Patrol Size and Makeup for patrols) as needed.

If the party camp out in the wilderness, there is a 1-in-6 chance of a nighttime encounter. Nocturnal settlement encounters can be avoided easily if the PCs have somewhere to stay; otherwise there's the usual 1-in-6 for something untoward to happen.

Since getting underway, I've had some additional ideas which would make the hex-crawling a little more interesting, but those will have to wait until I've turned them into something coherent.

It probably took longer to write this out and post it than it did to actually set it up, including character creation. Speaking of which, here are my PCs:

Next post (tomorrow) -- the adventure begins !
Posted by Alea iactanda est at 11:09

Email ThisBlogThis!Share to TwitterShare to FacebookShare to Pinterest
Labels: Into the Odd, let me tell you about my character, sandbox, solo toolbox