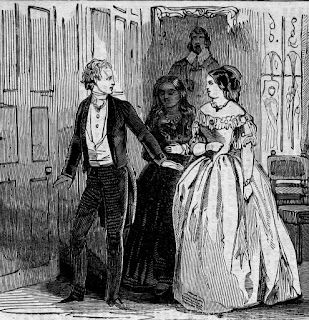 The scientist's warnings go unheeded. The explorers are determined on having an interview with the mysterious count, and despite his protestations, they take his key to the sub-sub-basement, and descend into the Count's subterranean lair. 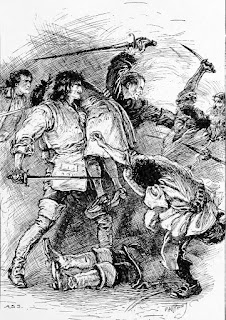 So it was time to read the detachment rules... That done, I created 2 detachments for each side, loyal soldiers vs. enraged servants; their attributes were rolled up on 3d6 in order, and they each got d6 hit points.

The servants need to hold off the soldiers for 3 rounds in order for the PCs' encounter with the Count to play out with no interruptions. I'm no wargamer, so I have no idea how to write up a mass battle in an interesting fashion. I tried reading a few pages of Caesar to use as a model, but there is no way I can approach his eloquence. Thus, this is going to be mostly game mechanics. Mea maxima culpa.

[round 1]
I rolled a d4 to see which of them counted as the leader of the more bellicose side; 1d4= Servants-B. They then had to make a Dex save to win the initiative; d20=2, the servants attack first. The battle starts with A vs A, B vs B. Since there are no 'to hit' rolls, I'll just record who takes what damage.

The soldiers discharge their muskets into the mob of enraged servants, who retaliate with a volley of hurled cutlery, garden implements, and the occasional objet d'art snatched in anger from a mantelpiece. Neither side inflicts many casualties on the other.

The mob surges forward as the soldiers are ordered to fix bayonets. Blood stains the floor as the two sides clash. 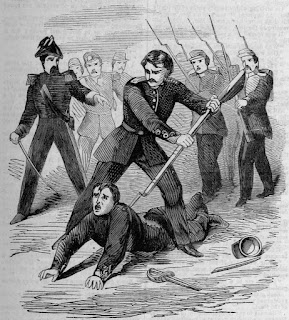 One wing of the soldier's army has suffered terrible losses as the gardeners charged with their pruning hooks. The survivors beat a hasty retreat, throwing down their arms to run faster. But the victory is short lived; for the other soldiers are moved to acts of greater heroism by the disaster, and they cut through the enemy ranks with such ferocity that not a groom nor a parlour maid nor e'en a footman is left standing.

The remaining servants cannot stand against such might. They flee every which way to safety. 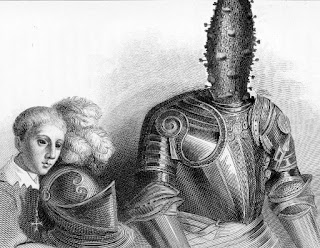 The explorers descend to the vaulted room deep below the castle where the Count is confined. The sight -- and smell -- that greets them makes them shudder with revulsion.

The Count has transmogrified into some sort of immense, grey-green fungus, covered in waving cilia and swollen pustules which leak a thin, yellowish fluid. He (it?) sits impassively upon a simple wooden bench, clad in a costly suit of lacquered steel armour, which is pitted and corroded in places.

Beside him sits his page, a tow-headed, angelic-faced lad, holding his lords helm with great reverence. He has no eyes, just empty sockets in his head, but is otherwise clean and healthy, in fact pristine. Everywhere else in the room is covered in slime and rot and residue, but the page is touched by none of it. The lad is completely silent, but the Count now and then gurgles something to himself.

"Please, my lord," says Aurélius tentatively, "we would have a word with you, my lord."

[I rolled a random Mythic scene to determine how meeting with count goes: PC negative - Refuse / Masses. The result made me instantly think 'masses of refuse', so...]

The Count-thing rises as if to address his guests. But instead he spews forth a mass of stinking green filth over them, a filled with bits of bone and rot. The explorers scatter, trying in vain to avoid the spray.


[Round 0 - PCs are surprised]
No one avoids being spattered by the filth entirely, but Fridoline and Gregor [failed Dex saves] get the worst of it. Gregor slips, his arms windmilling in an attempt to maintain his balance. Poor Fridoline slip and falls right on her bum.

[Round 1]
Disgusted though they may be, they are yet unfazed by the grotesque display; the explorers leap to the attack [Aurélius makes a Dex save d20=2: PCs win initiative]. But there is still slime everywhere, being squirted round the room as if a pipe had burst. Wanda is drenched in the stuff [stained], and Severin 's skin starts to redden and burn at its touch [burnt; 2 damage drops him to 12 str, no crit. It will last 2 more rounds. Fridoline also failed her save, but got another Fallen result, so there is no additional effect].

Aurélius fires his pistol at the Count, but the ball is deflected by his heavy breastplate [damage 1-1=0]. Randeep discharges her musket, hitting the Count squarely in the 'head'. Gore and foetor are splattered behind as the ball shots straight through, but the Count seems to hardly notice [8-1=7; 2 hp left]. Fridoline does not try to get up, but fires her pistol from the ground, grazing the page's impassive cheek [her attack is Impaired; 1d4=2 damage to 0hp]. Gregor steadies himself [lost action], but Wanda and Severin draw their swords and charge.

Wanda deals the page a terrible wound across his torso [5 damage puts him at 4 STR; save=2, no crit]. The lad does not cry out, nor even flinch, but instead just calmly fixes his gaze upon her. Crimson rays shoot out from his empty eye sockets, and sear into Wanda, body and soul -- but she does not falter [1 damage put her at 0hp]. Severin delivers a glancing blow to the Count [3-1=2, to 0hp]. The Count responds by smashing his face with an iron fist [3 damage drops him to 9str; no crit]. 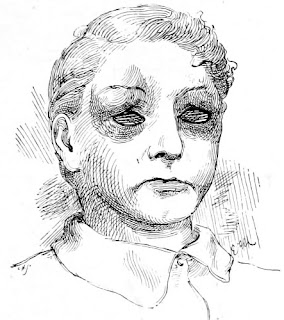 [Round 2]
Yet more sludge issues forth from the Count. Fridoline coughs and sputters as she gets some in her mouth [infected; str save fails] and Wanda slips and falls over. Severin gets some in his eyes [blinded], and his patch of reddened skin starts to blister [2 more damage from the Burnt result reduces him to 7str; fails crit save]. The pain is too great, and he faints.

Randeep draws a pistol and fires. The ball pierces the breastplate, spattering more goo [5-1=4 damage dropping the Count to 12str; no crit]. Aurélius springs forward with his sword, which hits the Count's armoured shoulder with a clang [1-1=0]. Fridoline struggles to her feet [dex save=2, ok] whilst Wanda, still on the ground, slashes at the page's legs. He topples face first into the muck, and is still [impaired attack, 1d4=3 damage, leaving him with 1 str; he fails the STR save against critical damage.]

The Count deals Aurélius an clumsy blow, which he shrugs off bravely [3 damage reduces him to 2hp].

[Round 3]
Randeep accidentally inhales some of the horrible slime [infected, but STR save=4, resisted]. Fridoline loses her footing again and topples over. Wanda gets some in her face [blinded - 2 attacks impaired. Severin is unconscious, so automatically failed his DEX save. He luckily gets a Blinded result, which has no effect. The last round of burning does 1 damage, leaving him with 6 STR].

Randeep drops her pistol and runs at the Count raising her musket over her head like a club. She bashes him across the 'face' with a great squelch [4-1=3, to 9 STR, no crit]. Aurélius stabs again with his sword, causing an eruption of chunky fluids from the wound [5-1=4 damage, dropping him to 5 STR; again he saves against critical damage]. Fridoline throws her hatchet, but it merely bounces off his steel tassets [Impaired; 1-1=0].

The Count swings at Aurélius again. One fist misses entirely, the other forces him back a pace as it smashes against his sternum [2 damage puts him at 0hp].

[round 4]
Despite the continuous fountain of filth being produced by the Count, none of the explorers seem unduly affected, or perhaps they are so far coated that it is hard to receive any more [all conscious PCs made their DEX saves; Severin failed his automatically, and becomes Infected (failing too his STR save].

Randeep smashes the musket down on the Count, but his armour absorbs the blow [1-1=0]. But it distracts him enough that Aurélius lunges right at his tumescent head, skewering it with his sword. The Count collapses on the floor, pulsating irregularly [3-1=2 to 3str, crit].

Aurélius stabs him over and over until all motion ceases. They all pause to catch their breath, and take turns searching the room for anything of interest. 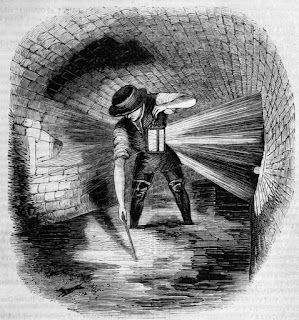 Wanda discovers the entrance to a secret tunnel, which stretches off as far as the eye can see. The explorers are debating the merit of seeing where it leads when the decision is made for them. Sounds of fighting issue from the stairwell to the laboratory, and they can hear the barked commands of an officer rallying their troops and preparing to send them down to fight alongside their lord.

Severin kindles a lantern and closes the shutter so it emits only a narrow beam of light, hopefully enough to navigate the tunnel by without giving away their position to any pursuing soldiers. Randeep's hand does appear to still be putting out an unnerving glow.

The brickwork tunnel is just big enough for a person to stand erect. The ground is merely packed earth, and in places is mired in stagnant water. It goes in very nearly a straight line, and has no branches or offshoots. After about half a mile, it becomes evident that the soldiers are in danger of catching up. Their shouts and the barking of war dogs echo down the tunnel after the explorers, as their torches come nearer and nearer.

"We'll never outrun them," says Randeep. "I've got to collapse the tunnel. Go on ahead. I'll be with you presently."

So saying, she lights the fuse of her bomb, and heads back toward the soldiers. She hurls it with all her might just as it's about to explode... 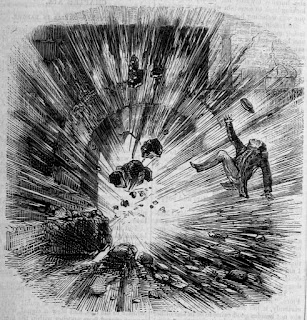 ... and explode it does, soon after leaving her hand. She had thought to collapse the roof, and collapse the roof she does, but the force of the blast throws her back 10' through the air. She comes down hard on the ground, but surprisingly nothing is broken. At least the soldiers won't get through any time soon. She limps off in triumph to find her friends.


[At some point I realised I was being entirely too stingy with treasure, so I made the blessing of Sabazios a permanent (if dangerous) arcanum.]

The Hand of Sabazios
The hand's possessor (only a human hand may become the Hand of Sabazios, but it needn't be attached to work) can call upon its power to summon a Consuming Blight Vortex : the vortex moves rapidly through a 50' diameter area, causing 1d12 STR damage to 1d6 living targets, ignoring armour. The invoker must be in this area, but need not be at the centre. A Willpower save is required in order to choose the targets. The hand's appearance does not change, but it phosphoresces in darkness -- even through any normal covering (glove, gauntlet, etc.). It does not emit enough light to read by.
Posted by Alea iactanda est at 11:46