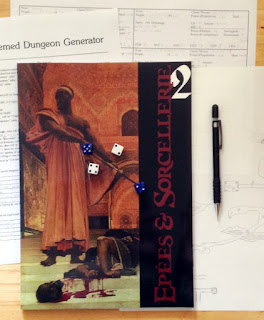 I've had Épées & Sorcellerie (both 1st and 2nd editions) sitting on my hard drive for ages. At some point I had a look at a lot of retro-clones, mostly peeking at the magic systems to see what innovations, if any, they had to offer. I didn't spend enough time with É&S, probably because I was put off by the only-uses-six-sided-dice thing; why play a D&D clone if you can't use all your dice?

I ran across it again when trying to tidy up my gaming folders, and decided to give it another look. That convinced me to give it a try. I'm rubbish at writing reviews, so instead I'll be posting a solitaire dungeon to give an idea of how it works. But as a quick summary, let me say that this is D&D stripped of its most egregious D&Disms. I rolled up some PCs, ran them through a dungeon... then immediately went online and bought a print copy of the rules.

You can download a free PDF of the 2nd edition, which is the one I play. There's also a free English translation of the 1st edition.


To start, I rolled up 10 or so characters (no fudging, all stats in order) and picked the best 8 to form a party. I'll go through character generation with one of them -- a fighter, surprisingly -- to examine the anatomy of a PC.

The six classic attributes are used, but the range is 2-12 rather than 3-18. Here's the set for my PC: Str 8 Int 9 Wis 5 Dex 10 Con 8 Cha 5. A couple good scores, a couple bad ones, but a pretty well-rounded PC -- once you get used to reading them as they are and not as regular OSR attributes.

So the character is quite smart and agile, but not terribly perceptive, nor indeed a very nice person.

Step 3 – Choose a race, and (optionally) a Cultural Origin.

The races are a standard mix: human, elf, dwarf, halfling, orc. Humans are average, the non-humans each come with a suite of bonuses and penalties. Maximum hit dice are dependent upon choice of race, but no attributes are modified. I picked human for this PC.

The cultures each come with a pair of bonuses or special abilities, all geared towards a swords & sorcery setting. Unless the GM decides otherwise, there are no race/culture restrictions. The choices are: Barbarian, Civilised, Decadent, Enlightened, Nomad, and Primitive. Your PC can also be of unknown origin.

My PC is Civilised, which grants a +1 to all social interactions and +2 for any rolls requiring understanding, knowledge, or erudition.

Language facility is also determined at this stage. A PC can know one additional language for each point of Intelligence over 7. A character with an Intelligence of 8 or higher can also read and write. Languages can be taken at the start, or left as slots for the character to learn new tongues in the course of their travels. As I was just sending a party into a dungeon in some ill-defined world, I left this step to one side for now.

Alignment is optional, and uses the basic Law-Neutrality-Chaos schema.

There are four classes: fighter, priest, sorcerer, thief. Priests have three sub-classes: hermit (nature-priest; neutral), cleric (paladin; law), and anti-cleric (cultist or anti-paladin; chaos). My PC would make a decent thief (though the low Wisdom makes it hard to detect traps), but I went with fighter instead. Even though average Strength means no XP bonus, a high Dexterity has a lot of appeal for a mêlée character.

Every hit die is modified by a character's Constitution bonus (or penalty). At first level, everyone gets a single die for hit points (1d6), except fighters, who get 1d6+1. All weapons do 1d6, or 1d6+1 damage for two-handed weapons. Monsters mostly inflict 1d6 damage as well. Mêlée weapon damage is modified by Strength, and missile weapons use the Dexterity modifier for damage (which is such an obvious rule I can't believe more OSR games haven't figured it out).

Starting equipment is apportioned by class. Fighters get: leather (or equivalent) armour if they desire it, a missile weapon, and the choice of a two-handed weapon or a one-handed weapon and shield.

My fighter opted for a short bow, a 1-handed axe, and a shield, but no armour.

Every character starts with a sack, some personal articles, a dagger, a blanket, a bit of food, and 3d6 gold pieces.

Armour Class is ascending. A character's AC is either determined by the armour they wear, or else is equal to their Dexterity. Leather armour is AC8, so my PC will eschew armour in favour of their innate AC of 10. A shield always adds +1 to AC, so my PC has AC11. Finally, there is a version of D&D where playing a Conan-type isn't immediately a fatal mistake.


Movement is also based on armour worn, and modified by Strength. No armour is MV 4, leather is 3, etc. My PC has no Strength modifier, so 4 it is.

Here is my finished fighter, ready for adventure:


For running the adventure, I printed off a blank page of Schweig's Themed Dungeon Generator and quickly filled it in. I'll be using my MCSV for any Oracular pronouncements as usual, but as it's a simple dungeon crawl I can mostly get by with the É&S2 rulebook. But I need a way to start it; perhaps with a saving throw.

Saving throws are rolled on 2d6, and succeed on a roll of 10+. A character (or monster) has a bonus to all saving throws equal to their attack bonus (at first level, +1 for fighters and +0 for other classes). Attributes, racial modifiers, and class features can all provide other modifiers.

Délia had [3d6=]five gold coins left, and no real prospects. She was sitting in some nameless tavern in some frontier town, wondering why she'd ever left the army of her native land to seek her fortune in this place. The border with the neighbouring kingdom had been settled for almost a generation now, and the evil hordes of monsters were content to stay on their side of the mountains. The hardest thing she'd had to do was balance her shield against the table leg to keep it from rolling away on the sagging floorboards.

She had just finished making what she felt was a frankly impressive tower out of empty clay cups when a pair of emerald green eyes suddenly appeared at the end of her table. They were attached to an elf, and a particularly lovely on at that, radiant with all the enchanting and ethereal beauty of the fair folk. She wore a simple tunic of bleached cotton, and a long, thin sabre hung at her side in a carved wooden scabbard, suspended from a silken baldric.

"Nice work, sweetie," said the elf, "but are you a warrior or an architect? If the latter, I'm afraid we just won't have a use for you..."

"What? Archi--? um...no. I'm a warrior." Délia was shocked by the raspiness of her voice compared to the mellifluous elven speech.

"Splendid!" said the elf, eyes beaming. "My friends and I are putting together an expedition to explore some caves by the sea. The fisher folk have been reporting strange sounds in the area, and they fear the unspecified evil lurking within. We can always use an extra fighter, and when I saw you sitting there, sweetie, well... Will you join me?"

"Of course. Now come, sweetie, let me introduce you to your fellow vagabonds meurtriers."

Délia scarcely had time to pick up her shield and axe before the elf had taken her by the hand and was leading her out of the tavern. A motley group of six was sitting at an outside table, enjoying the shade of the tavern's tattered and dusty awning. They all looked up in unison to see whom the elf had brought.

"My dear friends," she said, "I've found an eighth member for our band. Now we needn't fear the auspices, for we have made up our number in accordance with the omens. Allow me to introduce the brave... oh, sweetie, I didn't get your name."

"The brave Délia! I'm Aeyrinyllaminollanynimia, by the way. But they all call me Ayrine, and you probably should, too. Now, sitting at the end is Kurg," here Aeyrine indicated an enormous man in leather armour and a horned helmet. "As you can probably tell by his complexion and the quality of his thews, Kurg is a barbarian from far away to one of the cardinal directions."

"Then we have Nadilla, from one of the great desert kingdoms. She's one of our wizards."

The young sorceress moved with meticulous grace as she extended a hand in friendship. From underneath a mass of tight curls, kohl-rimmed eyes regarded Délia intensely, almost at odds with the sorceress' broad, welcoming smile.

"Next to her we have our other wizard, Zarain the Mysterious, who learnt the Art in the fabled Halls of Namash-Gur."

The small man had nervous eyes and skin like dry parchment. His silken robes were embroidered with mystical sigils, whose pattern spread upwards onto his tall, cylindrical hat, and was reflected even in the carved lapis beads he wore in his beard. The wizard made a deep bow, and muttered some words Délia couldn't understand.

Grûm was a more svelte dwarf than Délia had ever seen, and seemed a bit prissy for one of the Tenders of the Divine Forge. But he had a way about him that just made her instantly like him.

"Next to him we have little Lisette. I can't say what brought her all the way out here away from the big city, but she's one of the best th-- er, stealth specialists I've ever met."

"Hi," said the girl of doubtful parentage, sizing up the new arrival.

"And finally we have Melek, a priest from the fabled City of Gold."

The black-skinned man was clad in armour fashioned from the hide of a crocodile, and carried an ornate bronze mace. He stood and made a sign of blessing, and bade Délia welcome.

Email ThisBlogThis!Share to TwitterShare to FacebookShare to Pinterest
Labels: Épées & sorcellerie, let me tell you about my character