I seem to be bouncing from game to game lately, and starting new ones without continuing current campaigns. I hope to have something turned from raw notes into a polished, postable entry soon, but in the interim here's a summary of what I've been up to... 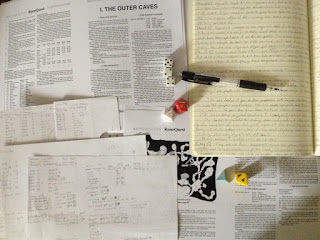 Wanting to play some old (2nd ed.) Runequest, I went and bought the PDF of Snake Pipe Hollow off Drivethru. I don't like playing modules from the screen, so I printed it out, half-sized to save paper and also see more text all at once. It's also convenient to mark off hit points from the enemies and treasures looted right on the page. Since I didn't need a computer for the module, I went completely analog and took all the session notes on paper too, which is always freeing, but doesn't help with posting later. 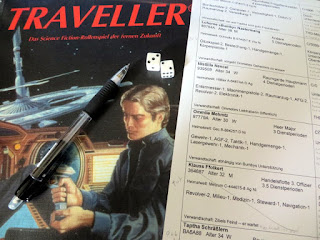 Sometimes it's fun to just roll up a bunch of classic Traveller characters using just the basic character generation rules (little black books, Traveller book, etc.) and send them off into a random subsector to seek their fortunes. I'd also been wanting to try out Zozer's new Solo rules for Traveller Cepheus Engine. And I found an inexpensive copy of the original German rulebook to play with.

I also seem to have re-started my solitaire Call of Cthulhu LARP... 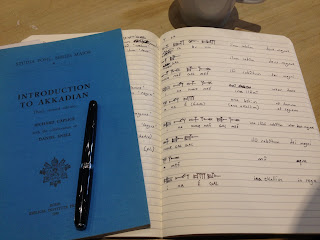