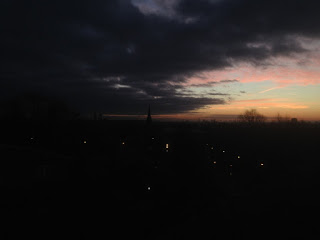 After a night of phantasmagorically terrifying dreams, Leslie calls the others to let them know he's cracked the code, and suggests they convene at Eleanor's for lunch. She suggests they meet at a pub instead; her housekeeper has the day off and she doesn't want to get left with the washing up. Bettina suggests the 'Spoons in Causton as she's a bit skint. Eleanor offers to pick up the tab somewhere nicer as a show of esprit de corps -- falling afoul of a conspiracy of murder and silence is one thing, being seen at a chain pub is quite another!

Leslie hides the original diary in his loft before setting out.

They read through Leslie's transliteration of the diary in turns, then decide which bit of information within provides the best clue to follow up. The name James Haverdon appears quite often; [1d4=] Bettina has met him before in a professional capacity, and thinks he will probably make a good ally, or at least willing source of information.

"He hired me once," she explains, "to dig up dirt on his brother -- the black sheep of the Haverdon clan -- that would prevent his returning to England, so he couldn't claim the inheritance. It looks like Gerald Frazer was in contact with Haverdon's sister, Georgina. I'm sure James Haverdon is on our side -- call it instinct -- but I can't just turn up on his doorstep asking about his sister's connection to a dead man. He'd think I was trying to blackmail him..."

"Leave that to me," says Eleanor. "The WI is always raising funds for some worthy cause or other. I'm sure I can get us an appointment with the Baronet."

Other die rolls for the above--

Actor: Baronet C.K. James Haverdon
d6=male
Age: Aged or mature in their position
Profession: Businessman, clerk, banker, or other white-collar job
Memorable Quirks: Remarkably well-prepared for whatever situation they find
Social Standing: A solid and reliable community member
Relation to Situation: A reluctant participant induced by threat or profit
Their Advantage in the Situation: A network of relatives useful in dealing with the problem

Q: Why does Bettina think the Actor can help? conceal / friendship : diary hints at Frazer's illicit dealings with family member
Q: Can Eleanor think of a reason to ring up the baronet? 50/50 (4+): O5 C7 - Yes.]


Eleanor leads the group to the baronet's manse that evening, ostensibly to secure his support for a charity drive raising money to combat teenage delinquency in the county. The pretence hardly lasts until the butler shows them into Haverdon's sitting room, but he seems unperturbed by the deception, and strangely relieved when they begin to tell him their story.

"I would like to help you," says Haverdon, "but of course this may have some bearing on the good name of my family. We cannot afford another incident like the one with broth-- well, miss McAdams, I think you know the incident in question. And I've had enough of people coming begging at my door for strange favours of late."

Conflict scene: The thugs of the Enemy seek out the heroes to intimidate or thrash them into breaking off their investigations. The intended violence is unlikely to be lethal unless the Enemy is confident they can get away with it without stirring up yet more trouble.


It made the most sense to me to invert this, so the PCs are the thugs here.

I rolled a Cult Tag: Massive Ritual
Scheme (from the Tag options): Create a large-scale "celebration" that triggers the magic]

"It's the Yule Festival planning committee," says Haverdon. "They've been absolutely hounding me of late. Do you know them?"

"I know of them," says Eleanor. "They approached the WI, but we voted not to be a part of it all. The old guard were concerned by the pagan trappings of their celebration. The same ones kicked up a fuss when Mags Fortescue said we should have a Halloween costume night for the kiddies. I just thought it was too American!"

"This is different. Not at all just a bit of harmless fun. They keep saying I must allow the celebrations to take place on my lands. They want me to clear out some of the woods and have a giant bonfire there, that it must take place in that very spot. I'm not a superstitious man, but I tell you, there is something incontrovertibly sinister going on."


Haverdon has provided the party with a list of names. That night, Bettina sneaks up to the house of the Yule Fire committee chair[d6=]woman, and punctures the tyres of her car. She then posts a note through her door: 'WE CAN GET TO YOU'.

Leslie hides the transcriptions in his office safe, but the real diary is still in his house. That night, the demon manifests again, but doesn't reach his bedroom before dissolving back to its own hellish dimension. Leslie's dreams are no less troubled than the night before.

The next morning, disturbed by his dreams and another, even more horrible foreboding, Leslie decides to hide diary in his own chimney, just like Gerald had done. He spends the rest of the day in bed [healing 1hp for sleep, +2hp for bed rest].

Eleanor goes into Causton for some shopping. She calls the chairwoman from one of the few remaining phone boxes in England, and asks if the note was received.

"Yes, I got your message. I have reported it to the police."

"You don't want them involved. We know too much about you. Cancel Yule or else."

Eleanor's threat is greeted with laughter, and a definitive click. But late that night, Eleanor decides it is she who will have the last word. She slinks up to the chairwoman's house, and is pleased to see four brand new tyres on the car. These she leaves well alone, intent as she is on cutting the car's brake lines.

Also that night: the demon appears for 2 rounds, but once again fails to reach Leslie. His nightmares yield 1d6=4 madness.

Eleanor calls again from Causton, and repeats her threats.

"I will tell the others we must cancel it," says the chairwoman.

"I suggest you also leave the village."

The next day, Eleanor leads the group back to visit Haverdon. She is at first still chuffed with her success in frightening off the Yule Fire committee chairwoman, but by the time the tea is brought into the baronet's study, the feeling has waned.

"We've got them to back down," says Eleanor once the servants have left the study, "but it isn't finished yet, is it?"

"No," sighs Haverdon. "They'll just try some other way."

"How can we stop them?

"She's the public face, not the true leader."

"Her name wasn't even in the diary," offers Bettina. "But it does keep mentioning a meeting between 'the leader' and someone known as 'La Belle Dame'."

Haverdon laughs. "That's a very old nickname; I'm surprised Frazer even knew it. It refers to Janice Messing -- professor emerita, St John's college. We did English at Cambridge together. Oh, it seems an age ago! You see, she was obsessed with Keats..."

[The adventure was in danger of wandering all over the place, so I made the decision that Haverdon's information would lead to the final Investigation Scene.


The clue is in a Place in possession of an Actor who has a reason not to admit their possession of it, perhaps due to threats by an Enemy, rivalry with a Friend, or their own actions in obtaining it.


Actor: Professor Janice Messing
Age: Aged or mature in their position.
Profession: Teacher, professor, or other education worker.
Memorable Quirks: Always forgetting things or fumbling simple matters
Social Standing: A solid and reliable community member
Relation to Situation: The person responsible for hiding it or investigating it
Their Advantage in the Situation: Knowledge of a secret useful to them in opposing the PCs


Janice Messing looks suspiciously at the strangers on the doorstep of her semi-detached. "Who did you say you were with again?"

"The WI," says Eleanor. "We've roped our partners into helping, as you can see."

"Fine. I'd hoped to do this in private, but you leave me no choice. We're actually investigating the death of Gerald Frazer... and related matters. The trail has led us here. I Think you'd rather talk to us than to the police."

"Who sent you? Not that ridiculous old fool, Haverdon? It is I who shall be calling the police if you don't leave this very instant." [UNE: prejudiced - discrimination - contacts]

Leslie pushes through the half-open door and into her house.

"What are you doing?!" shrieks the professor.

"Quiet!" says Leslie. "We came here for answers and you're going to provide them... or else."

Eleanor spends an Expertise point to activate her Folie à deux class ability, allowing an automatic success on her Persuade skill to intimidate. If the target is under supernatural influence, she gets a Mental saving throw to avoid the effect. To preserve suspense, I decided to roll the save first,  using the UNE chart to determine her power level relative to the PCs if needed, and only ask the Oracle about supernatural influence if the save is a (probable success). But I rolled 1d20=1! There's no way that could succeed.]

Eleanor lays the course of their investigations out plainly before the professor, who nods knowingly but says nothing.

"I've fired a warning shot across the cult's bow," concludes Eleanor, "and now the kid gloves are off. You don't want to find yourself on the wrong side of this equation, or you'll find I can do much more injury to an old English teacher than just stringing together mixed metaphors."

"I don't want anything to do with them anymore," says the professor. "They're a bad lot, and up to something nefarious. If you want my help, I will give it, on the condition that you never return here again." [UNE: scheming - plot - current scene]

"Good. The cult leader is a [d6=]woman called Xanthippe Deniston. She lives at Dovecoate Manor, near Midsomer Mallow. There's a back way into the house -- I'd come in through the woods, not the road. You needn't worry about any guard dogs; no animals can stand being so close to the corruption. But there may be.... other sorts of guardians."

"Can you offer us any advice?"

"Only that they may be on to you. She sent round some of her lackeys just yesterday, asking if any meddlesome persons had been to see me." [UNE: mysterious - shadows - previous scene]

Following their interview with Professor Messing, the investigators retire to the nearest pub to plan their next move over lunch and a quick pint (except for Eleanor, who naturally always has white wine). They decide they must follow up the lead this very night, so after lunch they will all rest up and  equip for another nocturnal mission.

Before leaving the pub, Eleanor must excuse herself to go powder her nose. The pub's smoking area is right outside the ladies', and as luck would have it [the Event above], one of the cultists is in this very pub. [1d6=]He has just stepped out to have a fag whilst he makes a call to one of his co-conspirators. Eleanor can hear every unguarded word through the open ventilation window.