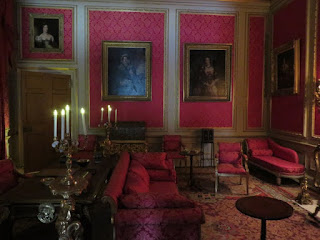 When Julia arrives on Molly Lasher's quiet little street in Chelsea, she immediately notes the police car parked outside. She waits a little while, and is soon rewarded with the sight of a fuming DI Mitchell emerging from the building.

"Detective inspector! How'd you get on? We should compare notes soon. Over dinner, perhaps?"

DI Mitchell composes himself, before answering, but Julia can't help think him pleased to see her. "So, you got Hillyard talking then, did you?" [UNE: knowing - examination - previous scene]

"Have I ever! How was Miss Lasher?" 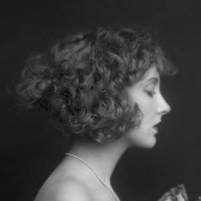 Miss Molly Lasher may be a thoroughly modern girl, yet her flat is anything but. The décor is perfectly tasteful, rather subdued even. Plenty of antique sculptures and classical portraits in oil adorn the spaces between her overfull bookcases.

Molly extends a delicate hand to greet her guest.

"Such a day for visitors!" sighs Molly. "Oh, I do hope you'll be less tedious than the last."

"I just saw a copper leaving your building, if that's what you mean," smiles Julia.

"How well did you know her? I can't say I'm surprised she came to a sudden end."

"No, I suppose she'd always liked to run that risk. She'd be tickled to know her death made the headlines!"

Molly laughs. "She would indeed. A toast then, to poor famous Alex. Oh, what a miserable hostess I am! I've not offered you a drink."

"Scotch would be heavenly. Rocks if there are some to hand, otherwise neat will do me just fine."

Molly ushers Julia into an overstuffed chair and pours a drink for them both.

"So, you're probably wondering why I called," says Julia. "In fact, it's because I was just to see Hilly yesterday, and your name came up."

"Indeed. He might have telephoned me and said as much." [knowing - history - last action]

"That's Hilly for you. If I'd known, I'd have asked for an introduction. But he seemed... reticent to speak of you. It seemed like he'd lost heart."

"And when he showed me the medallion... well I didn't know what to make of it at first. I mean, it doesn't really go with anything in my closet, you understand. But then last night logic set in. It just seemed all so... so exclusive! Show me a shiny thing, and I have to have it. And with poor Alex leaving us all so soon, I got to wondering. Might there be an opening in your little club?"

"In fact there just might! We've a do planned in Brighton at the weekend. Can you get away?"

"Can I! I can practically taste the rock already."

"Good. I'm afraid there isn't time to get you a medallion done up before it's time to leave. Tell you what, I'm booked in at the Metropole. Leave me a message there, and I'll bring you as my guest."

"I'm looking forward to it! What's the dress code?"

"Understated, but fashionable, darling. Fashionable! Though I should tell you that, for the high point of the soirée, some fancy dress will be provided..."

"Heavens, no! That wouldn't do at all. We need to all look the same. You must understand, darling, we needed a way to give our little club some caché, some mystique. So I have devised a splendid entertainment, a participatory one at that. We're going to dress up and re-enact the Dionysian mysteries."

"εὐάν! But, forgive me if I may be so bold as to say that I can't see how we'll manage. Not accurately, that is."

"Oh, you know of the Mysteries."

"I know what little the ancients dared say about them. I read classics at uni, you see."

"Oh, dear. This is going to seem so very gauche, I'm afraid."

"Not at all. I like to celebrate the modern day Bacchanalia just as much as the next girl. Probably more. I think it sounds perfectly marvellous."

"Wonderful! Then you'll play along. To wit, we must chant the rites in unison, as the Priest and Priestess make the sacrifice to Dionysus. I wrote a little chant -- it sounds enough like Greek to me, though I suppose you'll find it perfect gibberish. Please don't laugh. I don't want to know how awful it is! I'll write you it out, and you must promise to learn it."

"There's a good girl. Oh, where are my manners? Your glass is empty!"

[N.B. I forgot to have her roll a Spot Hidden to see if she could notice anything unusual in Molly's flat before going on to the next scene. But she had such a pleasant chat that I think she forgot to even look.]

[Meanwhile, DI Mitchell has another cult member in the interview room, and they tell him something that brings up buried memories of the raid on that den of vice near the Limehouse docks when he was a rookie. It's so chilling he loses 1d8=8 SAN.

Julia rings the police station when she gets home, and in due course is connected to  DI Mitchell. [Psychology (40%) roll to detect his mood: d%=36, success]

"Miss Quigley-Ffoulkes, I think you'd ought to go back to Cardiff. These people -- you don't know what they're capable of!"

"Yes, I most certainly do! Remember, I got into Alex's flat to see the state of it."

"Of course. How could I forget. So, did Miss Lasher have anything useful to tell you?" [inquisitive - curiosity - last action]

"They're planning on re-enacting some pagan rite! I've got an invitation."

"Don't take that tone with me, Detective Inspector, for I most certainly can! And I shall. Now, how about some quid pro quo: what progress have you made?"

"It's not a game with them. This goes well beyond spiritualism or some sort of revival of the 'Old Ways'. This is a pernicious sort of devil worship and the people are dangerously  unhinged by it." [insane - chaos - enemies]

"Well, obviously, someone's taken it too far. But I hardly think this Bacchic Revel will be any more than a bit of fun in fancy dress. Too much liquor and powders and sins of the flesh to be sure, but nothing I haven't seen before. Besides, the only way I'm going to find out what's going on is if I'm right there in it. I'm sure there must be some suspicions within the group about who killed Alex, and let's face it: none of them will talk to the police. Now, I must needs pack tonight, and head to the library first thing tomorrow before I catch my train. Just in case there is some obvious clue to be gained from the proceedings, I want to know all there is to know about the 'ancient mysteries'."

Julia packs all her things that night and arranges room service for an early breakfast. She has dinner in her room and just the teensiest little nightcap (can't be more than 4 or 5 shots in the glass), for she has a busy day ahead!

But in the early hours of the morning she wakes with a start, and the feeling that she isn't alone. She switches on bedside lamp, and grabs her gun from her handbag. The shadows on the wall seem to move & contort, taking on shadowy human form and emerging from the wall all round her. Eldritch symbols have been carved into their necks, and when the phantoms open their mouths to speak, she can see their tongues have been cut out...

[The sight will cost 1/1D8 SAN. Julia's current Sanity is 62; d%=64, fails; 1D8=8 SAN lost.
Idea roll (65%): d%=47, success, so she comprehends the true awfulness of what she has seen and must roll on the Temporary Insanity table: d10=babbling incoherent speech for 1d10+4=9 combat rounds (about a minute).
For her first bout of insanity related to mythos sources, she receives +5% to her Cthulhu Mythos skill (so has 5% total skill).]

Julia tries to ask the approaching phantoms what they want, but cannot produce more than a torrent of inchoate glossolalia. The gruesome spectres touch her and disappear, or perhaps she just faints...

Setup: to the library

By morning, her rational self is once again in control and she does her best to laugh off the strange nightmare. Imagine! being so scared by a dream as to take one's handgun from one's purse! The mysteries of the subconscious, she decides, are best left to Mr. Freud. She has other Mysteries into which to delve this fine day.

The British Museum would be the logical place to start, had she a few days to devote to the project. But she does not. So off to the London Library it is. It has plenty of volumes on the intricacies of classical history, and it's only a 6-minute walk from the Ritz, besides. Such luck she's kept her membership all these years. And she hopes she doesn't have any overdue books still out from the last season she spent in Town...

Of course, her uni days were all spent in Cardiff, so most of her visits here were for the procurement of scandalous French novels. Undaunted, she dives into the card catalogue with an intoxicating sense of purpose. Soon Julia has found an armload of old volumes and an out-of-the way carrel in which to consult them.

First she turns her attention to the incantation that Molly Lasher wrote out for her. She's read it out loud dozens of times in her hotel room, and can barely get her tongue round some of the words. Her Greek is shockingly poor [25%], but she's convinced the incantation isn't Greek at all -- not even one of the rustic dialects.

So she dives into the books on the Mysteries, and whilst she learns a good deal on the subject, there's nothing shocking or even particularly titillating in the accounts. Even the account in Livy tells her no more than she already knew -- though the allegations of secret murders do arouse in her an uncomfortable dread.

In a strange and dusty tome, one De Daemonibus Gentium by a certain Gyraldus Lilliensis, Julia finds a strange reference to the ancient voces magicae containing the names of demons of various pagan peoples of an earlier age. This gives Julia the idea to look again critically at the incantation. It costs her most of the afternoon, but by comparing the monstrous words to the entries in Dr Inman's Ancient  Faiths Embodied in Ancient Names, she does light upon the name of some terrible entity. 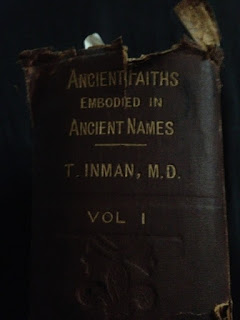 The old demon or spirit is said to be a threateningly macabre beast, which appears in the form of an abnormally glorious spider. Julia isn't sure what to make of this at all. She makes a cursory survey of religious history, to see if the thing ever had devotees in antiquity or the middle ages, but the hour is growing late. There is nothing more she can learn here today.

Counting the points:
The abnormally glorious spider might refer to a byakhee (+1), but seems even more likely to be a mi-go (+2); the dimensional shambler's total is now 6 less than the mi-go's, so it is removed from the list.

Email ThisBlogThis!Share to TwitterShare to FacebookShare to Pinterest
Labels: Call of Cthulhu, Experiments in Horror