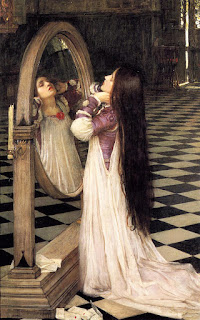 I'm about to be very busy again, and won't have the time to devote to writing up Lycinia's dungeon adventure for a couple weeks at least. But May is the Spring Has Sprung: Try something new! event (link - link) in the Solo RPG community, so rather than letting my blog lie fallow, I present the first part of a new campaign/game I started a while back but never got round to posting.

This game began as a conflation of vague ideas which I'd been ruminating over for years, but had never managed to realise in any workable way. I'd made a fair few false starts, none of which I mentioned on the blog, but it finally seemed to be coming together.

In fact, there were actually two separate campaigns I'd been trying to figure out, but having started one it seemed that combining them was actually the answer that had been eluding me. The first idea is just a non-Tolkien, non-D&D fantasy campaign: grim sword & sorcery leaning heavily towards the hallucinatory bandes-dessinées end of the spectrum, but without being too gonzo. The second idea was actually inspired by a painting, Waterhouse's Mariana in the South (see above), which gave me the idea of a lone PC held hostage in a fairy castle.

Other inspirations in no real order:

From a game perspective, I was looking for something different than my usual fare. I'd considered both OSR and BRP games, but neither of those avenues felt right. Essentially, I wanted something that could support a single PC (and occasionally a small party, since it always seems to come to that), had some built-in rules for social interactions, and would allow me to develop my idea of eventually running a dungeon adventure with little or no combat. So it seems almost ironic, given that last point, that I settled on playing Advanced Fighting Fantasy.

Now, time to set up the campaign.

Just kidding. I'll figure it out as I go. It might be set on Titan, it might not. I'll use all the baseline assumptions in the 2nd edition Advanced Fighting Fantasy (hereafter AFF) Deluxe rulebook, including the pantheon of Gods. If I need an area map I can whip up something with Hexographer in 20 minutes or so.

My vague setting ideas came first, but the character's wanderings though the world are going to be the lens by which everything about it is revealed, so this needs a little more thought. I had a vision in my head of a lone rider on a strange mount in a bizarrely coloured wasteland, so I decided to keep that thought in my head as I moved through the character generation process.

Indeed the first thing mentioned in the Character Creation chapter is character concept. I'll go through the rest of the steps in order, and try to summarise the rules as I go. I direct interested readers to the free Quickstart, which has  a good, if slightly simplified, overview complete with sample characters and an adventure.

There are 4 characteristics (attributes). All PCs possess SKILL, STAMINA, and LUCK. Magic-using and priestly characters possess a fourth characteristic, MAGIC.

Skill is used as the basis for all skill rolls and actions, Stamina is hit points, Luck has a variety of uses, such as finding clues, avoiding traps, and resisting magic, and Magic is a measure of arcane power and skill.

All PCs start with SKILL 4, STAMINA 8, and LUCK 8. There is a point-buy system used to increase these, but the most compact one of any game I've ever seen. You get 8 points, with 1:1 increase except Stamina where 1 point buys 2. There are maximum starting values which may not be exceeded, but these are lower than the maximums attainable through spending XP, so min-maxing isn't a problem. I wanted my PC to be skilled in both fighting and magic, so I spent my points for the following values:

Humans, elves, and dwarfs are allowed as PCs. I chose human, as befits a sword & sorcery protagonist. Each race grants a bonus to one characteristic; humans receive +1 LUCK.

Special skills are areas of expertise and training, and are broadly grouped into 5 categories: Combat, Movement, Stealth, Magical, and Knowledge. They increase the character's SKILL score for relevant activities, though Knowledge skills may be used with a character's MAGIC characteristic instead (so you can make a very scholarly but not very martial wizard). 1 point is basic familiarity, 2 is competent, and 4 is a master-level of training, but most mundane special skills can be used without points allocated to them.

Default special skills are granted by race. Humans get World Lore 1, City Lore 1 (or Forest Lore, Plains Lore, etc. based on origin), Religion Lore 1, and 1 point of any Movement or Stealth Special Skill. They also get 4 points in the Language/Common Speech special skill.

Based on the image of my PC, I took Desert Lore 1 in place of City Lore, and Ride 1 for the free Movement skill.

All PCs may then assign 2 points to each of three special skills, and 1 point to six more. No special skill may be chosen twice, but these points may applied to the racial skills.

This was the point where I had to choose my PC's magical tradition, of which there are 3 major types: wizard, sorcerer, and priest. Priests draw their power directly from their deity, wizards shape the mystical energies in the world around them, and sorcerers power their spells with their own life force. I was really drawn towards wizard -- as I usually am -- but in the end I went with sorcerer just to be different. I already have a game or three going about wizards searching for new spells, so a character with a fixed list (sorcerers get all the sorcery spells, but  do not learn more) will force me to do something different.

Each PC gets a single Talent, which is some sort of special ability. Elves and dwarfs also get a bonus Dark Seeing talent, which humans may not choose.

I went with Learned, which grants +2 to all Knowledge Special Skill tests, even if the character has no points in the special skill being used.

I envision my PC as having learnt the arts of sorcery and swordsmanship in some immense ancient temple in the midst of a vast and trackless waste, and having devoted many an hour to study of superannuated tomes and scrolls in its cavernous library.

A character's social class is rated from 0 (beggar, mercenary, criminal, i.e. most PCs) to 10 (king). Looking at the chart, I think that as a sorcerer my PC has a 4, equivalent to a clerk or witch.

She gets 3 cantrips (3x points in Magic - Minor). I chose Hear (lets you eavesdrop on anyone in your line of sight), Honesty (target admits one lie they have just told), and Weather Protection (does what it says on the tin).

Starting characters get a modest supply of equipment: 2d6 gold pieces, one weapon for which they have a special skill (and failing that, a simple club), a leather cuirass if they have the Armour special skill, a lantern & oil, a backpack, 2 PROVISIONS (meals; each heals 2 STAMINA if eaten), and one potion (that restores STAMINA, magic points, or LUCK).

I chose a sword and a Stamina potion. I managed to roll 12 for starting money, and spent 5 of it on a set of nose plugs, which is used for one of her sorcery spells. Unlike wizardry, many sorcery spells require material components.

The only thing missing was a name. I had a list of sword-&-sorcery-sounding names I had made during an earlier attempt at a game, so I just picked a nice one off that.

But I also wanted a character portrait. I had to find a fierce swordswoman in oriental(ist) clothes/surroundings, and neither over-armoured like a Jeanne d'Arc nor under-dressed like an Odalisque. So I did a Google search for "Judith + classical painting", and saved a selection. I think there may be some Salomés and a Medea thrown in for good measure, too. 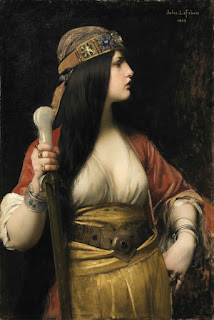 
So now the character was (rules-wise) ready to play, and I had a some idea of her background, but there were still a lot of gaps. What is she doing? Why was she travelling away from the solace of her temple? Upon what great Quest might she have embarked, and for whom? I think I can let that all come out as things develop during the game. If I ever make a big map, I can put a X on the far side of it for her eventual goal. It's probably the fairy castle, unless that is a random obstacle in her way, or only part of the story. Come to think of it, it's more likely that instead of a fairy king, the castle is the demesne of a vampire queen, or demon lord; this is sword and sorcery, after all.

She has enough personality and history that I have something to riff off of -- more in fact than some of my starting characters in other games -- and will avoid the pitfalls of my Magic World character who turned out less interesting than I'd hoped: sic tabula rasa, nec tamen rasior (thus a blank slate, but not too blank). But rather agonising over any more decisions about the campaign, I'm just going to play it out and see what happens.

next post: the adventure begins!
Posted by Alea iactanda est at 10:44

Email ThisBlogThis!Share to TwitterShare to FacebookShare to Pinterest
Labels: AFF, let me tell you about my character