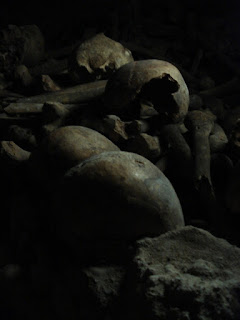 Back in the long corridor, Lycinia continues on until her torchlight reveals its abrupt end in a floor-to-ceiling pile of rubble mixed with old bones [Area 17. - dead end + wandering monster]. She isn't sure if she is looking at the remains of some monster's dinner, the remains of an excavation accident, or old graves falling in from above, so she resolves to try looking out for fractures or structural weaknesses as she continues her exploration, lest her bones be added to such a pile. She turns about to retrace her steps to the door she'd passed by near the blade trap.

[The monster is not so much wandering as hiding, using its Chameleon power. Lycinia needed to make a difficult Spot Hidden (69/2=35%): 34, success. But this was being pitted against the monster's easy Hide (50x2=100%) roll: 53, success. Since both were normal successes, the higher roll wins. She is unaware of the monster until it strikes.

Lycinia has hardly gone five feet before something heavy and wet thuds into the small of her back, knocking her forward a step [hit in the Abdomen for 1D8+1D4=3 damage; 7 Armour Points absorbs it all]. She feels claws pull at her mail as she wheels about to face her assailant.

A writhing mass of fat tentacles fills half the corridor, all connected to an amorphous blob of mottled grey flesh, the colour of damp stone. It flumps forward to renew its assault on the fairy woman. Lycinia is sure she could easily outdistance this foul abomination [Mov 3 vs. her 11], but the strike from behind has kindled her wrath.

N.B. Tentacles are completely disabled at 0hp. No more than 4 points of damage to a tentacle come off the total hit points.

[Round 1]
Lycinia swings her sword at the unwholesome, grasping tentacles, but the creature shrinks from her blade with alarming rapidity, the tentacles retracting in an instant like the eyes of a slug. But at least it cannot hit back when it pulls away. [Her sword attack hit, but it rolled 07 for its Dodge (32%). Its 'claw' attacks both missed.]

[Round 2]
It contracts again, then lurches for the elf. One tentacle reaches right for her face. Her sword describes a perfect silvery arc, and the tentacle drops to the ground twitching and oozing. [It missed, she rolled a normal parry (no further effect). Her attack was a Special success vs. its failed dodge. Tentacle #7 takes 6 damage, destroying it; it takes only 4 damage to total hp: 12hp left.]

[Round 3]
The thing comes at her furiously. It is all she can do to keep the heavy grasping tentacles from smashing into her [she missed, but managed to parry both its attacks].

[Round 4]
But in the fury of its attack, it leaves an opening. Lycinia stabs right into the centre of the writhing mass, and feels a rubbery resistance beneath the keen point of her magical sword. The thing contorts and shivers in pain, but does not relent [she hit its nerve centre (head); 5 damage leaves it with 7hp (2hp left in the head location)].

Her bravura is not without cost. As she slips back out of reach, one of the tentacles scraps across her leg, shredding the stiff leather of her trews and pulling away bits of her white flesh with its myriad of tiny hooked claws. [5 damage -2AP; she takes 3 damage to the left leg dropping her to 5hp (3hp in the leg). Its second attack misses.]

[Rounds 5-6]
Lycinia has found the rhythm of her opponent. She steps in a second time, and once again is rewarded with the shuddering contortions of the beast as she strikes its midsection. This time she dances back from its grasp unscathed. It tries one last lunge at the elf, but loses another tentacle for its troubles. Then the fight goes out of it, and it slumps to the ground, pulsating weakly as its fluids drain into a greasy soup at the elf's feet.

Lycinia backs away, but it is evident that the creature is not feigning. She looks to her bloodied leg, binding her wounds with strips cut off her now-ragged tabard [Physik (23%) roll; d%=17, restores 1d3=3hp, back to 8hp]. The scrape smarts, but a little pressure soon stops the bleeding. 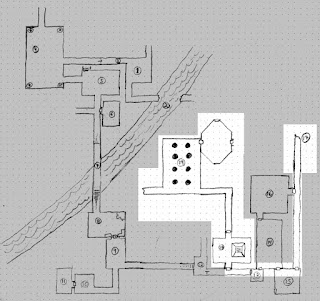 She continues back to the end of the long corridor, through the room with the chest in the magic circle [15], the long dusty room where she fought the energy beast [14], the tiny room before it [13] and into the corridor of the scything blade. She crouches low as she walks, though she is certain the blade trap did not extend very far into it, until she reaches the door. She pushes it open with rather less caution than she ought, and slips inside.

The door is recessed about 5' into the wall of the rectangular room [Room 18 - Skill Challenge only]. Another door is similarly recessed in the opposite wall. The room seems otherwise empty, save for a 10' square depression filling most of the eastern half.

Lycinia approaches the depression slowly, and her torchlight revels it to be a deep shaft. How deep, she cannot say, but it's farther than the torchlight can illumine. Her curiosity is great, and her torch has burnt down rather far, so she lights a new one and throws the old torch down the shaft. It falls for some hundred feet before landing in scummy water.

Lycinia is reminded of the time she nearly drowned in the flooded oubliette beneath the Foehrenfort ruins, and her curiosity suddenly evaporates.

[I rolled skill challenge only, but there would definitely be something interesting in the water if explored. However, our heroine is on a mission, so...]

She leaves by the door in the northern wall. It leads north for about 30', then turns to the west at a right angle. [because it's so much easier on graph paper, and after 30-something years of playing solo dungeons I still can't draw a credible bend. Hell, I can't even draw straight diagonal corridors that don't look wonky.  Anyways...]

The passage empties into a vast colonnaded chamber [Room 19. - Skill Challenge only]. The vaulted ceiling is some 45' above the floor, though the Doric columns do not actually support it, stopping several feet before it. Lycinia walks amongst the double row of columns, half marvelling at the strangeness of it all, half on the lookout for demons lurking in the shadows.

[I rolled Side Passage, but I'm treating the space as a Chamber.

Lycinia notices a glow coming from the capital of one of the columns. After a moment's hesitation, she removes her sword belt, backpack, tabard, and mail. The mail she heaps into a little mountain on the floor, and plants her torch into it upright so she needn't climb in near darkness. She briefly considers bucking on her sword, but thinks better of it. She swings a good length of the rope round the column to brace against, and taking her miséricorde in her teeth, begins the ascent. [Climb +10 for the rope (61%) succeeds]

At the top of the column, she finds the source of the glow: several lines of rune-like characters and magical figures are incised into the stone. Her eyes' glow nearly matches that of the inscription, as she gazes in wonderment at the sigils. She slides down the column and retrieves her pack, then ascends anew. She has just enough room to sit atop the column and copy the inscription onto a blank parchment scroll.

More than a little satisfied with her discovery, she slides down again, re-arms and armours herself, then proceeds out the chamber's only door. Immediately beyond is a large, roughly hexagonal chamber, empty save for bits of detritus. A plain door leads to the north, but Lycinia is scarcely aware of it, for another door is set in the eastern wall. Light flashes brilliantly from behind it, an unnatural luminescence that makes the elf's hair stand on end. She feels a wave of revulsion as she comes closer to it, and scents a subtle odour of decomposition. Lycinia is bathed in a cold sweat just standing before it, yet she is certain she must face what lies waiting for her on the other side. 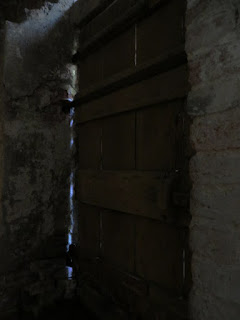 Next post: the secret is revealed
Posted by Alea iactanda est at 11:57