I've rolled up a fair few characters for BFJB, more than I can comfortably use in the same party for the first adventure (which I will write up soon, I promise!). It's good to have a stable of PCs, though, and fun to figure out their inter-relationships. Also, as this is a solo campaign, bitter intra-party conflicts will add spice to the adventure, rather than detracting from it as in group games.

But for the relationships to make sense, I should first introduce the characters. Two quick notes: 1) The first 4 PCs are the initial party for the first adventure. 2) City-state indicates where they were born, but all are currently resident in Babylon. 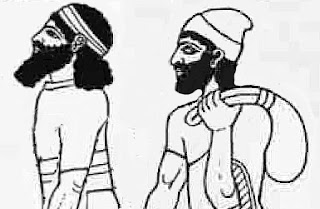 Mannum-kīma-Adad you've already met. Iqīš-Sîn is his long-suffering slave, who is tasked with accompanying his master everywhere and being always at his beck and call. He is envious of the other slaves in the household, who don't have to work nearly as hard. He inwardly curses the god that made him his master's favourite. They reside in Mannum-kīma-Adad's modest home in the Kullab district. 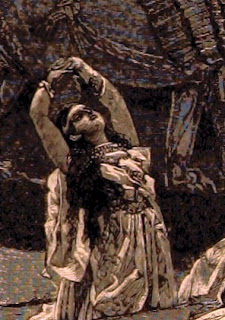 Damiqtum is a muḫḫūtum of Ištar-Annunitum. Originally from Mari, the goddess commanded her to go to Babylon, though did not reveal for what purpose. She now lives at the Ekitušgirzal temple in the New Town district, though wanders the city incessantly, waiting for a sign. 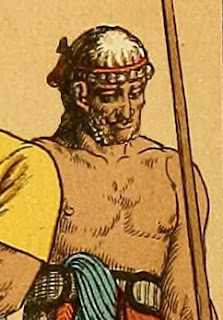 Šerašer is a sellsword from Susa. He fought for Zimri-Lim of Mari for a time, but eventually found more profit to be gained in the armies of Ḫammu-rapi. He is tired of army life, and is now considering what to do next as he spends the last of his booty. 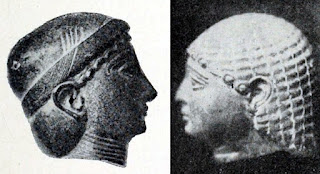 The twins come from an upper-class Babylonian family. They are identical, but their personalities are polar opposites. Annu-ḫaṣni is a severe and reserved woman who favours Sumerian modes of dress, where Annu-ḫani is a bonne vivante who likes lush fabrics and glittering jewels. As a nadītum of Marduk, Annu-ḫaṣni lives in the gagum (cloister) of Esagil, the primary temple of Marduk in Babylon. Her sister still lives in their family home nearby. Despite their differences, they've never quarrelled. 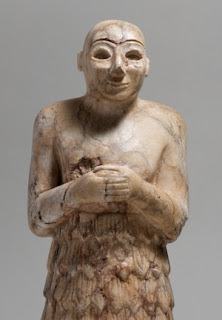 Nūr-libbi is an exorcist-priest who lives in the Eridu district, three doors down from the twins' family home. He is somewhat of an antiquary, and affects a Sumerian style of dress and (somewhat overblown) mode of living. His comical foppishness causes much laughter at his expense, but the truth is that it's is the only way he can cope with the horrors he's seen. 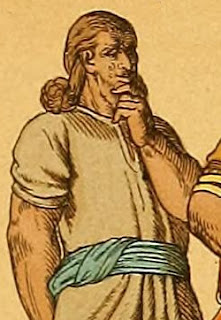 Wari-taldu's family are poor Ḫurrians who have lived in Babylon for generations. He is Nūr-libbi's personal barber, and lives at his home. He is loyal to the exorcist, but fears the toll that his work is taking on him. 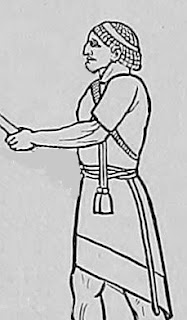 Laḫun-Dagan was a diviner in the army, but after a severe injury in battle had to retire from field service. He's now attached to the palace as a (very) minor functionary. Laḫun-Dagan is a no-nonsense sort of man. He still dresses in the rough tunics he wore on campaign and keeps his beard unfashionably short. The rest of the palace staff find him something of an embarrassment.

Since there were 9 of them, I decided to go for two character connections each. The first would be one pure choice -- some of them seemed to fall out naturally when I rolled them up. The second would be my usual method of rolling on the PC Relationship Table in Zozer's Solo. Some all of these (marked with an *) needed or suggested further developments, which will be explained at the end.

Mannum-kīma-Adad the tax collector
1. Iqīš-Sîn is his slave
2. Shares a secret past incident with Laḫun-Dagan*

Damiqtum the ecstatic
1. Laḫun-Dagan has had to verify her prophecies
2. Knows a dark secret about Mannum-kīma-Adad*

Nūr-libbi the exorcist
1. Wari-taldu is his barber / live-in employee
2. Hatred and constant arguing with Annu-ḫaṣni*


The big one is the secret past incident shared between Mannum-kīma-Adad and Laḫun-Dagan. It's certainly some horrendous crime; I'll decide which when it becomes important, probably by picking something off the Code of Ḫammu-rapi. This is definitely the dark secret that Damiqtum know about Mannum-kīma-Adad, but she is ignorant of the diviner's connection to it.

Iqīš-Sîn's friendship through guilt with Annu-ḫaṣni was a surprising result. I decided it meant that she always treats him like a person -- for which he is grateful -- but he finds her personally odious to be around. Sadly, he must see her all the time, as his master is charged with bringing her the dividends for many of her investments. Compounding matters is their mutual hatred, with poor Iqīš-Sîn caught in the middle.

Šerašer and Damiqtum were born in different city-states, so the 'lifelong friends' result needed some fudging. He's known her ever since he served in the king of Mari's army, and in fact taught her to speak Elamite (serendipitous dice roll: the language  was already on her character sheet, though where she learnt to read it is anyone's guess).

Annu-ḫani blames Nūr-libbi for a past event, the death of a favourite client, who was possessed by a demon of disease which the exorcist failed to cast out.

Wari-taldu is secretly jealous of Iqīš-Sîn (also surprising). He thinks Mannum-kīma-Adad is a much better master than the exorcist: he has elaborate hair, dresses better, and --most of all-- isn't surrounded by demons, ghosts, and disease.

Lastly, Laḫun-Dagan is one of Annu-ḫani clients. I actually rolled the connection between him and her sister, but shifted it to her since Annu-ḫaṣni is celibate (she could marry, but is forbidden by the temple from bearing children). And anyways, with this many PCs, at least one of them had to have this connection to Annu-ḫani.

Next post (soon! I swear!): the campaign begins
Posted by Alea iactanda est at 21:27