BFJB solo - Part 4: The thing in the darkness

I've been remiss in my posting (trying to adapt to new ways of living/working as dErra devours the land with his pestilence), so I'm including a short synopsis of the story and characters. If you've just been reading these straight through, you can skip down past the green text to the start of this instalment (Scene 8).

The story so far:

Mannum-kīma-Adad, a tax collector, received a visit from Damiqtum, an ecstatic prophetess, bearing a missive from the high priestess at one of Babylon's great temples of Ištar. The high priestess charged Mannum-kīma-Adad with collecting the grain owed the temple by a certain Warad-Amurrum, an Amorite who has a farming estate well outside the city.
To prepare for the perilous journey, Damiqtum led Mannum-kīma-Adad and his long-suffering slave, Iqīš-Sîn, outside the walls to a suburb of the great city to enlist the services of her friend Šerašer, an Elamite mercenary. And well they did, for not long after setting off into the countryside they were attacked by a band of marauding tribal Amorites.
They arrived at Warad-Amurrum's estate to find him absent, and were forced to deal with the overseer, Sumu-tibal. The overseer does his best to conceal the suspicious goings-on at the estate, but without much success.
That night, the howls of wild beasts reverberate through the countryside, and someone -- or some thing -- scratches at Mannum-kīma-Adad's door.

[from previous scene--
Q: Does anything else happen in the compound overnight? likely (3+): O3 C3 - Yes, but... nothing that can't be hidden by morning
+Event: Introduce a new NPC - Overindulge / Illusions]

"I hope our guests all slept well," says Sumu-tibal, dark circles under his eyes.

"In fact, I barely slept at all," says Mannum-kīma-Adad.

"Yes, as I told you, the lions were hunting all night. They make the most terrible racket!"

"Those were no lions," says Šerašer.

"Oh, of course. The sound was wolves, to be sure. The lions have got them all worked up. Between them both, we keep losing livestock. They took another few sheep last night..."

"That's bad enough, but inside the house!" interrupts Mannum-kīma-Adad. "There were slaves larking about by my door. You really had ought to keep them quiet if they're indoors."

"There were no slaves by your rooms, I can assure you."

"Well, someone was outside my door!"

"They... they must have slipped inside when I was resting. I'll have words with the scoundrels!"

The overseer leaves his guests to their breakfast of bread and goat cheese, and says he'll be back once he has disciplined the naughty slaves. They eat in a heavy silence. None of them slept well, and the heat of the day already feels oppressive. Would that they were on a mission for the temple of Šamaš! Then perhaps the blazing orb in the sky would provide comfort.

Sumu-tibal returns as the house-slaves are clearing the plates away. He apologises once again that the master isn't back yet, but offers to conduct his guests on a tour of the estate.

[Sumu-tibal is up to something. The PCs get Mind rolls to detect his fraud, but there is a -3 penalty as none of them are Farmers by Profession (and moreover they're all city types).


Sumu-tibal leads them on a carefully-plotted path past the fields. He has positioned what slaves yet remain on the outskirts of each field, hoping that the sight of them working in the margins will convince the tax-collector's party that there are others doing the same throughout. His ruse seems to work, and he tests  his guests further by making slight errors in his explanations to draw them out, but they readily accept his words as truth. Perhaps they're just too bored to care.

As Sumu-tibal is showing them a sheepfold, a slave runs up and jabbers something in Amorite (only Iqīš-Sîn speaks it, but there's nothing suspicious in the message). Sumu-tibal dismisses the man, then explains the master has returned. [this is the Event (Introduce a new NPC - Overindulge / Illusions) from the previous scene]

Inwardly thanking their tutelary deities for sparing them a protracted exegesis on sheep shearing, Mannum-kīma-Adad and his associates eagerly follow the overseer back to the courtyard of the main house, where a well-dressed man with a perfumed beard rises to greet them.

"Ah, my honoured guests. I am so sorry to have not been here to receive you. But I trust the good Sumu-tibal has made you comfortable, and shown you how hard we are working to collect the goddess' grain."

[The man needs to make a Soul check: 4+5=9, success. Not a bad liar. But the PCs get Avoid rolls, using their Mind attribute.

"Who is this person?" asks Mannum-kīma-Adad.

"Why, it's my master, Warad-Amurrum," says Sumu-tibal. "The lord of this estate."

"It most obviously isn't."

"I assure you," says the man, "my appearance is usually better than this. The road was long and dusty. I changed as quickly as I might so as not to keep you."

"Speak only when you're spoken to!" thunders Mannum-kīma-Adad. "I was addressing Sumu-tibal."

[Mannum-kīma-Adad is using his Authority professional talent. He makes a Soul attack, rolling 5(current Soul)+3, a success; The imposter's Avoid check comes up with a natural 1, fail.]

"You see?" says Mannum-kīma-Adad. "The lord of such a grand estate would not bow his head before me thus. What is the meaning of this imposture?"

"I... forgive me, I meant only to protect my master. Your grain will be forthcoming. We just need time."

"He's away at his other estate, and I don't know when he'll return. I'd hoped that you'd be satisfied if you thought you'd met him, and leave with his assurance. I am only trying to protect his interests."

"Why is this slave still before me?" asks Mannum-kīma-Adad. "Get you gone!"

The slave runs off.

"Now we shall speak alone. I wouldn't want to hurt your authority in front of the slaves. But I don't believe you at all. Perhaps I'll have my bodyguard beat the truth out of you."

Sumu-tibal tries to wrench himself free from the Elamite's powerful grip, but is held fast.

Damiqtum brandishes her dagger before the struggling overseer. "Maybe we should cut him open and read the truth on his liver, instead."

[She's using her Sharp Tongue talent to make a Soul attack: her Soul 6 + 5, success vs. Sumu-tibal's Soul 3+3, failed Avoid.; He takes Soul damage equal to the weapon's damage value (2), reducing his Soul to 1.]

"That won't be necessary," says Mannum-kīma-Adad, "provided he render up to me a full account of this pathetic deception. What is going on here? Where is your master? And where is the goddess' grain?"

Mannum-kīma-Adad is slightly dismayed to see the Elamite glance toward Damiqtum for her assent before he releases his grip on Sumu-tibal. 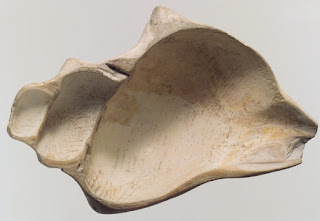 The overseer heads to the slaves' house and finds an old woman baking bread in the courtyard. "Run and fetch me an oil lamp he barks, [Soul check 1+4, fail] scarcely able to conceal the tremor of fear in his voice. The old woman scurries inside, and soon returns with an old, scuffed seashell lamp that probably belonged to the master before it was dropped and chipped. She lights the wick in the cooking fire and places it into the channel carved at one end, then hands it wordlessly to the overseer.

"Come. We're going out across the field."

They follow bemusedly through a field of barley. None of them pay particular heed to just how overgrown the barley is, nor the absolute lack of slaves in the field. [Mind checks (at -3) all failed]. 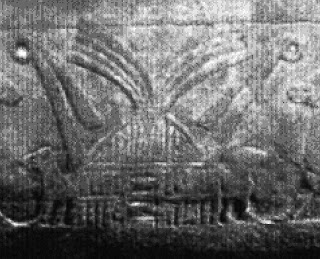 In the middle of the field stands a solitary reed hut. Sumu-tibal stops a full qanûm [~6m/20'] before it and offers the lamp to Šerašer. "You've probably got the steadiest hand," he says. Quizzical looks and silence meet his proclamation, so he adds, "I'm not going in there."

Mannum-kīma-Adad's disgusted sigh does not move the overseer in the slightest, so he beckons his companions to follow him, but stops short after few paces.

"It's worse within," offers Sumu-tibal. "And be careful with the door. Don't let too much light in , or... just please don't."

Šerašer leads the way. He holds open the door to find a thick hanging curtain just inside, which keeps the interior in perfect blackness. He goes in bravely. His three companions file in behind him, heedful of the overseer's unusual entreaty. The stench of foulness and decay is overwhelming inside the hut, causing them all to retch and their eyes to tear up. Their eyes slowly adjust to dim lamplight and they see the source of the uncleanness. A swollen, five-legged goat lies sprawled in the dirt against the far wall, rasping with each uneven breath. A fleshy leonine head grows on a shrivelled neck out of its flank.

[the horrid stench imposes a -2 penalty on all checks.

The PCs must each make a Soul check to avoid taking a point of soul damage from fright per the demon's Horrific Visage power: all fail their rolls (no crit fails though). Their Soul values are thus reduced to - D5 I1 M4 Š1

The lion head blinks with evident distaste as the flickering lamplight plays over it. It rises feebly on its spindly neck to gaze pointedly at the humans entering its sanctum, looking over each one in turn. The onlookers have no doubt that they are faced with an utukkum lemnum (evil demon) rather than a simple izbum (monstrous birth), even before the head begins to speak in perfect, though grating, Akkadian.

"So, Mannum-kīma-Adad, you have come at last. And with your three friends behind you -- not that I'd keep them there, were I you. I wonder which will be first to betray you..." [knowing - account - friends]

"Everyone knows who you are. Your name will be on the king's lips someday. But if you fail in your task, it will be angry words the king speak, will it not?"

"Don't listen to it," says Damiqtum.

"But why shouldn't you listen to me? I only wish to help." [scheming - compromise - previous scene]

"I--I-- I doubt that very much," stammers Mannum-kīma-Adad.

"Think you that I enjoy being held captive on this miserable farm? No! Set me free, banish me from this place, and the slaves can return to their fields, the grain can be harvested, and the ēntum-priestess of the temple shall thank you most eagerly. But time is short. Daily more and more slaves flee into the countryside. If you do not act quickly there will be too few left for the harvest. And then the consequences for you will be... you know I speak truly."

"Come, we've heard enough of this," says Damiqtum, and drags the trembling Mannum-kīma-Adad out of the hut. The others follow quickly behind. 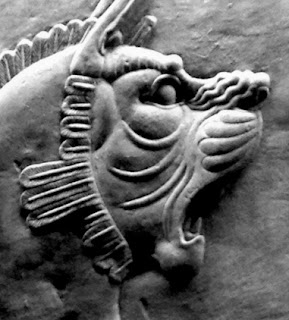 next post: just where is Warad-Amurrum?
Posted by Alea iactanda est at 17:49