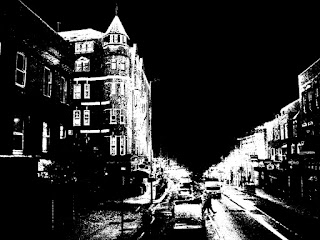 When Cat and Amit walk into the dark, dingy pub, Motörhead's Ace of Spades is blaring over the sound system. Cat has no doubt she'll hear it at last once more before they leave -- it's that kind of place. It's barely been open an hour, so there's only a handful of punters in place. Cat finds a seat and gives Amit a tenner to go to the bar. "I'd go with you," she says, "but I think I hooked up with one of the bartenders at a party. And I'll be buggered if I can remember her name."

Cat finds a place to sit, and blows out the candle stuck in the old Jack Daniels bottle (it's that kind of place) in hopes that the darkness hides her face a little.

Amit soon joins her. They've only been seated for about 4 songs when Cat's mobile rings.

Amit goes off to the back of the pub, and within seconds has been invited to play pool by some friendly metalheads.

To determine the substance of the meeting, I rolled a random Socialite challenge. 1d6: 1-3 want, 4-6 fear; 3
1d20=They want help, to advance in their profession.

I had a suspicion that he was going to be an important NPC, so I rolled him up as a 1st level Scholar character (with 1d20 Madness for his cult connections) 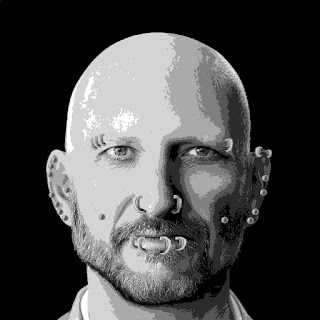 When Elgin walks in to the pub, Cat sees at once why he'd said not to meet anywhere too dressy. Even in old jeans and a t-shirt, the ornamented biker jacket and shiny patent cap scream leatherbear. He's got more facial piercings than all the bar girls combined, with studs and rings even peeking out from his four-day growth of scraggly beard. He goes right over to Cat's table and slides unceremoniously into the booth.

"Uh... ok... so there's a cave in the woods with... uh, something the cult needs your help to decipher. It has something to do with this."

Cat takes the artefact from her bag and places it on the table between them.

"Yeah. Um, there's been a few d-- people are getting murdered over this thing," says Cat as she puts the artefact away again.

"Right y'are, love. What're you having?"

"They're after you now," says Elgin as Cat is sitting down again. "They're not likely to give up. Nor to let you live, if you just try to bargain. But you'd probably figured that out by now." [UNE: knowing - discourse - antagonist]

"Maybe we can help each other. I have some friends that might appreciate what you have there. Provided we figure out what it does."

"The Circle's not the only party interested in... such items."

"Show me to the cave, and we can see what can be learnt. Then we can approach my friends with a better bargaining chip -- they'd love to ger one over on the Circle."

[Note on ethnic origins: I used London census data to make a 1d10000 (in Excel, to save my sanity) background table. I don't remember what I originally rolled for Elgin, since it got deleted when I saw the typo above ('ger one over') and suddenly I heard all his lines in a thick Yorkshire accent (non-UK folks, think Sean Bean). BUT, one of my pet peeves in literature is long passages written with every word in "dialect" ("Ow, eez ye-ooa san, is e? Wal, fewd dan y' de-ooty bawmz a mather should, eed now bettern to spawl a pore gel's flahrzn than ran awy atbaht pyin."), so apart from syntax and vocabulary choices, you'll mostly have to supply the accent yourself.] 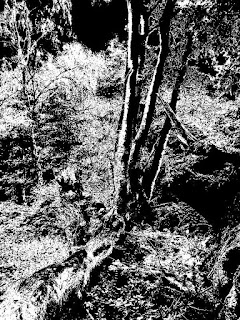 The next morning, Cat, Amit, and Elgin convene on the platform at Mile End to take the tube back out to Epping Forest.

Luckily they remember the route they took to find the clearing, and before long are standing at the mouth of the mysterious cave. Cat pauses to retrieve the revolver from her bag. Elgin's eyes go wide at the sight of the gun.

"What?" says Cat. "The cult aren't fucking around. Neither am I."

Amit switches on his torch and they follow him into the cave. In the passage they stumble across the contorted corpse of the cultist they'd left there previously. Her face is frozen in an attitude of anguish, and her blackened tongue protrudes between swollen lips. [the cave's atmosphere is slightly poisonous: 1d4 damage per hour of exposure, Physical save for half.]

When they arrive at the chamber, the weird stone is nowhere to be seen.

"They buried it?" asks Elgin.

"There's two kinds of people in this world," says Cat, "those with guns, and those who dig."

"One of us needs to stand guard. I mean, we can take turns; I'm not a total arsehole."

Digging with a cricket bat is sub-optimal, but fortunately the stone had not been buried very deep. They heft it up onto the ground, and Elgin plops down beside it to examine the carvings.

[He only need to roll 6+ Int/Occult,  since the cult did expect him to be able to understand it: 2d6+1=8, success.
But at first glance, he can only comprehend 1d6=5 symbols. I rolled them using the Mythic and Location Crafter word tables (but changing adverbs to adjectives)]

They get only fifty feet down the passage when Amit starts to feel strange. A dizziness overcomes him, and he passes out. 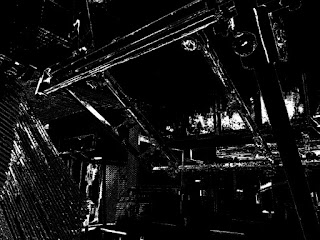 He dreams that he is in the centre of an immense whirring, clacking, crashing, wailing machine. All about him are cogs and levers and pistons and springs and he must run between them as they scream and vibrate and clash and with the barest mis-step they will shred him to gory tatters.

After an instant or an eternity of terror he finds himself in the dirt, being slapped awake.

"Or the cult already would have, I guess," says Elgin.

"Can you copy it all down?" asks Cat. "Maybe take pictures."

Amit sits against the cave wall, eating the jammie dodgers he'd brought as a restorative, whilst Cat photographs the stone sphere with her mobile and Elgin copies the inscription into his notebook. Then they roll it back and re-bury it in hopes the Circle won't know they've been back.

By they time they leave, they're all feeling more than unusually tired, with headaches and low-grade nausea on top of general fatigue. They get on the tube and all head back to their respective homes.

1d12=The Enemy’s minions attack at night, seeking to murder the PCs in their beds. Locked doors and other precautionary measures will give the PCs a little time to react.

So, this scene is just Cat, then.] 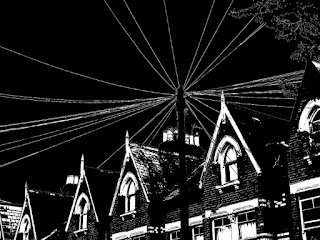 Back at the halfway house, Cat has an early tea (it's just gone 4pm when she finishes) and then marches up the steps to her room. She wedges the doorjamb under door so it can't open (her usual habit here) and puts the revolver on her bedside table (she'd tried it under the pillow once, and was too paranoid about it going off to fall asleep). She collapses on top of the bedclothes and passes out immediately.

Their plan is Abnormally / Lethal - kill anyone they encounter

About 3am, a trio of cultists in black tracksuits and balaclavas converge on the halfway house. They force the front door open with a crowbar and rush inside, where they proceed to go from room to room, killing anyone they encounter with their long, sharp knives. After they burst into the third bedroom they are discovered. Screams and shouts echo through the house as the residents attempt to flee. Several are cut down in their flight, but those who escape into the street are not pursued; their cries will be slow to wake the jaded neighbourhood.

Cat jolts awake when she hears the commotion, and knows they're coming for her. She cocks the revolver, aims it at the door. Soon enough the assassins are trying the doorknob, throwing themselves bodily against the door to break it down. Cat fires blindly through the door.

The report of the gun in her cramped room feels like it has just shattered her eardrums, but through the ringing Cat hears the pounding suddenly cease, and then feet scurrying away down the stairs.

She cocks the gun again, kicks the doorjamb out and carefully opens the door to see what she's done. A man is slumped on the floor with a hole blown through his chest, a bloodied survival knife beside him.

She hasn't time to process the deed. Fear and adrenaline combine to give her acute clarity of purpose. Cat throws a few things in her bag with the gun and artefact, runs out of the house, and picks a random direction to walk.

A voice behind her calls her name. She whips about to see Marvin, another resident form the house, failing to light a fag with trembling hands.

"Fuck me! I thought I heard a gunshot"

"I did too. I'm getting well away from that shithole. Maybe for good!"

Cat keeps walking until she's far away, and not entirely sure of where she is anymore. Weariness threatens to overcome her, and she sits for a moment at a bus stop. When a night bus pulls up a minute later, she gets on it and just rides to the end. 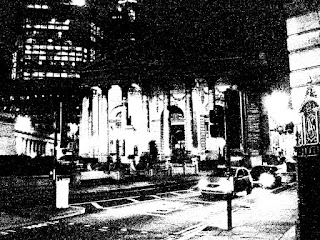 next post: getting somewhere?
Posted by Alea iactanda est at 20:19