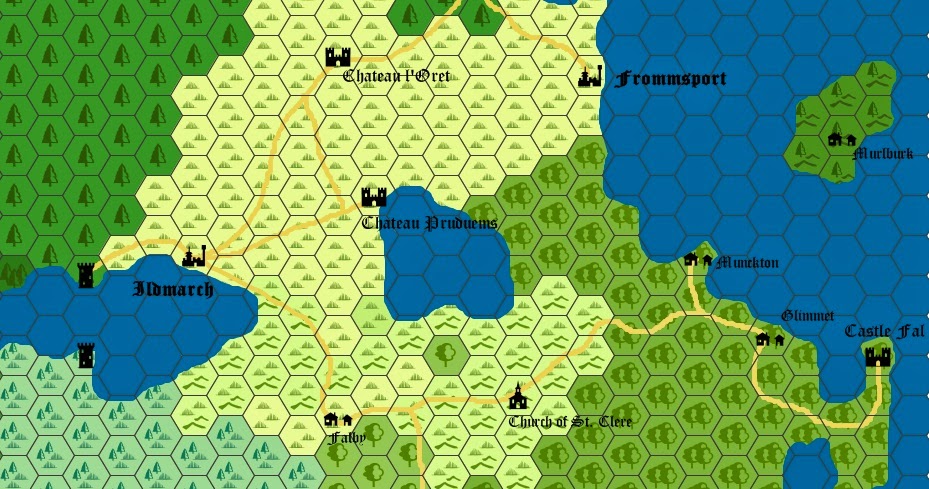 
It's a quick journey by road to Chateau l'Oret. As they are nearing the castle, the party encounter a pair of diplomats travelling home with their six bodyguards. They are initially a bit stand-offish [reaction=7], but willing to exchange a few words.

"So," says the diplomat, who has the look of someone more inclined to feasting and finery than actual diplomacy, "you are making for Chateau l'Oret. You may find it a dismal locale. Oh, the Baron Forzdeleu is a nice enough sort, but my esteemed collegue and I have just had the unpleasant duty of informing him that the city of Ildmarch prefers to remain neutral in the conflicts between the nobles of the kingdom, and will therefore not be able to send him any soldiers nor supply his army at anything other than market rates; which courtesy we of course must extend to all parties in the coming conflict, as befits our stance of neutrality. My advice, if you'll have it, is to forget the squabbles of this human kingdom and follow me and my companions back to the safety of good Ildmarch, greatest of the mercantile cities. Your elven gold will always be welcome in Ildmarch!"

The party humbly declines, and politely take their leave, though they do add in parting that they should one day very much like to see the wonders of Ildmarch, as tales of its magnificent workshops and clever artisans are told even as far away as fair Feyalldra.

The party proceed up the road across the wind-swept plain. They are met by the now-familiar sight of horsemen riding forth form the castle to greet them. [Q: Are the PCs well-received at the castle? 50/50: 04, Exceptional Yes.] They are relieved that the welcome this time is not only friendly, but upon announcing their quest they are immediately granted an audience with the baron (and healing magic from the castle's chaplain).

The castle's great hall has, at first glance, rather spartan furnishings. There are no decorative shields or suits of armour, no hunting trophies, no great and intricate tapestries, just a long table and modest benches alongside it. The baron's seat is a plain wooden bench, the same as for his guests. A single cloth standard hangs upon the far wall, embroidered with the Forzdeleu crest. Two great fireplaces flank the table on the side walls, a roaring fire within each. But there is no wood stacked beside, nor any within; the fires blaze upon the bare stone. A single chandelier hangs above the table, giving more light to the hall, though there are no candles. The table is formed of a single block of stone.

The Baron Iehan Forzdeleu rises to greet his guests. He is a well-built man of about 50, with a neatly-trimmed, somewhat greying beard and receding hairline. He wears fine clothing as befits his station, though almost no jewellery. On his right hand he wears the baronial signet ring, on his left a ring with a strange stone which seems to change colour every time one looks away from it.

Liveried servants bring forth an ample meal. The baron listens to a summary of the party's travels and quest with great interest. When they have told their tale, he begins:

"Well, those are quite the adventures! I appreciate your candour, even though," he says, looking at Miolla, who blushes sheepishly, "it may have been, at times, inadvertently more than the majority of you would have preferred to share. No matter -- I see that you all share noble intentions. And since our immediate circumstances intersect in more than one matter, I hope you feel the same about my own.

"I have heard tell of this fugitive you seek, this Neldir. He is said to pursue the blackest of black arts, and to possess a tome of unspeakable wickedness. He is now also -- for reasons that are entirely opaque to me -- allied with Count Rotres d'Estancbel of Chateau Pruduems, my worst enemy. The Count is possessed by greed: for wealth, for power, for admiration. His ambition seems limitless; I fear he may even have designs on the throne.

"My spies report that this Neldir is trying to uncover some sort of potent magical artifact to help advance the Count's plans, and that he is also after certain rare substances, like the vampire's blood you mentioned, for use in a ritual which will render the Count invulnerable or make his army undefeatable.

"The situation in this part of the kingdom is very tense. The Count has been raising an army, and one by one the other nobles are following suit out of fear. He has been sending out spies and emissaries to both attract supporters to his cause and aggravate the rivalries between those who oppose him. I've been forced to sent out emissaries of my own, though sadly the cities of Ildmarch and Frommsport have declared themselves neutral, and in the most self-serving terms imaginable!

"Whilst I struggle to keep the Count from amassing a great army, he is trying to cut off my avenues of support. I may be the only one he considers a real threat, as I have been the only one who dares oppose him openly, and I'm better liked at Court. Alas, I've been tired of court politics for some years now, and have been avoiding them. And this is where it has led.

"Further complicating things is the heretic de Molleré. I think he is trying for nothing less than a schism in the church of the Light God, with himself as the arch-priest. I don't pretend to know if he's motivated by piety or power, but I do know that his cause is attracting an alarming number of supporters. He and the Count have always had close ties. I've been informed that de Molleré's agents have asked the Count to send troops to aid him. The Count won't part with any soldiers -- not now -- but he has been recruiting in areas that are full of church loyalists to keep them from fighting against de Molleré's faction.

"Winter is soon upon us, so if there's to be a war, we have months to prepare. But if we can undermine his cause and get that black magician away from him, we may yet avert it."

Mythic questions which led to the above:

The baron wants to prevent the count from amassing an army.
The count wants to play for time whilst his army grows & keep the baron's allies away.