The road- and battle-weary party sleep very late. The sumptuous apartments provided for them by the Baron may be partly to blame. The elves find this the best human hospitality they've ever enjoyed. Aldira has never known the like.

By mid-day they are beginning to awaken. Debinvarr's stomach is rumbling, and he dresses in a hurry to go down to the great hall, where food and drink await him. He piles a plate high with bread and fruits and a little meat, and pours himself a goblet of fine wine.

Aldira comes in as he is happily stuffing his face. He smiles and says something to her, but she can't understand a word of it through his mouthful of food. "I thought elves were supposed to have better table manners," she says.

Théscine arrives in time to witness the exchange. "Many are the myths of our people," she says to Aldira.

Debinvarr washes down the food with a long drink of wine. Wiping his mouth on his sleeve, he turns back to Aldira. "What I was saying," he begins, "is that this is some really gr--"

Debinvarr stops short, clutches at his heart, then topples over onto the floor. Aldira rushes to his side, trying to slap him awake, feeling desperately for a pulse. Théscine starts screaming. 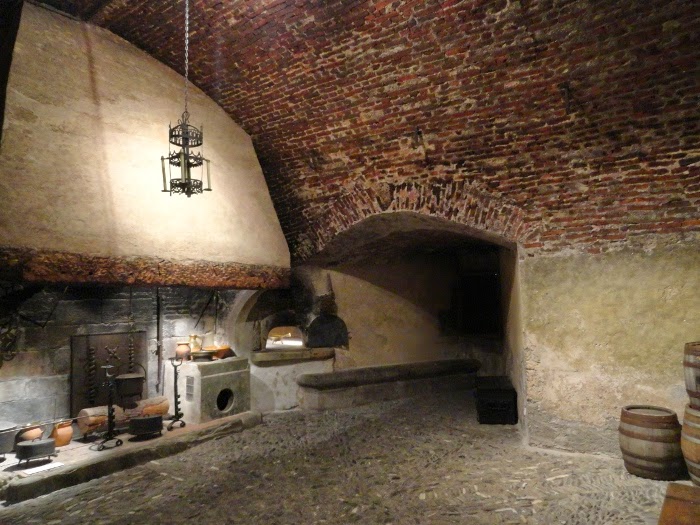 Setup: roll of 2 = modified scene (was: talk to spy to collect information on Neldir's movements to pick up his trail.)

The plan had been to confer with the baron in the morning (or thereabouts) and decide what to do next. One of the baron's spies had recently returned from a mission to Chateau Pruduems. Unfortunately the spy's mission had been a disaster, but the party hoped that the spy might have some useful information for them about Neldir.

Using spy rules for assassins in the Labyrinth Lord Advanced Edition Companion, I determined the fate of the mission. The spy is a 5th Level Specialist. The mission was moderately difficult, so it would take 4d10 days and have a success rate of 40%. I rolled 19 for the duration, and rolled 4d10 again to determine how long ago the mission started: 21 days, so it's finished now for better or worse. I rolled a 68 for the result, a failure. Rolling on the failure table resulted in "The spy is captured and tortured, revealing everything he knows about his mission and who hired him. The spy escapes."

He got back roughly 3 days before the party arrived. The baron's chaplain would have been able to heal his wounds, but his psyche is still damaged. Still he may have learnt something useful.

But instead of the interview over breakfast, the Interrupt scene (PC Negative - Debinvarr - Violate/Food) needed to play out. The obvious interpretation of this is that Debinvarr's food was poisoned. Since I already had the LL AEC open, I rolled a random ingested poison off the poison table: +2 save, 40% to detect, damage 40/20. There is of course no way that any of my PCs could survive that even if they did save, so I changed it to 2d20 damage, 1d20 on a successful saving throw. I'm not a fan of save-or-die poisons for PCs at any rate.

Did he detect it? The percentile dice come up 52; he drinks it right down. Does he save? I roll a 3, failure. He takes 14 damage. Having only 9 hit points means he dies in 2 rounds. I'll give him one more chance:

Q: Is there a 7th lvl cleric in the building with Neutralise Poison handy? Very Unlikely: 58, No.

The poison stops his heart as his friends look on helplessly.

I thought about it a minute, and decided it could just leave him in a coma, or else I could make it a magical poison that turned him to stone or cursed him with permanent gaseous form or the like. This would give the party another thread (find a cure for Debinvarr) and avoid the unfair and random PC death. But I didn't. Debinvarr never developed an actual personality; with him out of the way, a slot for a new, hopefully more interesting, adventurer opens up.

There isn't much the party can do, so with the aid of some of the baron's most loyal retainers, they bury their friend. He is interred under an elm in the castle's courtyard, along with his spellbook, the gold and silver rings from the treasure that he loved so much, and his sword.

The baron personally investigates the matter of the poisoning. One of the kitchen staff is implicated, but seems to have been magically compelled. He is banished from the castle as a precaution.

Miolla spends the rest of the day crying into her pillow, with Aldira sitting by to look after her. Théscine locks herself in her room and won't see anyone. Lycinia tears apart the servant's quarters and the kitchen looking for clues or maybe answers, but finds none.

The next morning the party finally meet with the spy. The interview is brief as his mission was a failure, and he is a broken man from his treatment at the hands of Neldir and the wicked count.

Q: Does the spy have any useful information? Very Unlikely: 29, Yes.
Q: Is it about vampires in the area? 50/50: 05, Exceptional Yes. (Neldir has been trying to obtain vampire blood; this is the only real clue the PCs have to go on).
Rolling 1d20 to determine which of the nearest 20 locations contains the vampires results in the Church of St. Clere. There won't be vampires there, but instead some vampire hunters: NPCs to fill out the party.

Their interview concluded, the party ride forth at once from Castle l'Oret. They promise to send word to the baron as soon as they have any news.