Lately I've been reading through Katabasis, Craulabesh's ancient fantastico-historical version of Tunnels and Trolls set in the Hellenised east ~50 years after the death of Alexander the Great. Time permitting, I'm going to test out the dungeon creation rules and run a party of hapless brave adventurers through some ruins in search of messy, painful death treasure and glory. But first I need some adventurers (or, Graverobbers, as he puts it).

I know there's been some interest in the rules, but that not everyone has enough German to get through them. For the curious, then, I present an account of creating my first character. 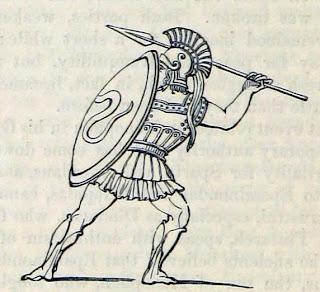 For my first Katabasis character, I have decided to make a Greek mercenary fighting for the Seleucids. The basic character concept is the picture above; let's see if I can manage it. The process then, taking the steps in order:

Name is first on the character sheet, but I always save it for last.

Stats are 3d6 (TARO), arrange as desired. The 6 classic Tunnels & Trolls 5th edition attributes are used, except that Intelligence is replaced by Education (Bildung), and Luck is replaced with Fate (Schicksal). I wasn't lucky enough to roll triples... So, to begin his adventuring career, we get:

Decent charisma means he's maybe an officer. According to 5th ed. T&T, with a 15 CHA he's "[a] good choice as a leader of small groups." So he'll be a δεκάδαρχος (dekadarkhos), a leader of 10 men. Military vocabulary is not my strong point, nor is the Hellenistic period generally, but the LSJ has this word being used from Xenophon to the Septuagint and all the way to Arrian, so I don't think it's anachronistic for Katabasis' time period, 270BC.

Talent: This section of the rules is a bit sparse. I'll pick one for now, πολύμητις (polumetis, "of many counsels": an epithet of Odysseus).

Next step is equipment. Costs are in Silver Drachmas. Encumbrance values are in Choinices (χοίνικες); this will be explained in the Encumbrance step. Coins are smaller than in Trollworld; 500 silver drachmae weigh one choinix.

He'll spend 28 drachmas on a Hellenised delver's pack (enc 3): a leather sack containing 3 doses of ψευδοσίλφιον (pseudosilphion: a healing herb), 3 torches, tinderbox, 1 Ration, a wineskin, 10m rope, and a change of clothing. He'll also buy a cheap faience amulet (3SD) of some Egyptian god or other as a good luck token, leaving him 7 drachmas in his purse.

Speed is determined by taking the lowest of STR, DEX, CON, adding 10, then subtracting total encumbrance. So his current speed is 11+10-8=13. Fatigue starts at 0 for everyone, but goes up with spellcasting damage, etc. The rules for Fatigue and Encumbrance remind me a bit of Runequest. This is a good thing.

So there's a whole character, basically ready to go. BBUT there's a bunch of background tables in the Namen & Herkunft (Names and origins) section at the back, so I'm going to play with those to flesh this dude out.

Because he lives in a city, he gets to roll d66+EDU for occupation. 61+10=Soldier. He also needs to determine if he is a citizen by rolling 2 dice. If both come up as 4+, he is a citizen: 2,3. So he's a μέτοικος (metic, a resident alien).  Rolling again on the polis table get 53: his family is originally from a mid-sized Greek polis (one not on the map). The internet has many more detailed maps so I'll pick something small at random: Λέβεδος (Lebedos) in Ionia. Quick background: his family moved to Athens as economic migrants when he was very young (Lebedos was always poor). As he didn't fancy a following in his father's footsteps as a sausage merchant (ἀλλαντοπώλης), the strong and well-liked youth ran off to become a mercenary soldier in the east.

There are some setting-specific rule changes, but it is essentially T&T, and once you know the differences characters take just a few minutes to make. Of course, I put in extra work to make him more than just generic Greek warrior #87 (like Makhomenos, the character I made to run through Labyrinth -- his name is a joke, being the present participle of 'to fight': 'Fighting Man', more-or-less). This is exactly why I only run/play historical games when I have time to devote to research. Though I can't help feeling I've gone overboard for a character who's probably going to get his face eaten off by shadow monsters on his first adventure. 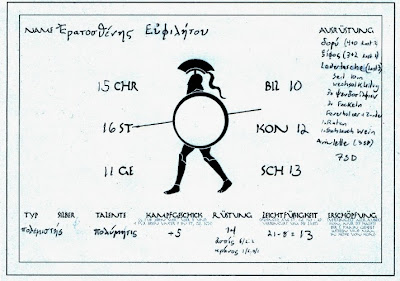 no one can ever read my character sheets...

Next Post: The other 5 characters in the party, but not in such exhaustive detail. But I need to find a book first...
Posted by Alea iactanda est at 20:29

Email ThisBlogThis!Share to TwitterShare to FacebookShare to Pinterest
Labels: let me tell you about my character, Tunnels & Trolls