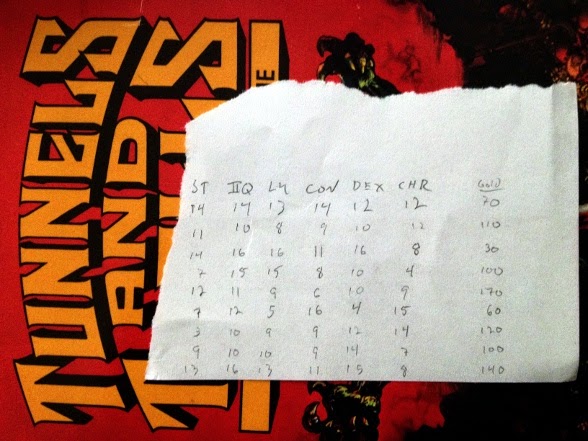 I'm quite a recent convert to T&T. Growing up I had heard the name, but never came across it in a shop. I'd never played it until a couple years ago when I stumbled across freedungeons.com. I played the solos I found online and in Trollzine, and was won over. I like the magic system (not so much the silly spell names), the elegant simplicity, the backwards-compatibility of successive editions, and the saving roll mechanic, which is one of the cleverest bits of game design ever (and so immensely suited for solitaire dungeons).

The first rulebook I ever bought was the 8e édition (being the French translation of 7.5).

But on blogs and in the fora I kept finding people who still swear by 5/5.5th edition, singing its praises and forsaking all others, as it were.

In a fit of ineffable RPG Sehnsucht I recently sought out a copy of the UK printing of T&T 5th edition, and determined to try 5th edition out as written in order to see why, 30 years on, it's still such a favourite. I decided to make a pile of characters, run each of them through a solo or two to get some experience, or at least money enough to buy better equipment, and then form a party from the survivors and run them through The Old Dwarf Mine (which had a 50% mortality rating for the group of huitième édition delvers I ran through it ages ago). I may even make a mini-campaign out of it; survivors of the mine expedition will reconvene to face Dargon's Dungeon and then eventually Overkill.

I rolled up the characters all at once on a piece of scratch paper, using straight 3d6 in order to determine their attributes. The very first character I rolled qualified for warrior-wizard (there's only a 1-in-360 chance of this). If that's what one can expect, it's no wonder people like 5th edition!
Posted by Alea iactanda est at 08:32