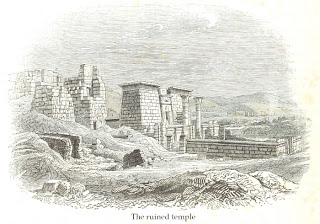 Lachaidiga and Wihiyaba walk half a mile over the dunes towards the ruins. When they are near, they peer over the top of a dune and watch patiently. The structure was evidently once a temple, though they cannot tell which god or gods it once honoured in its broken state. Nothing seems to move amongst the crumbling stones, so they move closer to get a better vantage point.

Nearer and nearer they creep, until they can discern the vague shapes of men and beasts carved on the walls, once gaily painted and gilded, now only known through long familiarity and guesswork. "There's Nuriu," says Wihiyaba, "and Ziburrun, and that one there, I think it's Yqoureh."

"Well, they are all gods welcomed by Anzakàr, so it's not a temple of chaos at any rate."

"But what could have happened to it? It can't be from... the time before. Can it?"

"You're the scholar. How old can it be, in your estimation?"

The pair lapse into silence for a while; news of a massing chaos army has brought fears of another world cataclysm to the fore. Still they detect no movement amidst the toppled stones. They decide to head into the ruin to explore.

"Look!" cries Lachaidiga, "So many skeletons littering the place. Wait-- stop a moment. I don't think we should go any further. The bones are all too perfect. Prey, scavengers, predators-- all arrayed as they fell, as if they rotted away undisturbed. Let's away from here." 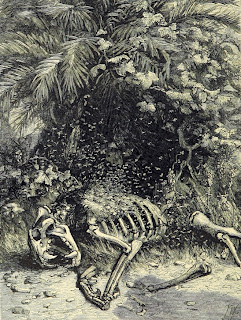 Wihiyaba is about to open his mouth to reply when a something begins to stir round the bones of a great cat. Like an angry swarm a spirit begins to swirl and coalesce into a diaphanous shape.

"Get out of here!" says Lachaidiga, "Warn the others. I'll hold it off."

Wihiyaba wastes no time, but turns to run. Lachaidiga sits down calmly in the sand, watching the spirit assume an ever more frightening visage. She reaches for the small stone about her neck and presses it over her heart as she was taught by the shaman, vaguely hoping it wasn't another of Qes' lies. The stone still pulses against her skin, but she can't quite tell if it is working or not.

The phantom flits towards her, covering dozens of paces in the blink of an eye. It surround her like a whirlwind. She feels as if dozens of tiny talons are clawing at her very being. She resists its pull, but it renews its attack. She feels her awareness being drawn into the spirit world, as the phantom tries to separate her soul and body altogether. Her eyelids go heavy. It would be so easy to just slip away, to fall asleep and walk the spirit realm in a dream. But no! she must fight back. She summons all her will, and pushes back. It becomes angry, unused to such might in a mortal creature. It comes back, ever more furious, a flurry of spectral nails and fangs. Not to be outdone, Lachaidiga shrieks like a banshee, lashing out with pure force of will. She knows not even if her mouth is screaming, or just her soul. But it is enough. Waves of energy crash through the spirit, seeming to shred and flay its very essence. It turns and flits back to the temple, to hide, vanquished, amongst the stones of the ruined pile.

Lachaidiga snaps instantly back to the world of the living as it departs. She lays back on the sand for a moment, exhausted from the struggle. But then she realises there may be more spirits lurking nearby, and without a moment's hesitation leaps to her feet and runs all the way back to the caravan. 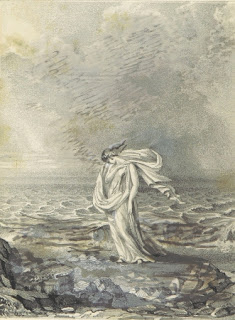 Spirit combat is a lot simpler than mêlée, but also a bit less interesting in the purely mecahanical sense.

Before the combat, Lachaidiga tried to activate her Spirit Shield matrix, so needed to make a Folk Magic (31%) roll. A 96 is a failure. She didn't bother to try again because she isn't certain that the item is even genuine. The attempt cost 1 Magic Point, so she has 16 going into the fight.

Back at the end of scene 3, I rolled up 3 death spirits, assuming that a battle with them was immanent. Scene 4's alteration made this a waste of time (I have learnt my lesson -- no more stats until the fight is unavoidable). When Mythic said the ruins were dangerous but uninhabited, I decided spirits would be a more interesting encounter than dodging falling rocks from structural collapse. Plus, it gave me an excuse to use that way cool picture.

Before the spirit can actually engage Lachaidiga in spirit combat, it must successfully pull her awareness into the spirit realm. This is accomplished with a resisted skill roll, its Discorporate (72%) vs. her Willpower (79%). The first attack costs it 1MP, with the cost increasing by 1 for each subsequent attempt.

Lachaidiga can't do anything this round, as she is not Discorporated, nor does she posses any shaman skills.


[round 2]
Once again the spirit makes a discorporation attempt, for 1AP and 3MP. This time the rolls are in its favour: 61 vs. 48.

The spirit pulls Lachaidiga into the spirit world, and the fight begins in earnest. It works rather like mêlée, though there are no special effects. The spirit uses its Spectral Combat (78%) skill, does 1d8 damage per successful attack (based on its skill; there is a chart), and MP are used as HP. Lachaidiga, lacking shaman skills, uses half her willpower (so, 40%) for her skill, which gives her a mere 1d4 damage rating.

It's out of Action Points, so Lachaidiga gets to attack it without resistance. A roll of 38 scores a hit for 1d4=4 damage; it now has but one Magic Point left.

For the second AP (both of them), she attacks and it defends. Some truly awful die rolls result in a miss against an equally poor attempt at defence.

Lachaidiga has one AP left, which she wastes with another crummy attack roll.

Lachaidiga again fails (roll of 67) at the unresisted attack, squandering her 3rd AP.

Her final, uncontested attack roll is a 31; this time she hits for 3MP damage; it is defeated.]
Posted by Alea iactanda est at 19:56