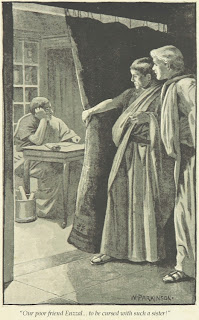 setup: 2=interrupt (was: continue next day)
Interrupt: Close a thread 1d3=3 no one else coming after her

[Meanwhile, back at the ranch in Anzakàr... Enzzal has given up trying to send anyone else after his sister and harassing the Sorcerous Colleges for information on her whereabouts. Alkinu returns to active duty, as dispatches from the frontier begin to come in, speaking of increased chaos-monster activity.] 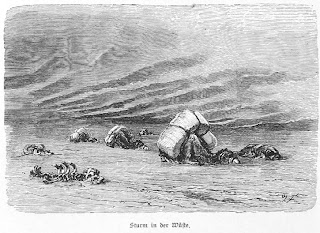 The next day Ni'arouj leads the caravan onwards. They make poor time, and so she elects to stop for the day at the campsite they would have reached the day before, had they not stopped by the ruins. The wind picks up the next morning, and soon a sandstorm is blowing across the desert.

The storm eventually lets up enough that the caravan can pitch their tents. The following day is a long, steady trudge to the next campsite, and the day after that another grim march, but in the late evening they finally reach their destination, the city of Peren'osh. 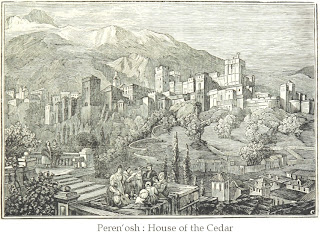 Peren'osh, 'House of the Cedar' (in a half-forgotten tongue), is a moderately-sized city nestled at the foot of low, cedar-forested mountains, from whence the wealth of the city derives. It is self-governing, but a client state of Anzakàr. Peren'osh's own small military is little more than a police force; Anzakàrite forts protect the logging concerns in the mountains (owned by the city's wealthiest families) and keep the surrounding area free from bandits and monsters. Anzakarite is the language spoken by the majority of the populace, and sages believe that the people fleeing the hosts of chaos from Peren'osh-of-the-time-before were the first humans welcomed into the safety of Anzakàr's bosom.

Ni'arouj has business to conduct in Peren'osh, but intends to be off again for Hasharu after six days. She will be staying at the caravanserai. She cares not where Lachaidiga and Wihiyaba stay, though she politely requests they send her word of their habitation, that she may contact them should there be need of their assistance.

Lachaidiga decides she would like to stay somewhere comfortable after all that time sleeping in a tent. She sets out into the city with Wihiyaba, and homes in on the most opulent inn in the merchant's quarter, or indeed in the whole of Peren'osh. Wihiyaba protests that it's far too rich for his meagre purse, but Lachaidiga won't hear it; she insists she has plenty of money for the both of them.

As curious as she may be to see a new city, for the next few days Lachaidiga hardly steps foot outside the inn, making only a daily pilgrimage to the baths at the end of the street. Wihiyaba is a bit shocked at the amount of money she seems willing to spend, but after the first day gives up altogether at trying to convince her to economise -- a word of whose very existence she seems scarcely aware.

[Finally, a chance to use the City Catch-up Tables in Cities. They are much more geared to standard D&D-type FRP worlds, so I may take some liberties. And some things, like the looking-for-work/employment steps don't apply to our independently-wealthy heroine, but I've been looking for a chance to try them out so...

Each cycle through the tables represents a week of time, so just one go for each of our heroes before the caravan continues on its merry way.

First, I need to check for random events. High INT or POW (WIS) allows a +5% or up to a -20% on the event roll. Wihiyaba is inclined to lay low, so with a -20% he gent No Event. A certain sorceress is much more prone to trouble, so rolling with a +5% modifier does result in an event.

Rolling on the event table produces "Your friend has offended someone". Characters who don't have friends in the city yet get to roll to see who the new friend is, but as I rolled Employer, I figured that it must be Ni'arouj. Another roll determined that she offended the guildmaster of the jewellers' guild. Rather than just going with the table results (bonus/penalty to getting arrested based on who you decide to help), I played out the scene.]

Lachaidiga leaves the baths late one evening, as is her wont, and is coming back to the inn, preoccupied with the weighty decision of which wine to sample with supper, when the concierge rushes up to present her with a letter. She breaks the wax seal and opens the wooden tablets to find the following lines therein: 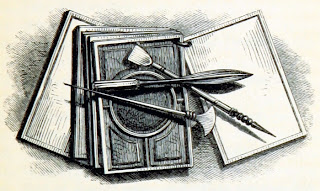 Ni'arouj to Sorceress
Problems with a guild
Come immediately

Lachaidiga arrives at the caravanserai to find a more-than-unusually agitated Ni'arouj puttering about, checking over the camels with a bewildered assistant.

"Well, well," she calls out the caravan mistress, "so herself has finally seen fit to grace us with her presence!"

"You're not the only one with important business in the city!" snaps Lachaidiga.

"Yes, I've heard. Making eyes at the bath attendants is work that must require great industry!"

"Hmpf! Do you require my services or not?"

Ni'arouj explains her disagreement with the jeweller's guild, and Lachaidiga promises to see if she can smooth things over. The next morning, Ni'arouj leads her to the guildmaster's personal shop. She consents to wait outside whilst Lachaidiga attempts to negotiate. Lachaidiga peeks into the shop to make sure there is a visible statue of Nuriu, the earth god, and upon finding it strides in with confidence. 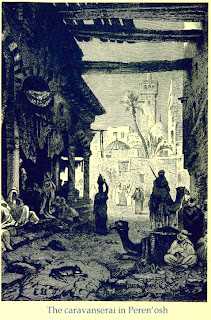 [I'll save the negotiation scenes for Star Trader, and just let the dice determine this.

As there was no clear winner, negotiations go into a second round. Her Influence (63%)vs. his Willpower to force an agreement.
Rolls of 83 (failure) vs. 13 (success) show the jeweller as the clear winner.]

Ni'arouj hasn't long to wait before Lachaidiga stomps out of the shop, flushed with rage. "Some people!" she exclaims, "I've never met anyone as absolutely pig-headed before. It was like talking to my brother!"

"Why didn't you use your magic?" asks Ni'arouj.

"Are you mad? Do you have any idea what sort of trouble that would cause? I'd be ejected from the college for such flagrant abuse of its teachings. What do you take me for?"

"As it stands now, fairly useless," responds the nomad, and so saying turns to walk away from the sorceress still standing there mute, with mouth gaping, fists balled, and tears beginning to cloud her vision.

When she returns to the inn, one of Ni'arouj's lieutenants is waiting for her in the common room. "The mistress wishes you to have this," says he, handing her an earthenware bottle "and says she hopes the unpleasantness will be forgotten."

Lachaidiga unstoppers it and sniffs the contents. "Istridzian date wine!" she says to herself. "If this isn't poisoned, she must be truly sorry!"

The rest of the time passes without incident, and there isn't anything of note on the Catch-up Tables except Cost of Living. Lachaidiga spends 80sp each for her and Wihiyaba on room and board (Living Level 6, the highest), and 300sp (again, level 6) for Companionship, which is a generic entertainment budget. Aside from a few silver a day for the public baths, I ruled that upon checking out of the inn, she is presented with the world's biggest bar tab. Fortunately, she brought a bag of silver and 7 gold coins (1gp=100sp) with her, in addition to her least favourite jewellery which she is planning to sell if things get desperate. She also bought a new travelling dress to replace the one that got ruined in the battle with the shaman.] 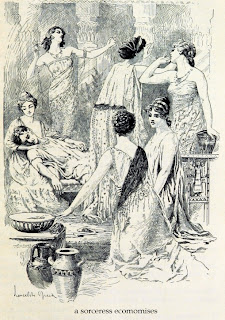 setup: back into the desert

The caravan sets out from Peren'osh, traversing more sandy dunes and rocky wastes. By mid-day Lachaidiga already feels the want of the comforts of her suite at the inn, but resolves to face the resumption of hardship courageously. Her efforts are nearly undone when she finds a (fortunately dead) scorpion whilst pitching her tent that evening, but Ni'arouj tells her they only have two more days before they reach Hasharu.

The following day is as uneventful as the first. There is some minor hesitation near the end, when they see shapes moving in the oasis, their destination. Ni'arouj peers at them for a few moments then orders the march to continue. 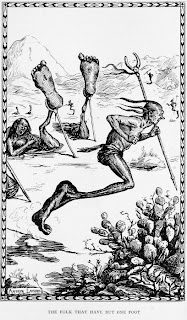 A tribe of skiapodes ended their own day's journey at the oasis. The strange and delightful creatures are known to many of the nomads, who converse with them in a pidgin language neither Lachaidiga nor Wihiyaba can understand in the slightest. The evening is passed in general merriment, and even though Lachaidiga can barely make herself understood, she enjoys their lively piping music and even joins one of them in an awkward, hopping dance.

[Ni'arouj talks to the tribal leader, and picks up a rumour
Location Data - small scale - specific location. (nearby ruins)
magnitude: minor annoyance (-1/-5%) : Ambush/Intrigues
Interpretation: the chief skiapous tells her that the ruins are occasionally used as stopover by bandits.]

The next morning, the skiapodes bid their friends the caravaneers good-bye, and the two march off in opposite directions through the desert. Before nightfall, almost before Lachaidiga even realises it, they arrive at Hasharu.

For her adventures with the caravan, Lachaidiga earns 4 (+1 bonus) Improvement rolls. Wihiyaba came halfway through all the significant encounters, so he gets 2+1. They're both going to sit on these for the time being (mostly because I don't want to have to update the PC page).]