LotFP Solo - Part the Thirty-Fifth: "Within that ruin, where a shattered portal / Looks to the eastern stars, abandoned now" 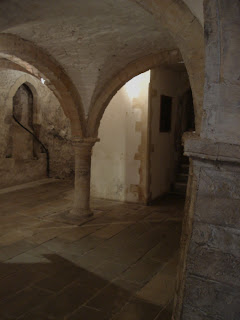 
The crypt seems to have been untouched since the church fell into ruin. It's full of the decaying remnants of an assortment of mundane furnishings: rotting wooden benches, tarnished brass candlesticks, mouldering hymnals, some rusting garden implements. But in one wall there is an old wooden door that seems to have escaped the ravages of time and the elements. It hangs slightly ajar; obviously the way the party seek is through here.

Beyond the door is a long, cramped hallway. Lycinia leads the party down it, single file. Her torch soon reveals a stout, iron-reinforced door at the end.

[Room contents: Trick/Trap: Illusionary wall concealing chamber with monster and treasure; N.B. Neldir had done his research and knew the secret to bypassing this chamber.]

As Lycinia is examining the door, a pair of burning skeletal hands reaches out from the wall of the passage, grabbing at Haddie's clothing. Suddenly the unfortunate girl is consumed in fire. The glass in her lantern shatters as she drops it. She screams once, and abruptly collapses, mewling in a charred heap on the ground. The walls of the passageway shimmer and fade, revealing a large chamber. Six more skeletons, all wreathed in flames like the first, are coming towards the party from both sides, clutching hands outstretched.

[The monsters are 7 Flame Skeletons. AC 14, HD 1. They attack as if their opponents are unarmoured. Their flaming touch does 2d4, save vs. Breath Weapon for half damage. Anyone hitting one in mêlée takes 1d3 damage unless they make a save vs. Paralysation. All other stats as normal Skeletons.

The PCs were (obviously) Surprised. Technically, everyone but Aldira and Miolla were attacked, but as none of the attacks rolled over 11, the misses were put down to being too far off.

Poor Haddie was hit for 7 damage. She failed her save vs. breath weapon, so the damage dropped her to -3hp, mortally wounded. She will die in (1d10=) 1 minute.

Initiative was then rolled; tied again. Everyone with Dexterity over (3d6=) 11 will act before the skeletons.]

[round 1]
Weapons are quickly brought to bear, but the flaming undead casually knock them aside. One of them gets inside Father Rochouart's swing, and leaves a burning hand print across the cleric's face [4 damage, failed save; he's down to 3hp].

Worland's axe strikes the first telling blow. The skeleton shatters and falls to pieces, the dark sorcery animating it being sundered. But Worland steps just an instant too late, and the gout of flame given off as it expires burns his hands [he did 5 damage; it only had 2hp. But he failed to save vs. Paralysation, and suffers 1 damage himself, leaving him at a solid 8hp].

The wild berserkergang takes hold of Lifstæn and Nidbiorg. They rush forward, axes swinging wildly insensible to the flames enveloping them as they press the attack. There is a shower of splintered bones as Lifstæn lops off an arm, whilst Nidbiorg smashes another into jagged fragments [he hits for 6 damage, leaving his opponent with 2hp; she hits for 7, a kill. Nidbiorg does suffer 2 fire damage though, she's now at 7hp].

[round 2]
Miolla and Lycinia are still backpedalling, looking for an opening as a skeleton advances on them. Miolla crashes her mace down on the thing, smashing in the front of its rib cage but burning her hand badly in the process [she hits for 4 damage, leaving it at 2hp. She takes 2 fire damage herself, and is now at 8hp]. The mangled skeleton make a lunge at Lycina, but the weird iron torch she carries siphons the flames into itself leaving her unscathed [she gets +4 to save from the torch, as with a successful save (which she made easily), takes no damage. The torch drains a point of Wisdom, however].

Having bested his own enemy, Worland moves to avenge Haddie. This skeleton seems nimbler than the rest, and dances out of the way as his axe swings through empty air. It covers Worland in a burst of flame that runs up his side, charring his flesh badly [he takes 6 damage with a failed save, reducing him to 2hp].

Lifstæn gets too close to the now-armless skeleton he faces. The flames surround him, and he falls to the floor, smouldering and unconscious [6 damage and a failed save drop him to -1hp]. Nidbiorg steps over the body of her comrade, and her whirling blade sends more bones flying as the skeleton is reduced to a heap [4 damage destroys it].

[round 3]
Worland is still reeling from the pain of being burnt, and swinging ineffectually at the thing bearing down on him. He staggers a few steps forward, and the flaming skeleton reaches out for him, enfolding him in its fiery embrace. The axe soon falls from Worland's lifeless fingers [he takes 8 damage, even with the successful save he drops to -2hp].

Nidbiorg's fury cannot be contained. She smashes apart the skeleton embracing Worland [9 damage fells it with -3hp], but it is too late to save the injured fighter.

Father Rochouart's right arm is filled with the Might of the Light God Himself. His broadsword strikes true, destroying another of the unholy creatures [8 damage puts it at -4hp].

[round 4]
But two of the skeletons now remain. Miolla's heavy mace reduces one to a splintered pile, Théscine's magical blade neatly bisects the other.

In one corner of the chamber is a pile of silver and copper coins [250sp, 500cp] lying amongst the remains of an old wooden strongbox, but no one pays them any heed. Everyone grimly decides to press on, without even laying out the bodies of their tree fallen companions. Father Rochouart merely whispers a short blessing and makes a holy gesture over the room at large. By then Miolla has forced the door, and they are hurrying through. 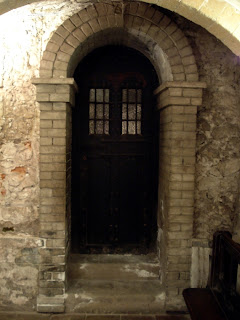 A short -- and this time non-illusory -- corridor empties out into a great circular chamber. There is a recess in one wall containing a glowing doorway, which fills the room with glaring white light. A loud hum emanates from the portal, nearly drowning out all other noise.

As their eyes adjust to the dazzling brightness, the party see a scene of abject horror. The battered and dismembered bodies of perhaps a dozen people lie scattered over the floor. In the midst of the slaughter squats a loathsome, tentacled beast, neither fish nor squid nor man nor plant nor frog, but something I cannot and must not recall. It holds a torso in one of its spiny tentacles, and is busy gnawing on it with the great maw in the middle of its globular torso. When it notices that there are new morsels come before it, it tosses the corpse aside, rises on three stump-like legs, and lurches hungrily towards them.

[I had been looking for an excuse to use the random demon generation tables (OD&D) in the back of Best of Dragon vol. 1; this seemed a good a time as any. As the party is still low-level, I rolled up a mere Level I demon. Hit dice and AC were the same as a Type I (Vrock) according to Labyrinth Lord. It got 2 random powers from the Level I table in the article. Its appearance and (possible) other abilities were to be decided by rolling twice on the random encounter tables and mixing the results; I rolled Otyugh and Locathah. So...

This particular specimen has 29hp.

[round 1 - there is no surprise; it wins initiative]
As it lurches forward, it spits some of its thorny yellow teeth at Aldira, which pass effortlessly through her leather armour and cause her to wince and stagger backwards [its 'Magic Missile' for the day; 2d4=6 damage, leaving her with 12hp; also, (I checked the LotFP rules for clarification) she can't cast a spell in the round she takes damage, but she doesn't lose it either].

Théscine makes a mystic gesture, and throws a shower of green sparks at the beast, which it barely feels [her magic missile only does 3 points; it has 26hp left].

Lycinia lunges forward with her sword, and buries it deep into the demon's fleshy flank. It bellows and stumbles back a bit, black ooze seeping from the wound [8 damage drops it to 18hp].

[round 2]
But the thing swiftly recovers, and launches itself into the fray [its attacks will be made absolutely at random as it flails about This may result in one PC taking two or even three hits in a round]. One its thorny tentacles slams Aldira; the shock of the impact and biting spines break her concentration as she tries again to cast a spell [6 damage puts reduces her to 6hp]. The second tentacle delivers a glancing blow to the furious Nidbiorg, leaving a row of spines protruding from her leather jerkin [she takes 1 damage, leaving her with 6hp]. Miolla steps too close to its awful maw, and narrowly avoids losing her hand to the foul and gnashing teeth [2 damage puts her at 6hp (but her save vs. poison to avoid the disease succeeds].

Many blows land on the creature, but none seem able to pierce its thick and greasy hide.

[round 3]
Miolla deftly ducks under one of the flailing tentacles, but as she does so the other one slams into her side, nearly cracking her ribs [one miss, one hit for 5 damage; she's down to 3hp]. This time Théscine strays too close to the terrible mouth, and its teeth come away with her leather pauldron, and not a bit of her shoulder as well [4 damage puts her at 5hp; she makes her saving throw].

Aldira is out of its reach, and so completes her spell unhindered. A glowing white arrow springs forth form her hand and sinks right into the creatures midsection, splashing the black ooze from the wound over the front rank of fighters [her magic missile does 11 damage, bringing it to 7hp].

[round 4]
Yet it fights on. It swings it tentacle round in a wide arc, catching Nidbiorg squarely in the lower back. There is a sickening crack, and she goes limp [8 damage put her at -2hp]. It scoops her inert form to its mouth, and bites her cleanly in half [5 more damage puts her at -7hp: instant death].

The other tentacle smashes down on the ground just beside Théscine [miss]. The small elf severs it neatly at the shoulder. With black ichor jetting from the stump, the demon wavers and falls [3 damage drops it to -2hp]. The others continue to hack at it, and it is soon evident that it shall never rise again.

"There's no time!" exclaims Father Rochouart, "The portal has been opened. The Light God protect us -- we must go through!" 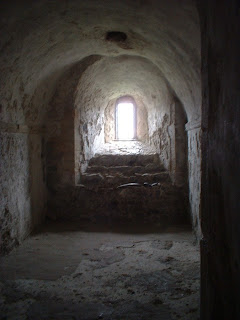