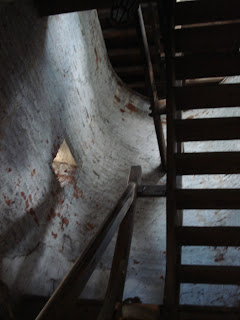 "What's that sound?" whispers Théscine in the blackness of the undercrypt. "I think something's coming..."

"That's just me, dear one," replies Lycinia, "trying to get a torch lit."

"Does that mean you won't let me sleep here?"

"Oh, no. I'm going to need you to be brave and come up above ground with me. We can't stay here. What if more soldiers come?"

"They are more than free to sleep here too..."

"I'm in no mood to play hostess," says Lycinia as the torch finally blazes up. "Come, I'll help you walk. Let's go see if that teamster's deserted us."

Setup: get away from the ruins

Threads: bring the book back to Feyalldra


Lycinia helps Théscine hobble back to the main crypt. She sets her friend gently down on the steps, then goes above to reconnoitre. She is heartened to see that the inside of the ruined church is filled with horses, grazing happily on the vegetation. Burl the teamster walks amongst them, fussing over the lot.

His face loses all colour when he sees the bloodied elf limp out into the daylight. "Are you a-- all that's left?" he stammers.

"No... Théscine is alive, but she's too weak to climb the steps out of the crypt. Look, I need your help. We need to get away from here before nightfall. But I don't intend to leave anyone behind." Lycinia throws Burl the coinpurse she found in Neldir's satchel. "This is yours. And you can keep all the horses, too, once we get well away from here. So, will you help me?"

Burl instinctively catches the heavy coin purse, but does not even look at it. "Of course I will help, m'lady. What must we do?"

The next several hours pass by in a blur.
Lycinia drags the bodies of her fallen friends into the main crypt so Burl need not see the horrors within. She wraps them in their winter cloaks as best she can to spare Burl the further awful spectacle of seeing their injuries. The patient teamster drags them up the stairs, and together they load them onto the horses. Lycinia even removes Géraint and the two berserkers from under their pile of snow.

Meanwhile, Théscine has crawled all the way up into the belltower to act as lookout, ready to fire a warning shot should anyone appear. Fortunately, no troops of soldiers do arrive.

They head away from the ruins, Burl leading the team of horses, the exhausted elves riding ahead of the funerial-seeming procession. At dusk Burl bids them halt, and pitches their tent without a word. Neither of the elves remember crawling into their bedrolls that night. 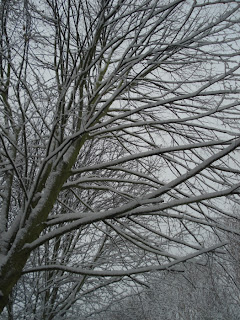 [Time for some die roll catch-up & miscellaneous notes. First off, a few bits from the last scene; it didn't seem right to clutter up the narrative with too many gamey bits.

After the climactic battle, I asked Mythic if anything was attracted by the noise of the fight and blazing fire, and got an Exceptional No. The exceptional no put the idea in my head that the demon lord had indeed been watching, but for some unknowable reason decided to leave them all alone. I may try to remember that in the future when using Mythic to check for encounters brought on by events; an exceptional no will mean that for some reason the about-to-be-encountered party thought the better of it.

The demon is in fact 'imprisoned' on another world, in orbit around a dying star. Since he is still on the material plane, he cannot be summoned. The Vampire Queen was a powerful wizard, and knew what she was doing when she imprisoned him thus, Aber das ist eine andere Geschichte und soll ein andermal erzählt werden. (Michael Ende)

If playing through the little dungeon under the ruins was exciting, playing out the final battle was emotionally exhausting. I hadn't really expected such a high death toll (though when I saw Neldir's starting hit points were higher than the entire party's current combined total, I might have suspected it). And whilst it didn't deter me from continuing the adventure through to the end (and then some), it was emotionally exhausting revisiting it all when I typed it up properly. I'm going to miss Miolla and Aldira, and even Father Rochouart -- as are Lycinia and Théscine. Now, before I get maudlin, let's get back to the present.

When Lycinia asked Burl for his help, it was the first time his Loyalty had been put to the test. Which means I needed to find out what it actually was. Since everything had gone really poorly, I arbitrarily assigned a -2 modifier to the loyalty roll. Then I paged back to find my notes from when Father Rochouart first hired him, where I noted that there was a +2 modifier to the roll from the cleric's charisma bonus and the 150% wages he'd been paid. The 3d6 roll came up 17; his Morale/Loyalty score is 11! So he gladly accepted Lycinia's offer: 76sp from Neldir's purse and potentially 9 horses (100sp each).]

All three sleep soundly through the night, and the elves through most of the next day. Théscine is too weak to do more than eat a little food, but Lycinia gets restless. She studies her spellbook for a while, then decides to find out what the scroll in Neldir's pouch is about [casts read magic]. The magical writings crystallise before her eyes, and  and an idea comes into her head; but it is one for the morrow.

Also, as there are no encounters, both elves recover 1 hit point for the day of rest.] 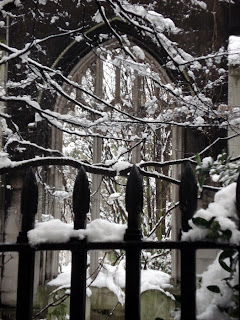 Leaving Théscine in the camp to rest, Lycinia and Burl ride back to the ruins, which they are pleased to find still abandoned. Lycinia takes some of the burnt remains of one of the horrible trolls, and encases them in snow, which she fashions into a crude troll-like shape. She reads a spell off the enchanted scroll [simulacrum] out loud over the snow troll she has created, which grows and solidifies into the exact likeness of the awful creature -- only this one is under her command. She bids it dig three graves with its terrible claws, one close to the foundation of the ruined church, the other two a short distance off.

She and Burl return to camp, and after she has checked in on Théscine, they load the bodies of the fallen heroes onthe horses and take them back to the ruins for burial. "Some day I'll come back," she tells the teamster, "and set them up with proper monuments. Maybe even rebuild the church and have it reconsecrated for Father Rochouart and Géraint. What religion do you think the berserkers were?"

As they wait for the troll to finish its task, Burl mostly fusses over the horses whilst Lycinia sits down to examine the vellum book which was the cause of so many sorrows. The book itself is not very old, perhaps only a few centuries, but the knowlesge contained within dates -- or so it claims -- from millenia ago. It is written in literary elvish, in a neat and regular hand. The title page proclaims, "The Forgotten Reckoning of Bliss, Recorded in Times Past by an Enraged Pharoah, rendered faithfully into Elvish by Meêrethinaar, Scribe to the Goblin Court". Within are many strange diagrams, figures and characters, from which certain minor magics could probably be deduced, but on the whole the mad ravings of some long-forgotten ruler hold no interest for the weary elf. Still, it beats watching a troll dig...

When all have been buried, Lycinia lingers a bit over the graves, until Burl reminds her they need to get back before sundown. The troll is left behind with instructions to challenge all comers; anyone fighting under the banner of Baron Forzdeleu is to be told that the quest has succeeded and be allowed to pass, all others are to be destroyed.

[Again, no encounters. Théscine gets back 1 more hit point for rest.]

Théscine is finally feeling able to move about [2/9hp]. She and Lycinia spend an hour in the morning poring over their map of the kingdom, trying to plot a route back to Feyalldra. There is a tower less than a days ride (hopefully) to the north west. Neither of them have any idea about it, but they decide to try their luck there in hopes of spending a few days out of the cold to recuperate from their injuries. They set out as soon as they've packed up the camp (Burl is happy to do most of the packing), and by nightfall the tower is visible in the distance before them.

[Travel to the tower takes 6.5 hours.

The tower is round and tall, about 4 storeys high, and in good repair despite its obvious age. Light blazes forth from windows on many floors, but for once no patrol rides out to meet the party. Burl and Théscine keep a respectful distance as Lycinia rides up to the tower to see who's home.

The heavy, iron-banded door of the tower opens ever so slightly, and a boy of about 17 appears. Lycinia is certain she can see a pair of crossbowmen lurking in the shadows behind him. He looks a bit perturbed at the state of the stranger standing there in broken and bloodied armour, but as she throws back the hood of her cloak, his face brightens. "Friend," he asks, in somewhat broken elvish, "what brings now you to the home of the my master?"

Lycinia briefly explains what has befallen them on their quest, and within the hour burl has been led to a nearby hamlet to stable the horses, and the elves are enjoying the hospitality of the wizard's tower.

The tower is the home of Efalgyt the Enchanter, a scholarly old wizard who prefers the solitude of his laboratory to the whirl of society (and hot-bed of machinations) at the guildhall in Ildmarch. He is still a member in good standing, and teleports over at least twice a year 'to put in an appearance'. During one of these visits he reluctantly consented to take on an apprentice, the young Orneld, who is still at the stage of sweepin gup and answering the door rather than working any actual magic.

Efalgyt is the very image of a traditional wizard: about 60 years of age, lanky, with a long grey beard [actually rolled with the d30 Sandbox companion]. He is unfailingly polite, and interested in nothing so much as his studies. He also suffers from a strange curse...
Posted by Alea iactanda est at 10:45