or, potions and their labels. 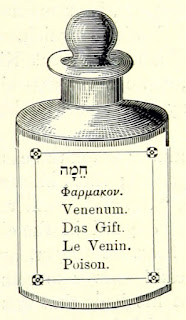 This came about as the conflation of two ideas that had been knocking around in my head about fantasy RPG treasure.

NPCs can and should use any magic items in their possession just like PCs do. But PCs often acquire items of whose function they are ignorant, at least for a time. Why then, should NPCs be any different?

Potions are a common and useful treasure, and part of the fun of them has always been figuring them out -- usually by seeing who in the party is brave or desperate enough to drink one without knowledge of its effects. All well and good as a sort of trope, but why is it that no one ever thinks to put a damn label on the bottle?

The following tables can be used whenever potions are found as treasure or carried by encountered NPCs, to determine (separately) whether a potion is labelled and whether or not its owner knows the true contents of the vial. They are written with Lamentations of the Flame Princess rules in mind, but should be easily adaptable to any fantasy game, OSR or otherwise. The base assumptions are that potions of the same type do not necessarily have similar the same colour, taste, etc., and that it is not possible to determine the effects of a given potion from just a small sip. It also assumes that it is possible to have alchemists or wizards examine a potion to determine its nature (for a fee), and that these sorts of persons will naturally be found in larger settlements.  As always, the circumstances of your campaign will take precedence.

The first set of tables deal with the possibility that a potion is labelled. The second set is used to determine how a label is written, and the third determines whether the label is accurate. There is a subsection to determine if an NPC possessing a labelled potion knows what it is, including a chance that they are actually mistaken. There is a separate section at the end to determine if an NPC knows the nature of an unlabelled potion, or one whose label they cannot read.

That the tables are written as though a single NPC is encountered. If an NPC party is encountered, use the modifiers for the single best character in the group -- assuming that they get on well enough to not sabotage their companions. If you're in a hurry to flesh out an encounter, it might be best to ignore the labelling until afterwards, in which case just skip to the end and roll everything on the Unlabelled/Unknown chart.

Step I: Is the potion labelled?

If a potion bottle is unlabelled and in possession of an NPC, skip directly to Unlabelled/UnknownPotions to determine their knowledge of the contents.

Step II: Can you read the label?


If multiple potions are found together, the labelling scheme is very likely to be the same for all of them (roll of 1-5 on a d6). Roll 1d10 on the following table to determine how the potion(s) are labelled. Exact languages will depend on your campaign, of course.

* location dependent; if the potion is found in the ruins of the Lost City of the Zorg, then this would be Zorgese, the same result as rolling a 2. If it is in the possession of a 1st level fighter you meet in the tavern of Adventureville, it's in Common.

** magic-users, elves, and alchemists make a language roll at +3, all others have normal chances. Scholarly languages are often ancient (e.g. Latin in the Middle Ages) but may also be modern languages (e.g. German in 19th century Europe), or even monstrous tongues (Draconic et al.).

*** either a modern language spoken by an uncommon or distant PC race, or the tongue of some monstrous species, local or otherwise.

†† only intended for the writer's benefit. Indecipherable by normal means.

§ magic-users and elves make a language roll at -1, all at others -3

N.B. Language rolls are as described on page 37 of the LotFP Rules & Magic Book. In brief, the check succeeds on a roll of (1 + INT modifier) or lower on 1d6. Rolling to read a potion label will not necessarily imply that a character has full knowledge of the language in question, rather that their familiarity with the tenets of alchemy and magic is such as to provide exposure to ancient and esoteric terminology. LotFP uses the same attribute modifiers as Labyrinth Lord and B/X.

Assuming the label can be read, it will be necessary to determine whether or not it tells the truth. A roll of 5 or less indicates a true label, with the die type determined by the following circumstances:

If an NPC has a falsely-labelled potion, roll 1d8 or 1d10 (die type as above) on the following table if they are able to read it:

Circumstances will dictate whether or not an NPC imparts this information to the PC(s), though rolls of 8+ will almost certainly result in the NPC lying.


An NPC possessing a potion with no label or a label they cannot read will still have a chance of knowing what the potion is. A roll of 6+ indicates that they do know what a given potion is (check for each separately). The die type is determined by their general location at the time of the encounter.

The location assumes that potions will be found in dungeons, lairs, etc., and typically must be taken back to civilisation in order to determine their true nature. The closer an NPC is to civilisation, the more likely it will be that they will have managed to identify a potion or pay someone else to do it. If the NPC's reason for being somewhere is more definite than 'random encounter', roll the most logical die type. E.g. an assassin who has tracked the PCs from the city and decides to strike at them whilst they are exploring a dungeon would have a d12 for the civilised area they had been in until just recently.
Posted by Alea iactanda est at 09:39

Email ThisBlogThis!Share to TwitterShare to FacebookShare to Pinterest
Labels: tables