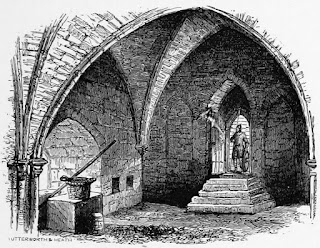 The next (real-life) day I made a new party and sent them in. I also made the post-TPK time passing table. I will be coming up with some sort of rules/guidelines for degradation of dead PCs' equipment and its use and occasional removal by dungeon dwellers at some point to add to the table. This next adventure takes place but 6 weeks after the first. The guidelines in everyone's favourite adventure module (B2) say that rooms will be restocked after 1d4 weeks. This seems reasonable, though I will add the proviso that living monsters tend not to move into places that were formerly occupied by undead, unless they are somehow unnatural themselves.

TABLE IX: Time to next expedition
If an expedition results in the death of all members, or if the survivors of a mission all quit adventuring forever once returning civilisation, roll 1d6 and 1d12 on the following table to determine the length of time that elapses until your new party descends to find certain death fortune & glory.

Right, then: to adventure!


A small, perhaps somewhat ill-equipped band made its way through the forest, following the tracker they'd hired in the village. Their 'leader' was a man named Bonnart, a reluctant warrior, whose brother Ardulan had disappeared in the region on a mad quest to plunder the fabled Vile Vaults of Valistraktis. Bonnart had spent nearly all his savings of a fine mail hauberk to protect himself from the nightmare dangers he knew he would have to face in his quest.

With him came a motley bunch [all rolled completely randomly as before. Weirdly, they all ended up being male].

There was Pseltus, the gigantic, battle-scarred veteran, whose life had once been saved by Ardulan. He felt he owed the man a debt of honour.

Then there was Yastrax, a novice wizard, who hoped to find great secrets of magic hidden within the Vaults.

Tirnéal was an elf from a far-off land of wonders. None knew why he had joined the band, but he did pledge his stout spear in its defence... and made further vows in a fey tongue that none could understand.

Friar Falon was a holy man from Bonnart's village. He could not let the lad face the terrors of a wizard's dungeon alone.

Last was Nol, a jack-of-all-trades from the big city. He readily admitted that he was just along for the treasure.


The tracker has little trouble following the trail of Ardulan's party through the woods. Dwarfs, he explains, move through forest about as subtly as elephants. But when he finds the overgrown ruins, with the staircase leading down into darkness, all hint of jocularity vanishes. He accepts his silver from Bonnart, and runs back hastily to his village.

Falon lights his lantern, Nol a torch, and they all make their way slowly down. 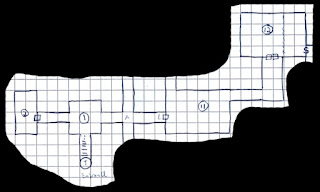 [As long as they are in a previously-explored part of the dungeon, they will always proceed in a random direction. The elevator room trap [Room 10], I decided at some point, is triggered when someone tries both normal doors in the room. Entering or leaving by the secret door is the only way to circumvent it.]

The room at the bottom of the stairs [Room 1] shows obvious signs that someone has been here. Some open coffers are slowly filling with green slime. Scorch marks on the walls and the coffers themselves attest to the slime having been burnt away, but the pernicious stuff has already grown back.

Bonnart leads his fellows down the left-hand corridor, and boldly opens the door at the end. Within [Room 2] are many strange, hopping toad creatures, gurgling to one another and brandishing crude spears. Their voices all stop at once as the door opens, and they direct their beady-eyed gaze at the newcomers. [Reaction roll=4] They seem to resent the intrusion. 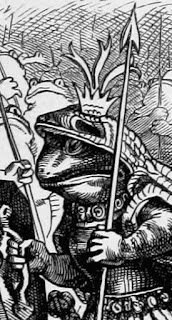 [Round 1 - the creatures win initiative]
Three of the [4d4=9] creatures advance toward the door, and jab their spears at the fighters in the front rank, who knock them away with sword, shield, and spear [defencive fighting]. There is little room to manoeuvre, so the warriors stage a fighting withdrawal and back down the corridor, whilst their less-disciplined fellows rush back to take position in the entrance chamber.

[Round 2]
In spite of this, both the front rank fighters are jabbed during the retreat [Bonnart takes 4 damage, leaving him with 5hp; Pseltus loses 6, putting him at 3hp].

[Round 3]
Some quick footwork has put Pseltus and Nol blocking the doorway with swords in hand, whilst Bonnart and Tirnéal use the reach of their spears to attack from the second rank. Being similarly armed, and of small stature, the toad creatures can field 6 attackers between their two ranks. Pseltus is stabbed right through the stomach [4 damage drops him to -1hp] and falls down, senseless. His sword skitters away over the stone floor. Both Bonnart and Tirnéal manage to drop one of the fell creatures.

[Round 4 - forgot to check morale but they were still ahead numerically]
The toads form up ranks to replace the fallen. Fr. Falon calls upon the power of the gods to succour the injured Pseltus, and bravely darts past the stabbing spears to put his hand, glowing with divine radiance, on the fallen warrior [Cure Light Wounds heals 1d6+1=6, bringing him back to 5hp].

[Round 5]
Perhaps it is that the strange glow cast fear into the black hearts of the little fiends, for they cannot touch the cleric. Bonnart is not so lucky, and sustains yet another cracked rib beneath his mail coat [hit for 1 damage, down to 4hp]. Nol fares even worse, and finds a pair of spears sticking out of his gut [4 & 2 damage, he's at 0hp]. He falls in a swoon. Pseltus takes the cleric's sword as he stands, and immediately cuts down the beastie in front of him. Yastrax moves up to cover the fallen Nol, and lays another of the things low with his own blade.

[Round 6 - ML check succeeds]
Caring little for their fallen companions, the things press forward. Bonnard [2dmg, down to 2hp] and Pseltus [3dmg down to 2hp] both take a spear in the leg. But both their attackers soon lie dead at their feet. And Yastrax fells a third.

[Round 7 - ML check at -2 succeeds]
The toad creatures are intent on fighting to the bitter end. And that end comes swiftly from the swords of Pseltus and Yastrax.

Three of the things are wearing shoulder bags, which together contain the princely sum of 133 copper coins. The party decide that they are in no condition to explore further today and limp back to the village, where they spend 90cp on cheap lodgings, and the rest on even cheaper beer.

[No encounters on the way out or the way back.]

Four days later, all healed and rested, they once again descend into the Vile Vaults. The bodies of the reptile creatures appear to have been undisturbed, so they decide to explore the other direction.

They pass straight through an intersection [A] and continue on to a stout door [L]. Behind the door is a foetid-smelling room [room 11 - monster & environment], with water dripping down through the ceiling and collecting on the floor in brackish puddles [the environment; anyone rolling a 1 in combat will slip and fall]. 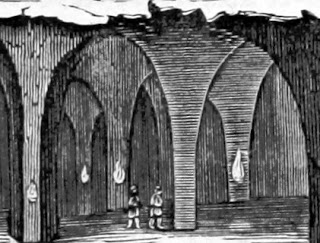 Lurking silently near the ceiling are a pair of unusual creatures, 2' diameter spheres of blubbery flesh with long, barbed tails. They seem lighter than air, and propel themselves around at incredible speed, and by entirely unknown means.

[Round 1 - no surprise, PCs win initiative]
Yastrax raises his crossbow and fires at the nearest one, but his bolt sails right past it and clatters off the far wall. Tirnéal's thrown spear does the same, though louder. One of the creatures dives at the elf, and another at Pseltus, but both manage to block the barbed tails with their shields. Pseltus lashes out at his attacker as it sails by, and his sword opens a nasty wound in its thick hide [6 damage drops it to 5hp].

[Round 2]
They speed by on another pass, this time switching targets. But the barbs once again rebound off shields. Tirnéal pokes the injured one with his stabbing spear [3 damage leaves it with 2hp], but Pseltus' sword cannot reach his.

[Round 3]
On its next pass, Pseltus feels the cruel barb tear through his shoulder [6 damage drops him to 3hp].

[Rounds 4-5]
It swoops by once again, and then again. But this time Pseltus' sword is driven straight up through the creature 6 damage drops it to -4hp], and it expires with a loud pop. Tirnéal barely grazes the other [1 damage].

[Round 6]
Yastrax finally hits with his crossbow [6 damage puts it at 3hp].

They exit the room down a passage that turns left to become 20' wide, and ends in a set of double doors. The room beyond the doors [room 12 trick/trap - illusionary wall conceals monster & treasure] appears nearly empty, save for débris and general filth scattered over the floor. The party enter cautiously, and begin poking through the detritus to see if anything of value is mixed in. 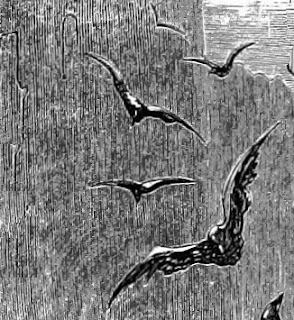 Suddenly -- seemingly out of the very wall -- a half dozen stirges flit forth, thirsty for blood. Bonnart, Yastrax, and Fr. Falon are hit by the tiny monsters, pierced by their hollow, lifeblood draining proboscides. A short, but furious fight ensues, as they try desperately to fend off the horrid things, and keep them from gaining their deadly purchase. Fr. Falon faints from loss of blood, but he is rescued from certain doom by a grateful Pseltus, whom he had once brought back from death's door.

The battle concluded, Pseltus tries to revive the unconscious priest [who is down to -2hp]; the man lives, but his breathing is shallow and uneven.

The others have meanwhile discovered the creatures' nest behind the illusory wall. Hidden amongst the droppings, sticks, scraps of fabric, and dessicated corpses of vermin, is a trio of shiny gemstones [Treasure Type L: gems worth 50sp, 10sp, and 500sp].

As there isn't a single one of them who isn't wounded, and the Friar is not even conscious, they decide to leave the Vaults, and head to the city to trade the gems for coats of mail, fine steel swords, and lodgings fit for a band of heroes. There they rest in luxury for the better part of a week -- all the while planning their return to the Vile Vaults...