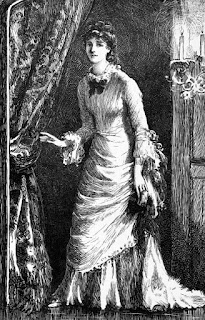 Having been shut into their chambers, our hero and heroines immediately set about devising means of escape. It will take more than a locked door and a few guards to stop these intrepid explorers! Or will it...?

Aurélius removes his belt and tries to use the buckle's tang to pick the lock on his chamber door. [DEX save required for the improvised tool: 14=fail] It proves a most unwieldy lockpick, and Aurélius soon gives up and decides to go to bed.

Fridoline, meanwhile, has mad an exhaustive search of her room, looking for any item of possible use. She looks through the wardrobe, under the bed, within the pillows, at the backs of the armoire and vanity, beneath the fainting couch... all to no avail. [But her WIL save=5, success; she'll get a random item from the Labyrinth Lord AEC Miscellaneous Room Contents table, but whatever she finds will be in a more usable state than the table describes. 1d100=38: key! Normally I wouldn't allow something so easy, but that is such a lucky roll I kept it.] Finally, at the back of a drawer she finds an empty carton of bon-bons, in which has been hidden a tarnished brass key! But what is that sound at the window...?

Whilst Fridoline was searching and Aurélius was giving up prematurely, Randeep had determined on a more daring course of action. She goes to the window, only to find it locked. The whole is secured with strong iron bars, so breaking the glass is futile, but the locking mechanism doesn't seem terribly solid. Putting her back into it [STR save=2, success], she soon has forced the window open. 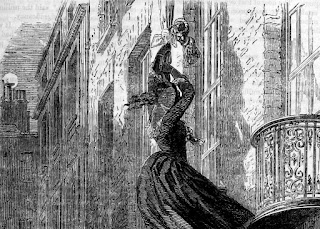 She makes a rope from some bedsheets, which she fastens to the iron bars; it's not a long drop, but a fall would put her directly into the seething, acidic moat. Then she's out the window and creeping along the wall. [DEX save to reach next window without incident: 4=success; Whose window is closer? 1-3 A, 4-6 F; 4]

Randeep has soon inched her way over to Fridoline's window. She raps on the glass soundly. The curtain is drawn aside to reveal Fridoline's quizzical face. "Oh, it's you!" she cries. "Thank heavens!"

Fridoline examines her key and frowns when it proves far too large for the window lock. She gives the frame a mighty shove [STR save succeeds] and it opens with a groan. Randeep clambers inside her chamber.

"This isn't our boarding school," scolds Randeep. "We need to escape this madhouse. Maybe together we can force the door..."

"I hardly think that's necessary. Look what I found!"

"A key! Fridoline, I could kiss you... if we live through this."

"I shall hold you to that. But we're going to need some weapons first. Do you think these chair legs would do if we break them off?"

[Q: Can they improvise clubs 50/50 (4+): O5 C5 - Yes
+Event: PC negative - Ambush / Evil
1d3=Aurélius
I have plenty of pictures that could illustrate this Event, so I looked through the folder and picked the first one whose victim can pass for Aurélius. The monster stats were built off the picture and the following Oracle result--
Q: Why did they attack? Propose / Dreams
NB: monster stats have been moved to the end of the section as they got verbose] 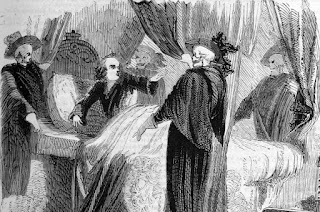 Aurélius is just starting to drift off into sleep when he has a most alarming presentiment of no longer being alone. The moonlight is streaming in his window, whose iron bars cast strange shadows over the floor and furnishings. Some of the shadows seem even to move. Aurélius peers resolutely into the pools of darkness in the corners, but the sight that appears to him causes his blood nigh to freeze. For out of the darkness step four skeletons, their bones gleaming white in the moonlight, and their skulls grinning with malice. Each is flamboyantly dressed in the costume of a highwayman, and they swagger forth to surround the bed, one standing at each bedpost. Each points a bony digit at Aurélius opens his mouth to scream, but emits only the tiniest squeak. The chill of the grave washes over him as the fiends approach, and as they touch him with their dead hands he is overcome.

Aurélius sinks down in the bed. His soul threatens to fly from his body and never return, whilst his mind is beset with such wild fever-dreams as even the most opium-addled of poets have sought after in vain. With each new vista that Morpheos shews our young hero, there is but one constant: a shop, a shop in an upscale quarter of Bastion -- a real place! -- where he had once bought his Liebchen a most divine Gift. 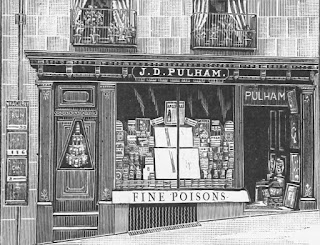 [I rolled a d4 to see where the shop was: 1 Bastion, 2 Burthen, 3 Morve, 4 random hex; he'll be obsessed with going there after the mission is complete.]

A skeleton highwayman will be armed with (1d6): 1 sword (d6), 2-3 rapier (d8), 4-5 rapier (d8) & pistol (d6), 6 rapier (d8) & brace of pistols (d8). Against a defenceless enemy, they find weapons unsporting, so instead attack with their Chill touch. The Chill Touch inflicts 1d6 damage; after hit points have been depleted, excess damage comes off Willpower. The target must them make a WIL save to avoid the effects of Critical Damage (and will die without outside intervention as per the Critical Damage rules). Those roused from the deadly sleep will report wild nightmares, and will acquire some sort of obsession based upon the dream imagery. Those who expire from the Chill Touch will rise as a skeletal highwayman on the following evening.

Fridoline tries the old key in her chamber door. It fits! She pushes it open and peeks quickly out into the corridor: there are [1d6=] three guards...

... clad in old-fashioned armour, and bearing sword and shield. he ducks back in and tells Randeep what she has seen. 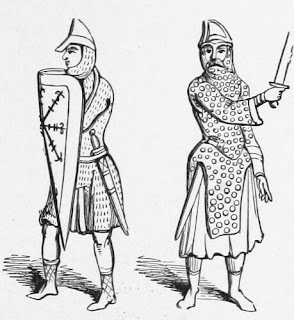 Fridoline takes up position against the wall near the door as Randeep sneaks out into the corridor. [DEX save=13, success] She pads stealthily right up behind the nearest guard, who is utterly disregardful to his surroundings. She brings her club down upon his head with a mighty crash, and hears his neck crack with the impact. [the ambush makes her attack Enhanced: 1d12=7; he has (3d6=) STR 5, and (1d6=) 1HP. Even with the point of armour, he's dead.]

The sound of the blow startles the other two guards from their vacant reveries. They run right at Randeep, swords held high. She wheels about and sprints back into the room, [DEX save to make it back before the first round of combat: 14, success] the guards hard on her heels.

She bursts into the room, and Fridoline hesitates just a moment too long [PCs lose initiative].

The swordsman takes a fierce swipe at Randeep, but she ducks under it just in time. The swordswoman spots Fridoline coming up behind, and wheels about with a flourish. The point of her sword catches the skirt of Fridoline's gown, and leaves the barest scratch on her thigh. [Randeep took 3 damage, leaving her with 3hp; Fridoline took 2 damage dropping her hp exactly to 0.]

Both women fight back with the fury of an amazon (if I may mix my classical metaphors). Soon the guards lay senseless and bleeding at their feet. [Randeep did 4-1=3 damage to Alfie, putting him at 12 STR; save=14, critical. Fridoline did 6-1=5 damage to Beth, putting her at 8 STR; save=9, critical -- that was lucky for my PCs!]

They waste no time in trading their clubs for swords, and dispatching the guards with them. They search the bodies quickly.

One of the guards has a keyring with about two dozen keys to other rooms in the castle -- unfortunately unlabelled, but they have nothing else of use.

When Randeep and Fridoline go quietly into the hall to retrieve the body of the third guard, they chance upon a chambermaid. The girl is so frightened at their sudden appearance that she nearly drops the tea tray she bears. Randeep drags the corpse and Fridoline ushers the maid into the room.

"We weren't really planning on it," says Fridoline cautiously.

"I can give you information that might help you escape," says the maid, "but I'm afraid that's all I have. Well, that and this tea tray. Biscuit?"

The three make themselves comfortable and the maid serves them tea as they converse [this is a short rest, so the PCs regain all their HP]. 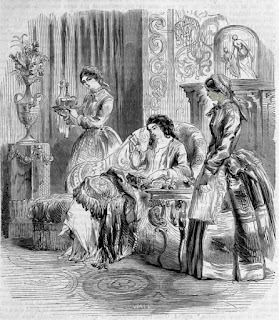 "The lord of the manor," begins the maid, "isn't out hunting at all. That's just what they always tell new guests. He's really somewhere in the castle dungeons, and won't come out... or can't. I'm not sure. But the task they have set you -- to recover the arcanum -- that isn't for him. They intend to use its power against him somehow. You're not the first group of explorers who've been sent forth. But none of the others ever return for their friends."

"We're seeking a group of three lost explorers," says Randeep. "Perhaps they have fallen into this same trap. A Captain Thumbscrew, Miss Wolverhaven, and a giant axeman called Murt."

"Sorry, miss. No one like that has been here."

"Then we need to leave here at once," says Fridoline. "We cannot afford to tarry."

"Please take me with you!" pleads the maid. "I know the castle inside and out, and I know where your three friends are held. I want to escape this awful place just as much as you do."

"Here's the deal," says Randeep. "You help get us out of here and we'll bring you along. But betray us and you'll wind up like them!"

"Don't you worry, miss. I just want out. And maybe a good reference."

The three hurriedly finish their tea and rush to Aurélius' room. They find him a-bed, thrashing about in the throes of some terrific nightmare. He babbles a few inscrutable words when they wake him.

"Are you alright?" asks Randeep "Can you move? and fight?"

"Here," says the maid, "we saved you a biscuit and some tea." [restores his lost HP.]

"And a sword," adds Fridoline.

"Do we have a plan?" asks Aurélius.

"We need to attack this problem at its source," says Randeep. "We're going to find the housekeeper and make her our prisoner. Then the guards won't dare attack."

"Some will even join you," adds the chambermaid helpfully. "You'll be heroes!"

"Excellent," says Fridoline. "Now wipe the crumbs from your mouth and let's get to it." 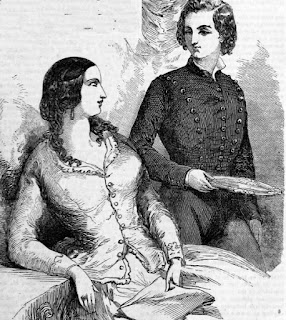