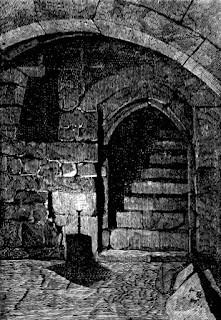 The chambermaid shows the explorers through the twisting passages of the old castle. Aurélius charges out in front of the band, in an attempt to assuage his conscience -- he shouldn't have given up trying to break out of his room so easily. Perhaps the skeletons were just part of his awful dream, brought on by the dual-edged sword of indigestion and conscience. Yet, he must admit, he's never felt quite such an overpowering longing for a single place before, and try as he might to forget it, the image of the poison shop seems impressed upon his grey matter.

[As I 'm playing without a map, I'm using the Oracle to determine what happens between goals. I'll ask the same question each time, improving the likelihood by one step after a successful encounter (or indeed raising it after a disaster). So, then:

Encounters are all determined by random pictures, as it takes less time than writing up encounter charts.]

No sooner has the chambermaid indicated a door but Aurélius has thrown it wide and is charging through. Thus it is that he runs right into a group of four soldiers. 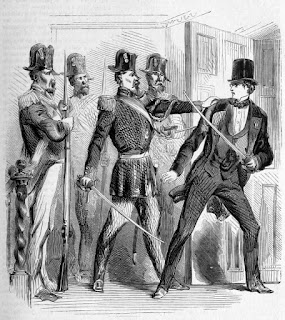 [The soldiers' leader is Charles. Aurélius is leading the PCs at the moment, so he makes the WIL save for initiative: 8=success.]

There is a brief moment of panic as the two groups realise who they are facing, and then the explorers fall upon their hapless foes.

Randeep's sword flashes, and the first of the musketeers falls at her feet [Paul takes 5 damage, leaving him with 4 STR; he failed his save against critical damage].

Aurélius swings own blade in an overhead arc, but the second musketeer catches the blade on the barrel of his gun [4 damage puts Jules at 1hp].

Fridoline lunges at the nearest swordsman, and runs him clean through [Arthur takes 6 damage dropping him to 2 STR, and he too fails his save against critical damage].

The officer in charge of the unit barks out an order, « merde alors !», which must be the pre-arranged signal for retreat, for that is just what he does. The other soldier left standing follows his captain, and the two disappear down a side passage at full speed.

[With losses at 50%, Charles needed to make a WIL save for his unit's morale; he failed on a 19. I gave  Charles and Jules each a DEX save to escape the predations of my PCs, who are not at all above attacking a fleeing enemy from behind. The dice gods gave them a 2&3 respectively, so they escape with their lives.

Q: Will the escapees report the encounter? Likely (3+): O2 C1 - No, and... they will keep quiet, fearing punishment for dereliction of duty.

This was essentially a draw, so I won't be adjusting the encounter likelihood either way.]

The two soldiers have disappeared in the labyrinthine corridors before any have a chance to give chase. The explorers don't waste much time looking for them. The chambermaid is given the fallen soldier's sword, though no one really expects her to fight. Fridoline takes the musket.

"Quickly," says Aurélius, "we must hurry!" And they're off again. 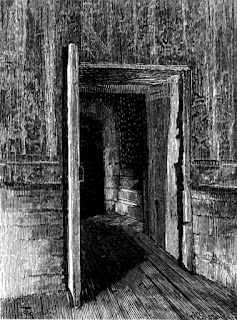 [Q: Can they get to the housekeeper without more encounters? Unlikely (5+): O3 C4 - No, but... trap/hazard rather than encounter.]

Her words trail off as they round the bend, to see the passage blocked by a whirling iron gate. 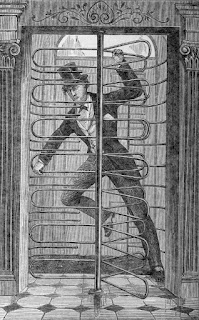 "But two soldiers got away," says Randeep. "What if they return with reinforcements?"

"She's right," says Aurélius. "We've no choice. Allez-hop !" And with that, he dives into the rapidly revolving iron structure...

[DEX saves are required to get through unharmed. The trap does 1d8 damage otherwise. This means it's also time to roll up the maid (as a 1hp companion; she's even (very coincidentally) got a sword).]

... and emerges unscathed on the other side. Randeep follows, leaping gracefully through. Fridoline follows suit, but makes a terrible error in judgement. The whirling iron bars slam into her, knocking her senseless. She get caught in the gate, and ends ups spinning round and round, hanging from it in a tangle of limbs and iron. [She took 5 damage, dropping her to 8 STR; she failed her save to avoid critical damage.]

"Fridoline!" gasp her companions, as they watch her revolving helplessly.

"We've got to pull her free!" says Randeep.

"I'll try to stop the mechanism, if you can disentangle her from it," replies Aurélius.

The chambermaid cannot bear to watch as the explorers attempt this most desperate manoeuvre. But the ease and finesse with which Aurélius leaps in to halt the whirling mechanism is exceeded only by the deftness and agility that Randeep displays in freeing her trapped comrade. By then Aurélius can strain no more against the terrible machine. He lets go as he falls back into the passage.

"Please," begs the chambermaid, looking across the whirling iron bars, "don't leave me behind." She counts ten and takes a great leap... and comes through the other side in one piece.

Aurélius takes up the unconscious Fridoline in his arms. "We mustn't tarry," says he.

"I agree," says Randeep, taking charge of Fridoline's musket. "Where to next?"

The chambermaid leads them through another maze of corridors. The walls are a uniform series of hardwood panels, which nearly conceal the occasional chamber doors they rush past. Soldiers could appear from almost any direction, but the brave maid waves away the explorers' concerns with a casual gesture. Then finally she stops before a door, indistinguishable from all the rest, and opens it. "We can rest in here a moment!" With no choice but to trust her, the explorers duck inside, and she shuts the door behind. 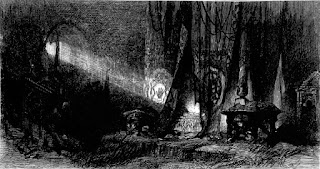 The room is some sort of forgotten chapel. Heavy velvet curtains conceal the walls, and disappear up to a high ceiling, constraining the room and making it feel somewhat claustrophobic. Scattered here and there are bronze tripods and great drums. The dust of aeons lies thick upon the floor and furnishings. The chapel is in almost perfect blackness, but a dull gleam comes from one corner. The eerie glow waxes before the explorers' astonished eyes, as the light streams down upon the altar, making the shadowy figure of a hand appear upon the holy-of-holies.

"Where are we?" whispers Aurélius.

"The Chapel of the Hand of Sabazius," replies the frightened maid. "No one ever comes here!  we should be safe, if..."

"If what?" asks Randeep.

"If we can stop the energy of the Sacred Hand from destroying us!"

"What?" exclaims Aurélius, "Why the blazes would you bring us to such an awful place?"

"Singing?" asks Aurélius. "What singing? Are you sure you didn't hit your head on the revolving gate, my dear?"

But Randeep can no longer hear her companions, nor even see them. For she is not in the room anymore, not in the castle. She is far, far away, in a rugged and mountainous landscape, standing amidst the ruins of an ancient temple. Though the singing is loud in her ears, and the flutes wail, and the drums pound, she sees not a soul about her, save one -- a beauteous youth in a Phrygian cap beckoning her to him. She walks up to the radiant youth slowly, entranced, and he holds out his hand. She presses her palm against his as the music reaches a crescendo, and then the light overcomes her senses... 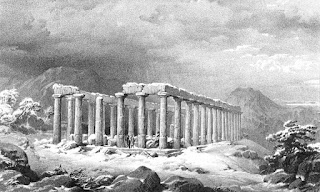 Randeep Khartoor is not the sort of woman who is in the habit of lying sprawled on dusty altars and being slapped in the face by domestics. And yet that is just where she finds herself, and for a few moments has no recollection of how she got there.

Aurélius is standing near the pair of them, trying desperately not to burn his fingers as he lights a yellowed altar candle. "She's opened her eyes now," he tells the maid. "That's your cue to stop hitting her. If you know what's good for you..."

"Where am I?" says Randeep. "I feel so strange. How did I get inside?"

"Inside?" asks Fridoline. "Did you hit your head when you fell, darling?"

"You walked across to the altar," explains Aurélius, "to the image of the hand on the wall, and put your palm against it. Then the light stopped shining, and we heard you collapse."

Randeep looks round for a few moments, and the remembrance of what had passed slowly comes over her. She looks down at her hand, which she can see glowing very faintly in the gloom.

Randeep calmly explains her vision to her companions, who are not sure what to make of it. But she feels the power welling within her -- for good or ill, it is hers to command.

[I had decided that she needed to make a WIL save when touching the Hand; a failure would have released the power upon everyone in the room. The nature of the power was determined as if it were a 1-use spell in Maze Rats (from the Oddpendium); it's a Consuming Blight Vortex. I'll roll 1d3+1 for its Circle when used. Thus is the blessing -- or the curse -- of Sabazios.] 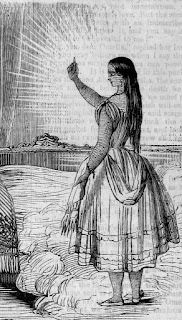