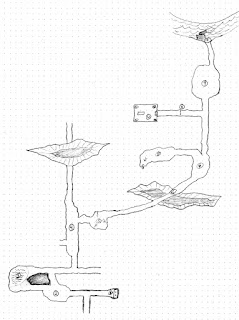 The corridor ends in a long, narrow chamber [room 12 - special - sépulture]. The walls are carved with faux columns, between which once-vividly painted frescos are suffering from mould and rot. Four massive bronze statues occupy the four corners of the room, each depicting a winged genius or demon. Each statue has but a single eye, which glows with a cold, blue light. In the centre of the chamber sits an enormous, open sarcophagus of polished black marble, from which even now a terrible figure is emerging, a long-dead warrior clad in corroded mail and wielding a rusting sword.

The HD notation indicates that the wight has only 3 hit dice, but is a 4th level monster. It can thus attack all four 1st level PCs (and is worth more XP).

There was no surprise on either side.]

The hollow eyes of the undead horror are incandescent with hatred for the living who have disturbed its rest. It clambers out of its sarcophagus and lurches forward to meet them in battle.

[Round 1]
There's still might left in those dead limbs. Even surrounded, the wight is a fearsome opponent. But the fear and desperation spur our heroes on to greater things. Kurg stabs right through the thing's crumbling armour, and hears bones splinter inside [3 damage drops it to 9hp]. Nadilla bathes the wight in crackling blue energy which burns through rotten skin and cracks ancient bones [8 damage leaves it with 1hp]. Zarain and Délia make several feints with arms of sorcery and steel, but the wight's furious sword arm keeps them at bay.

[Round 2]
The wight makes an overhand swing at Kurg, and the barbarian brings his shield up before his face at the last possible instant. The sword and shield meet, and both shatter as the powerful blow crashes down on the heavy steel boss. Kurg feels a wave of cold pass over him. [both rolled a 10 on their attack, and then a 6 for damage, with the result that each has a weapon or shield break. A wight's energy drain works on any successful hit (claws or weapon), but this wasn't quite a success for it].

The wight is momentarily distracted by the loss of its weapon, but its claws are no less dangerous to the living. Nadilla discharges another burst of mystic energy at the thing, causing it to stagger back a pace, right into the path of Délia's axe. The wight is crushed to powder by the impact, and is no more. Only a pile of rags and rusted chain links remain to tell of the tomb's occupant.

Behind the sarcophagus is a low, open stone basin full of gold coins [800gp]. Kurg, Zarain, and Délia begin shovelling the coins into sacks by the handful, as Nadilla searches the walls of the chamber.

"So much gold!" says Kurg holding aloft a bulging sack, his eyes more a-glitter than the coins within.

"I shall live like a queen -- for a month at least!" exclaims Délia.

"I want to buy carnelian beads for my beard," says Zarain. "I hear red is in this season."

"And I should simply like to live to enjoy any of it," says Nadilla. "Fortunately, I have found a hidden lever to unbar the way."

"Killjoy," mutters Kurg. The other two just look at their feet.

Nadilla pulls down the lever, and is rewarded with the screech of the heavy portcullis retracting into the ceiling at the passage's end. She can feel the clanking of the mechanism through the lever, but it cannot be heard above the din. Some enchantment indeed! Surprisingly nothing is attracted by the noise [1d6=4, no random encounter].

They drag the bodies of their fallen comrades back towards the entrance to the caves. Despite the amount of noise they make, not a creature comes to challenge them.

[I checked for a random encounter in each numbered area as usual. Since they were aware of the fire trap, I gave them a +2 saving throw bonus to avoid it. I made one more check when they left the dungeon: 1d6=1.

As they step out into the open air, they find the day has taken a turn. Angry clouds hang low in the sky, and a fierce wind whips across the beach, drawing sheets of sand along with it, and unsettling the ebbing tide. But there is scarcely a moment to catch one's breath, for coming out of the surf is a band of five blasphemous, hopping, semi-anthropoid, fish-frog abominations spawned in the deepest reaches of some briny abyss.

Each of the terrible beings holds a wickedly pointed trident. The latter pair are dragging a net, in which flops a small shark in its death agonies. They let go of the net halfway up the beach, as the band approach the anxious humans with palpable malice.

[Round 1]
Zarain makes the Secret Sign of Ngion-Lar, and speaks syllables of arcane import. Two of the advancing terrors are overcome, and lay down to sleep upon the sand [he cast Sleep. 1d6=3hd; one of the three made its saving throw].

But any triumph is short-lived. For Kurg is set upon by one of the Deep Ones. The furious creature powers through his parry, and buries the three points of its awful weapon in the barbarian's breast. It pulls the trident back with great force, and Kurg's life blood spurts out over the sand. He sinks to his knees, ever defiant, but death claims him in the end [4 damage dropped him to -1hp, dead].

Nadilla summons the unseen forces of the universe to manifest around her, bathing her hands again in crackling blue energy. But she suddenly cries out in anguish -- less for Kurg than for the barb which rips through her shoulder. The sorceress' left arm hangs limp and bloody as her foe gurgles with demonic glee [3 damage leaves her with 1hp].

Délia fares better, for though she cannot score a hit, neither does she receive one in return [7 vs. 9, both miss].

[Round 2]
Kurg's slayer advances upon Zarain, who e'en now has summoned his ghostly sabre. But weapons nor of steel nor of thought are proof against this cunning killer; Zarain is slashed across the face. It is a shallow wound, but painful [1 damage puts him at 3hp].

Délia smashes her axe into the side of her foe's head, but sadly with the flat of the blade. It staggers and almost falls, but comes at her again with renewed vigour [5 damage put it at 1hp].

Nadilla looses the mystical energy from her good arm. It plays over the Deep One from head to foot, and the creature sinks to the sand and breaks apart into smouldering halves [6 damage kills it].

[Rounds 3-4]
Nadilla rushes over to aid Délia, who is again at an impasse. Axe and trident clash over and over, neither striking true. But thus it is that the Deep One sees not the sorceress slinking up behind it. There is a flash of blue, and then the headless creature drops at the stunned warrior's feet [5 damage put it at -4hp].

Zarain is fighting like a Crimson Servitor of the dreaded Goddess of Slaughter. With each thrust his enemy retreats a few paces towards the sea. he strikes it once [3 damage], twice [5 damage], and it falls back lifeless, its guts spilling into the surf [-4hp].

One of the creatures wore a belt with a stolen money-purse, containing 21 golden coins [standard treasure is 1d6gp each]. Zarain takes it, though it is poor recompense for the loss of mighty Kurg. Délia puts his sword back in his dead hands, that he may take it with him to the Blessed Plains of Battle. Nadilla is taking pity on the shark and freeing it from the Deep One's net.

A group of fisherfolk has seen the battle from afar. They put in to shore to congratulate the heroes victorious, but are saddened to see that the number of the fallen is greater than that of the living. They mournfully offer to take the weary heroes and their slain comrades back to town.

[XP are earned for defeating monsters (in combat or otherwise) and may optionally be given for treasure recovered. I decided to use both rules as it obviates the need for story awards or awards for clever thinking and good roleplaying, which never quite seem appropriate in solo gaming.

I'll spare you the combat XP maths. The survivors earn 517xp each from combat, plus 273xp for treasure recovered, giving them a base of 790xp each. Délia's strength isn't high enough to grant her a bonus, but both of the sorcerers' Intelligence bonuses of +2 translate to a +20% award, so they each earn 948XP. At this rate, they'll need one or two more adventures to hit second level.

So what happens next? First, they paid for proper funerals for Kurg, Grûm, Fr. Melek, and Aeyrine. I decided suitable obsequies would cost 100gp/level of the fallen character. Lisette's body couldn't be recovered, so her cenotaph will cost half that.

They then intended to recruit some help and go back to the caves, and maybe see where that river goes. But they never made it. They were lured down a side street by a mysterious stranger, and before they knew it they were 1000s of leagues distant in the strange city of Cryptopolis.

I had been wanting to give Ruins of the Undercity an actual go, but I only had it in PDF. Anything with that many tables seemed like it would be much easier with a physical copy. Then I remembered that Kabuki Kaiser is actually French, so I looked on www.legrog.org and found out that there was indeed a French version: Les Catacombes de la Ville Morte.

Les Catacombes de la Ville Morte is entirely self-contained, so I didn't need my various usual solo aids (my random table Mythic / UNE / 1000 personality traits spreadsheet, the d30 Sandbox Companion, &c). I decided to play totally old-school, eschewing the computer entirely and taking all my game notes with pencil and paper. This was very freeing, and my PCs (those who survived) are all on the cusp of 5th level now. I was using a slim A5 notebook to write in, and have filled just over half of it, 50 pages or so.

The problem is I don't know when I'll get it all typed up. Or translated. 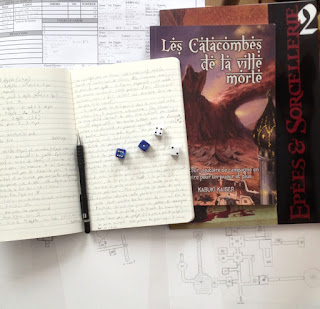