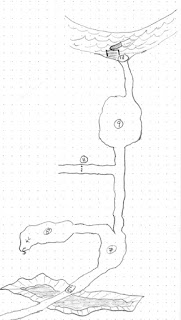 After a short way the passage opens up a bit  [Room 7 - empty] and forks. They take the left passage, which turns sharply to the west. It ends in a long, natural chamber with an uneven floor [Room 8 - treasure & trap].

Almost hidden amongst the jagged rocks lies a human skeleton, covered in mould and the tattered remains of clothing. None dare approach too near, lest it leap up to attack, but as they watch the unmoving bones they soon realise it isn't moving any time soon. And it appears to be yet holding something in its bony fingers -- a wand!

The wizards are both seized with desire for the mysterious object, but Zarain hesitates just a moment too long, for Nadilla rushes forth to claim it. She stops short, and peers carefully at the scene in order to determine what caused the wand owner's death. [There isn't a skill system as such, but all characters are able to attempt general adventuring tasks (climbing, sneaking, riding, &c.) by rolling 2d6 and applying an attribute modifier. Noticing the pressure plate under the skeleton is difficult, requiring a roll of 9+. Searching for traps is modified by Wisdom, so Nadilla rolls 2d6+1=6, a failure.]

She is sure that whatever killed this poor soul is long gone. But as she steps over the skeleton, a cloud of gas bursts up around her from beneath it. She snatches away the slender wooden wand -- a few skeletal fingers still attached -- and bounds off to the far wall of the chamber to steady herself, coughing and gasping for breath. She looks a bit green, but is soon well enough to stand on her own. [Poison gas trap: 1d6 damage, save for half. She rolled a natural 12, so took 1d6=4÷2=2 damage, putting her at 4hp].

She speaks a short charm, and reaches out to the wand with supernatural awareness, and the command word for summoning its magic impresses itself upon her mind: « méfu ». [In addition to allowing a wizard to read a scroll, the Read Magic spell also reveals the command word for magic items. Nadilla has found a Wand of Pyrotechnics (as the second level spell) with (1d6x10=)20 charges. Nadilla is from a Civilised culture, which gives her the Citadin (city-dweller) special ability. In addition to the +1 for social interactions, I assume it also means she understands verlan.]

As there are no further exits from this chamber, the party return to the last one and take the other fork of the passage. It goes for some way to the north. The corridor becomes progressively more damp, and the sound of rushing water comes from ahead. A passageway splits off to the west, but the party continue forward to investigate the water. Soon the passage open into a large chamber [Room 9 - encounter] wherein three gigantic toads are sitting. The slimy creatures are roused from their toadly reveries by the sight of the party's torches, and hop hungrily forward.

As 2nd level (2HD) creatures, they can each attack two 1HD characters. Neither side was surprised.]

The party fan out to meet the advance of the awful toads.

[Round 1]
Mighty Kurg fights alongside the sorceress, Nadilla. He delivers a powerful blow with his sword, nearly killing the slavering toad, but Nadilla's magic cannot seem to break its skin [Kurg hit for 4 damage, dropping it to 1hp].

Délia joins Zarain to fight the second toad. Their fortunes are the opposite of the first pair; her axe does not even scratch the toad's skin, but the wizard's phantom blade nearly disembowels it [Zarain did 7 damage, leaving it with 1hp].

Melek and Aeyrine are squared off against the largest of the three. They catch it between sabre and mace, but the wounds only serve to increase the creature's fury [4+2 damage drops it to 4hp].

Aeyrine's sabre swishes through the air, and she then must watch in horror as the toad clamps its jaws down on Melek, half swallowing him. The mace drops from his lifeless hands and skitters across the rocky ground [6 damage put him at -1hp].

[With two of the toads being killed, the last one needs to check morale: 2d6+1=9, it will fight on.]

[Round 3]
Délia rushes over to take the fallen priest's place. Aeyrine tries to avenge him, but the toad pounces upon her, and crushes the elf beneath its bulk [4 damage puts her at -1hp]. Its momentum drives it right into Délia, who smashes its snout in with her axe [6 damage drops it to -2hp].

Now they are but four. They scout ahead past the toad's lair [room 10 - special] to find that they have come to the bank of a swiftly flowing underground river. The churning waters send up  spray as they roar through the rocky, uneven channel.

On the bank is a boat with oars fixed firmly in metal sockets. It looks as it would easily hold [1d4x2=] six. But having lost half their number, the party are none too eager to hurtle into the unknown along the subterranean waters. They decide to make their retreat, and drag the bodies of their two fallen comrades after them.

There is still a side passage they have not yet tried, so they proceed down it. Perhaps, they reason, it might lead them safely past the flame chamber. It certainly isn't a case of just-one-more-room syndrome...

They have gone a few paces down the passage when an iron portcullis slams down behind them with a clang that echoes down the passage [area 11 - trap in corridor - falling portcullis]. Kurg goes back and tries to lift the gate, but stain as he might, he cannot force it back upwards, not even a hand's breadth. [He needed to roll a 12+ for this feat of strength; 2d6=6 +2(Str mod.) failed.]

"It is more than the weight of iron that keeps this gate lowered. There must be some enchantment," says Kurg, semi-convincingly.

"We must press on then," replies Zarain. Their dead comrades are left by the portcullis, and they continue down the corridor.
Posted by Alea iactanda est at 20:28