House Rules for LotFP Magic in the Early Modern Period 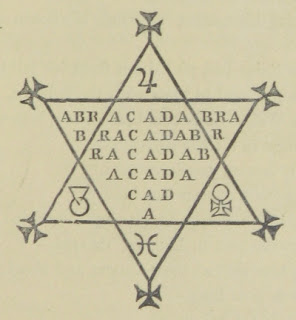 The study of magic as both art and science is the subject of countless treatises, both laudable and infamous. Wildly varying opinions on its use and origin -- whether it be truly Inspired of God or all a great Enticement of the Divell -- have caused both saints (Albertus Magnus) and sinners (Iohannes Faustus) alike to be viewed as great magicians.

For our purposes, O Viator, the distinction is of little importance. All magic has some commonalities, and it is the approach to its practice which needs must concern us.

The pious Cleric, then, must be contrasted with the profane Magic-User, for they both command the same forces. The cleric's path is that of Natural Magic, whereas the magic-user seeks to subvert the natural order by force of will. Both, in the end, call upon spirits and the occult forces in nature to work their spells, whether Thaumaturgical or Theurgical. 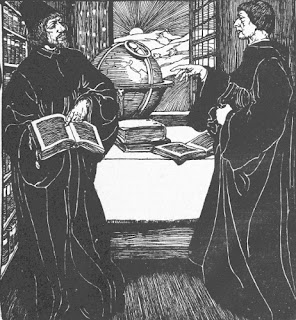 I like the distinction between clerics and magic-users, but I also want the magic in the game to seem more like actual early modern magic than just D&D. To wit, I've devised a few house rules. The intent was to make only minor adjustments so as to leave as much of the rulebook intact as possible. I've still erred on the side of more game-like than realistic, else transcribing spells would be measured in turns and casting in days.

First level cleric spells can function as written, and are "memorised" through prayer as in the book. For second level spells and higher, clerics will need a spellbook exactly as do magic-users.

Spellbooks are written in natural languages, though the writing may be hidden or obscured by various means: steganography, substitute alphabets, codes, enchantments, or simple bad handwriting. Read Magic is thus no longer needed (strike from the spell list), but Comprehend Languages may be.

Furthermore, clerics and magic-users may learn spells off each other's lists, but the spells will count as being one level higher. Thus, a cleric may learn and prepare Magic Missile as a second level spell from their spellbook, and a magic-user may learn and prepare Cure Light wounds as a second level spell from theirs (n.b. as a second level spell, it must be memorised through study, not prayer). The rules for spell casting can remain as is (though see Ritual Magic below), with the spell list from which the spell is taken determining the procedure. Thus, the Encumbrance restrictions for casting spells on the Magic-User list apply to Clerics casting them as well.

Clerics start with access to their whole first level list, but gain second level and higher spells exactly as do magic-users. Spells gained for "free" when gaining a character level must be rolled on one's own class list.

Clerics casting lots of magic-user spells -- or even just higher level cleric ones -- will most certainly run afoul of the Church authorities.

Note that these rules are meant to apply to PCs and NPCs using spells from the main rulebook. Magic discovered in mysterious tomes from other worlds can and should function differently.

Now, as to individual rules changes (page references to the Rules & Magic book)...

Spell Scrolls (p.80)
Scrolls are written in natural languages, so magic-users use the cleric rules. Additionally, magic-users and clerics can now use each other's scrolls interchangeably. Like a spellbook, the language of a scroll may be disguised with obscure alphabets or written in code, requiring a bit of decipherment (or a Comprehend Languages spell) to use.

The spell scroll is a D&D convention rather than a real-world one. The Greek magical papyri may look like the classical D&D scroll, but they are in fact spellbooks. In a campaign grounded more in the real world than a fantasy one, scrolls may not appear, or be very rare items. In their stead, I have created rules for Talismans.


Talismans ~new~
A Talisman, usually a scrap of parchment or small charm, may be enchanted with a one-use spell that affects the item's user (only). Use the rules for creating Spell Scrolls for time and cost. A parchment talisman requires the use of a library, others will require a laboratory. A non-spellcaster may use a talisman, but must make a saving throw vs. magic in order to "cast" the spell. If the save is failed, the magic simply does not activate, and a new attempt may be made on the next round.

Curse tablets may be made in the same way. The magic (specifically, the Bestow Curse spell) is released when the subject of the curse passes through a certain area wherein the tablet lies buried. Alternately, if a part of the victim (hair, nail clippings, blood, etc.) is affixed to a poppet or wax figure, the curse can be sent over a small distance (e.g. within the same city).

Transcribing Spells (p.80)
...from a Scroll to a Spellbook
This is not really possible, as only the end process will be visible, and much of the theory behind it will not be recorded. A spell scroll (or parchment talisman) will reduce the total research time to learn a new spell by Spell Level x 1d6 Days. This process uses up the magic of the scroll.

...from Spellbook to Spellbook
As written, provided the magic-user can read the language of the spellbook (Read Magic is no longer needed).

Alternately, you can hire a scholar to do the transcription for you. Roll time normally with no INT modifiers, and add the cost to the normal rate for a scholar shown on the retainers table. There is a 10% chance that an error or an idiosyncrasy of the transcriber will creep in, rendering a spell useless by the PC spellcaster. Check for each spell the first time it is cast.

Creating a Potion (p.81)
As written, though the magic-user will not necessarily need the help of a cleric.

Ritual casting ~new~
A spell may be cast as a ritual. Use the costs and times for Writing a Scroll as indicated in the rule book, but treat the spell as being one level lower (thus, a Magic-User casting a 3rd level cleric spell as a ritual treats it as a 3rd level spell).

Option: Ritual magic may even be attempted by non-spellcasters, though it is much less certain. They treat all spells as two levels higher, and have an effective caster level of half their actual level (round all fractions down, minimum level equivalent of one). They must also make a saving throw versus magic or the ritual simply fails and all preparations are wasted.

Time of Magical Activities (p.82)
Transcription and Research need not be completed all at once; however, each interruption adds 1 day per spell level to the time remaining. All other operations fail if interrupted.

Rolling for time taken: Intelligence modifiers are now applied to the die rolls BEFORE multiplying by spell levels, but all operations other than creating a staff or wand have a minimum of 1 day per spell level. Supplies must be purchased in advance (at the indicated costs). Running out will cause the operation to be interrupted. If more supplies are purchased than are needed, the excess can be used for the next research or enchanting procedure, but will only count as 1d100% of their purchased value  due to the differing requirements of each individual operation. Transcription from one book to another does not require a library, but neither can it be aided by the services of a hired scholar (all other rules for libraries, laboratories, and retainers are unchanged).

Option: Change the cost of transcription from book to book (only) to copper pieces. Even coloured ink isn't that expensive.

Libraries and Laboratories (p.83)
As written, but note that Clerics will need these now as well. 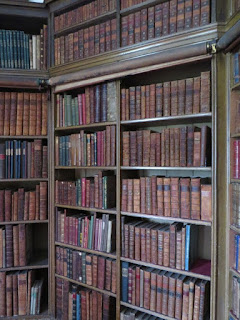