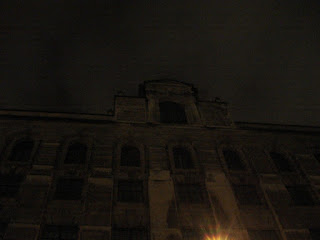 Setup: through the manor

The maid leads Éliane and Lalie out into the entrance hall, where candles still burn brightly. The rest of the manse is dark, and there are great shadows cast up the grand staircase. Éliane holds a dagger at the maid's back as they proceed.

Despite the late hour, servants are moving to and fro on their appointed tasks. There are four in the hall and on the landing above. Éliane quickly conceals her dagger in her sleeve. Lalie does her best to hide the poker behind her back.

"Be so good as to show us up to our rooms," says Éliane.

The servants all run off in (d4=) four different directions. Éliane and Lalie bolt for the front door. [1d4-1=] A  single houseboy interposes himself between them and freedom.

[Round 1 - he wins initiative]
He makes a grab for Lalie, but she wrenches her arm free [failed grapple attempt]. Éliane slashes him across the chest with her dagger [3 damage], and Lalie lays him low with a blow from the poker [2 more damage brings him to 0hp, unconscious].

They barely slacken their pace and erupt straight out through the front doors. Éliane bounds down the marble steps in one graceful leap, but Lalie slides through some red goo spreading over the porch -- the shredded remains of a human (?) corpse. She almost falls on her face, but windmilling her arms she regains her balance and keeps running [save vs. paralysis succeeded].

They rush out into darkness of the manor's park, where they hide behind some sculpted hedges to catch their breath and make a plan.

Suddenly there is a great crash as Philippe hurls himself through the window, having smashed through the shutters and wooden framed glass. He runs out screaming into the darkness. He is bleeding from numerous cuts to his hands and face [1d6=2damage total, 5hp left]. [d4-1=] Three servants clamber out the window in pursuit.

One of the maids catches up to Philippe and attempts to take him down [STR 13, d20+1=17, vs. Philippe's d20+0=11: grappled]. She jumps on his back and sends him sprawling into the grass. The other two servants are on him in a moment, and they kick him into unconsciousness.

His senseless form is dragged back into the house.

Setup: plan to get stuff back

"We need to get our treasures back," says Lalie. "They were so hard won."

"Agreed. And our weapons. Then we should get some horses and get out of this awful place."

"The maid said our things were brought upstairs. We'll have to climb in a window and then do a bit of sneaking round."

"And if we jump another servant to help us, we bind their hands this time. And maybe gag them."

"We should wait for things to settle first."

"OW!" exclaims Lalie. "Something fell from the tree and hit my head. Ewww. It's a frog. In my hair! Get it out!"

Then another three-legged frog-like creature falls from the sky with a wet plop. And another. And another. A shower of them is spit forth from the nauseated heavens, and soon the lawn is crawling with hopping, flopping, slimy, writhing, mutant frogs. Those that survive the fall begin to feast upon those that do not, biting them with decidedly un-batrachian fangs.

Éliane and Lalie make a run for the stables, sprinting away from the shower of awfulness.

They rush inside the half-open door into the empty stables.

"Shit! where are the horses?" exclaims Éliane.

"How will we ever get out of here?" responds Lalie.

"First we need our guns. Then I suppose we go on foot..."

"But there must be horses! We came in the wagon."

"Look there! the wagon cut across the grass. It left quite the ruts."

"Why would they take the wagon behind the house?"

Setup: sneak back in

The shower of blasphemous frog-things soon ceases. Beyond the lantern-light of the front porch, the ground is an amorphous, writhing mass of the grotesque creatures.

"So how do we get in?" asks Lalie, peering out the stable door.

"I think the front door is out," replies Éliane, "even if we didn't have to wade through those things to get to it. Anyway, I think going in a first floor window might be safest."

"I do so trust your expertise in these matters," says Lalie.

"Not the most direct route," says Éliane, "but I think I can get us in unannounced. Follow me."

Éliane sneaks up to the corner of the manor house, Lalie close behind her. Lalie ties the poker to her belt with a kerchief so she doesn't lose it as Éliane begins scaling a vine-laden trellis up towards the roof. "It's solid enough," she calls down, and Lalie begins climbing after her.

Once atop the roof, they look down at the grounds to see if anything unusual stands out. There is the edge of a forest some hundred yards behind the house. A strange glow is visible, diffuse and yellow in the mist between the trees. What its source might be, neither can say.

As they make their cautious way in the darkness, a soft light appears in the air before them, indistinct at first, but quickly resolving into the ghostly shape of a young woman.

"You must stop him!" says the spirit in a far-away voice, "He's mad! He thinks it will give him power but in truth it will only bring doom! For him, and for everyone!"

"I was to be the young bride of Comte Kelnor, who sacrificed me to dark powers on my wedding night."

"I see the gleam in your eyes, that hunger after treasure. I will tell you where there lies a treasure beyond price, but you must stop him! Else it will be your deaths. Even if you leave here with your lives, you'll live but a moment longer unless he be stopped!"

"Then help we must," says Éliane. "But show us to our rooms first. We need our weapons to stop this madness!"

And so saying, the ghost glides silently downward through a trap door into the house. Lalie and Éliane follow quickly behind, and descend into the darkness of the attic.
Posted by Alea iactanda est at 19:04