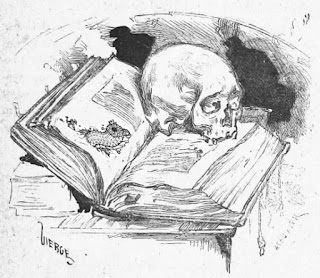 I've been working on my historical LotFP adventure again of late, but I still have nothing in any shape to post. The setting information is taking rather too long to put in a fit state for sharing, and my house rules for magic (second revision) are similarly proving hard to finish. And I haven't even started making my game notes into anything readable. So, in the interim, I thought I'd try another short and simple adventure chronicling the further exploits of my auxiliary PCs for the main campaign (their first adventure can be found here).

Here are their stats again for reference, in the format I'm using for the main campaign:


After some high living in Amiens (-750sp each), things turned sour, and our heroines decided to travel to Germany. In a coaching inn south of Nürnberg, they made the acquaintance of a mis-matched pair of wanderers (2 more PCs), who had come into the possession of an old treasure map.

Artuš Mlynář was a stout, young mercenary from Bohemia. After fighting for the Spanish in the failed siege of Nieuwpoort, he decided to abandon military life and seek his fortune elsewhere. Strange encounters with the living dead and vile witchery ensued, but at least he's his own master now. (Fun fact #1: Artuš is actually my (surviving) character from the solo adventure in the Grindhouse Edition LotFP tutorial book. After that he had a city adventure using Scarlet Heroes urban adventure tables (no fray dice or lowered damage). Fun fact #2: I named him without thinking too hard about it; when typing out his stats I realised his name translates to 'Arthur Miller'.)


His companion is a quiet spinster. Beate Schleiermacher is tall, rigid, and underweight, and her thinning grey hair and pinched face makes her look much older than her 39 years. She was the middle daughter of a prosperous merchant in Augsburg, and spent her days in happy seclusion in her father's private library, or studying history, philosophy, and mathematics with private tutors. Her father has recently died, and instead of a legacy left behind only debts. She fled the city in disgrace, taking with her what little she could carry (starting money 3d6x10=50sp), intending to throw herself on the mercy of a distant cousin in Nürnberg.


Artuš had just met Beate in the coaching inn the day before, as he recognised her as a woman of learning and he needed help deciphering the old map he'd acquired. The pair recognised Lalie and Éliane as being similarly-minded individuals the moment they walked in the door. The four have decided to become equal partners in the treasure-finding expedition. They almost even trust one another.

The morning after their meeting, they take a coach to Nürnberg where, after a first refusal, they manage to engage the services of a guide to help them navigate the wilderness.

I used the Hiring Retainers rules in the LotFP Rules & Magic book. The first guide refused to work with them (3d6+1 for Éliane's charisma=8, refuse offer), so they tried again, this time offering double normal wages (for a +2 bonus). Horst is an skilled hunter and tracker, and an affable enough sort, though rather unexceptional.

*His Loyalty will not be determined until necessary: 3d6+3 total bonus on the Loyalty/Morale chart.


Toolbox for the adventure
I don't even remember where Artuš got the map, but it was written on his character sheet. Whatever the case, it made a good adventure hook for a completely random adventure, rolled up with the d30 Sandbox Companion's adventure generator tables. In actual fact, the first set of results sparked an idea for the main campaign, which followed on from some vague notions I had hoped to explore, so I put it aside for later and rolled up a new one:


This is a simple exploration & location-based adventure, so I have dispensed with Scenes. I haven't had to consult the Oracle very often, but I've been using d10 and occasionally d8 as the Chaos Die. To start, I decided they would need to first travel 1d4=4 days to reach a small village on the edge of the forest they must explore. Each day needed a roll on the d30 Sandbox Companion's road encounter table (scattered density) and there was a 1-in-6 chance of nighttime encounters.

NB: Unless otherwise indicated, assume everyone is speaking in German. Lalie and Éliane speak their mother tongue in private, but find it rude to converse in front of their allies who may not understand it.

Enough with the preliminaries -- adventure awaits!

It's a brisk day as the band set out from Nürnberg. Lalie and Éliane have stowed their finery in their small travelling trunks to avoid notice, and wear the simple, rugged travelling clothes they've been in since their flight from France. Aside from Artuš and his obvious military bearing, they could pass for any common group of travellers.

The first day of travel is largely uneventful, but as evening approaches...

...a group of wretched-looking spearmen block their path on the road.

Éliane spurs her horse closer to the man, who must take a step back to keep his feet  from being stamped by its hooves. Her hands rest near her pistols, but she does not draw. She gazes down at him sternly for a few more moments before she speaks. "I think not. My Lady has urgent business in Jena."

"I doubt that very much," replies the captain a he recovers a bit of courage. "We don't wish to fight with you, we just want you to hear our proposition. The Graf is very generous toward his friends."

"I'm sure. But I would hazard to guess that he does not look kindly on his servants' trespasses, and would treat very unkindly indeed with the ones who would hinder My Lady, Madame Roquentin."

[I forgot to ask an important question at the start of the encounter. The answer is written into the narrative above, but the Event follows.
Q: Are the soldiers on horses? Likely (3+): O1 C1 - No, and... not well equipped
+Event:  New NPC - close / terror]

The captain hesitates, unsure of how to react to this new information. A second soldier steps up and asks, "Does your Lady's business take you further still than Jena?"

"Not that it's any of your business," says Éliane, "but it does, in fact, continue on from there."

"Allow me to accompany you then."

"What? says the captain in disbelief.

"I'd rather leave with them than go back... there."

[Q: How do the other soldiers react? doubt / world]

"You're a fool to run off with these... foreigners."

"I'm more afraid of what might happens if I stay. Aren't you?"

"Have we any choice?"

"Then I throw myself on this good lady's mercy. What say you?"

"We can use another guard," says Éliane.

As they continue down the road, the soldier, Waldemar by name, walks beside Éliane's horse. "So," she asks him, "why did you decide to throw in your lot with us?"

"The Graf is quite mad. I fear he is pressing people into his army for some unwholesome purpose."

"Well, we're glad of your company. But I fear I must confess: we're not exactly going directly to Jena. Or mayhap at all."

"It was just the first town up the road that came to mind."

"And where we are going, well, I just really couldn't say."

"Mon chère Waldemar, how do you feel about hunting for treasure?"

The next day they run across a troupe of players. The troupe is in high spirits, having just made more money than expected when passing through a small hamlet, and invite the party to share their midday repast. Some of the children had just been picking berries off the side of the road, and are anxious to share them with their new guests.

The party spend a welcome hour in the company of performers, and are treated to a free meal and a free show. One of the jugglers likes to tell tales, and relates the legend of a terrible witch or fairy-woman who lives in the woods outside of the aptly-named Drudenwiese, and is responsible for annual disappearances in the region. He cautions the party to not wend their way towards the accursed village. The other players laugh at him and tell him not to tell such preposterous stories, but he seems a little shaken in the telling of it, and insists it's true.

On the following day, settlements are few and far between. They meet not a living soul on the road, which is properly only a dirt trail. They do see a body lying beside it at one point [d30 road encounter], bloated past the point of recognition, its split skin oozing and undulating with the actions of maggots. They pass it quickly lest the noisome exhalations bear a pestilence with them, but sparing nary a thought for the poor soul called to his final reward. It's just the sort of unpleasant sight one expects on the roads now-a-days.