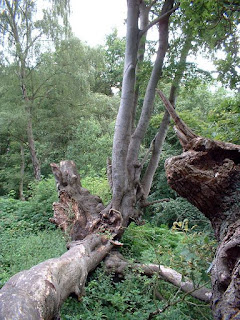 Beate and Lalie need to spend the day recuperating. To pass the time, Artuš and Horst try their hand at bow hunting. They come back in the evening with a brace of pheasants each, a most welcome respite from trail rations and hardtack. A fine feast is had by all, but alas! their jealous mule, seeking richer fare of his own, ingests a poisonous root, and is found dead the next morning.

I also rolled twice for random encounters since the party was split, with an encounter occurring at the camp: 1d6=2 bandits. The Scarlet Heroes encounter tables told me the bandits were "Trying to avoid a hunting local authority", "Disinclined to fight unless that seems necessary", and "At least one of them has half again normal hit dice" (so Ftr-0 and Ftr-1). They surprised the PCs, so I asked the Oracle:

Well, then... that was a lot of dice rolling to get to No Encounter. I kept this all in my notes, though, as there was a chance that it might make sense when interpreted in light of further encounters, and/or provide background for the region. It didn't, sadly, but that's just the vagaries of aleatory adventuring.]

Beate and Lalie still need rest. Artuš and Horst try hunting again, but retreat back to camp after barely half an hour as the skies open up and pelt the forest with rain [event: blinding rain]. The rest of the day is spent trying to avoid the water dripping into their tents.

Supplies are dwindling, so they decide to head back to Drudenwiese to re-supply. At one point a black bear stumbles across their path, but the beast is terribly injured and easily scared off with a pistol shot.

They slog for two more days through the forest. Intermittent rain showers keep the mud puddles formed by the storm two days ago from ever drying up. Near dusk on the second day they come across a hunters' camp half-mired in the muck. One of the three tents is intact, a second has collapsed under a fallen branch, a third has been uprooted and lies several yards from the rest. An old-fashioned broadsword is thrust into the ground by the remains of a firepit, with a hunting horn dangling on a cord looped round its hilt. Three bodies -- two men and a woman -- lie face down in the ground, caked with mud.

Artuš makes to cross himself, but his eye catches a faint glimmer on the woman's neck; he can just make out the clunky golden necklace she wears. "She'll not be needing such vanities where she's going," he says, pointing, and the others nod in agreement. "Best see if there's any more to be had."

But as they approach, the three corpses rise shakily to their feet, and lurch forward to attack. Their eyes stare fixedly, and their mouths hang slackly open. None make a sound, not even when run through with sharp steel. Waldemar drops one with his poleaxe, but then freezes in place, unsure of what he is witnessing. Horst runs to hide behind a tree as the others begin hacking the strange, silent foes to pieces. A fourth plods up behind Beate and grabs at her, dislocating her shoulder. She turns about to face it, and it smashes her in the face. She falls into the muck, unmoving. Artuš steps over her and removes the thing's head with a single sword stroke.

With all their foes vanquished, Éliane rushes to Beate's aid, pulling her face from the mud so she can breathe. "Don't touch her!" shouts Artuš.

"I must make sure our foes will not rise again," says Artuš flatly, and sets about the gory business of decapitating the other three.

Waldemar still stands clutching the haft of his weapon tightly, mouth agape, staring at the carnage before him. Horst dares not look out from behind his tree. Lalie helps Éliane move Beate to a patch of solid ground, and does her best to wipe the mud from the unconscious woman's face.

Artuš finishes his grim endeavour, and comes back to see Beate. "Well?" he asks, sword still in hand.

"We must watch her carefully," says Artuš, "and if she starts to look... unnatural in any way, we must destroy her at once. Before she wounds any one of us... and causes us to turn also."

He shudders at the recollection. Neither Lalie nor Éliane of know what change the mercenary speaks, but something in his voice convinces them to heed his warning, and not press for more information than is given.

The two women wait with Beate for over an hour as Artuš and Horst set up camp about half a mile away. Beate wakes with a concussion and can barely move her left arm, but it seems like there will be no permanent damage. Horst comes to fetch them, and the three take turns helping their barely conscious friend get to camp. Artuš insists she be given her own tent, and that the watches be positioned to see that she doesn't emerge in some awful state during the night.

Despite Artuš' wild words, Horst and Waldemar have already persuaded themselves that it had all just been a normal bandit ambush, and that the others put too much stock in fairy stories.

There is a momentary distraction from the paranoia when Artuš displays the glittering treasures he found in the mud: a heavy necklace of gilt copper beads [30sp], a plain gold fibula [70sp], a silver brooch set with lapis lazuli [80sp], and a very old (possibly Roman) silver belt buckle [80sp].

The fight took but three rounds, and only Beate took damage, though it put her at -1hp. These zombies won't cause her to change like the ones in the Tutorial book solo adventure, but Artuš doesn't know that.] 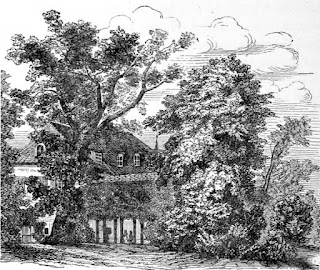 In the morning Lalie checks on Beate. She can barely move, but her colour is coming back. They build a litter for her and set off as soon as possible, arriving back in Drudenwiese a day and a half later. Beate gets bed rest at the inn, whilst the rest busy themselves with resupplying. Éliane makes discreet enquiries at the church, thinking that a priest might not be a bad idea to have along, but is informed that unless she wishes to renounce her Papist ways then she had ought not to set foot in the village church again.

[I followed the d30 Sandbox Companion for the attempt to recruit a cleric: -7 modifier meant none were even available.

Since they made it back to civilisation with treasure, I calculated XP -- not that I thought anyone would level up, but I am trying to get over my bad habit of letting bookkeeping slide for too long. As a hireling, Horst gets a 1/10th share of XP and as a henchman Waldemar gets 1/2.

Their new mule laden with provisions, they once again set out into the forest. Horst leads them along a slightly different route -- consciously or otherwise -- in order to avoid the scene of the horror in the mud [though still via hex 04.08].

That day they come across a group of rough-looking individuals, escorting a bruised and bloodied but otherwise indistinguishable man with his hands tied behind his back. Their voices had been heard from some way off, but their evident shock at seeing travellers in the forest causes them to stop short when the party come into view.

[encounter: 1d6=5 bandits
Purpose: escort an exile to the edge of their lands
Attitude: The usual, but they might parlay if that seems plausible
Condition: One of them is too badly injured to fight (the exile)
The bandits were surprised.]

Éliane calls out a greeting [reaction=8+1]. The leader returns the greeting, but makes no further overtures. Both groups continue on their own paths.

The bandits quickly finish their internal affair, and collect three more compatriots, intent on overtaking and ambushing the travellers.

The bandits squabble too much to mount an effective surprise attack, and the travellers turn to see them approaching from a distance. Artuš and Waldemar each ready a bow, Éliane draws her pistols, Lalie merely stands defiant with arms crossed.

"Come no closer!" shouts Éliane. "We do not take prisoners."

[Round 1]
The bandits do not respond, and instead [d6: 1-3 advance, 4-6 attack] advance slowly [move 30'] and begin to spread out. The party [who won initiative but waited to see what the bandits would do] take cover behind a fallen tree trunk, but keep an eye on the advancing foe [partial cover, +4AC]. Horst beats a hasty retreat with the mule.

[Round 2]
The bandits [attack 1-4 or advance 5-6] continue their advance, spreading further out in an attempt to flank the travellers.

[Round 3]
Éliane's pistol goes off with a loud report, but the ball does not meet its target [-4 range penalty]. Artuš and Waldemar each loose an arrow; two bandits fall bleeding into the dirt. Lalie screeches a hideous word in an unknown tongue. There is a bright ripple in the air from her outstretched fingers [Magic Missile], and the bandit arquebusier cries out sharply, his face burnt and shredded by an unseen force. The four remaining bandits flee in terror [2d6=10, failed Morale].

The fallen bandits have nothing of value save their weapons. A short and longbow are added to the mule's pack with some extra arrows. Artuš claims the matchlock arquebus for himself.

They make no fire that night, and double the watch, but all is quiet.

The next three days' travel is largely uneventful; some vermin get into the rations [event, -1day food] and they find a dark cave[hex 05.03] which they daren't approach, but those are the worst of the obstacles. When the ruins are at last sighted, they double back to make camp about a mile away. Again they double the guard and make no fire, lest they attract the bandits they've seen near the spring or risk drawing the attention of whoever -- or whatever -- may be lurking in the ruins. 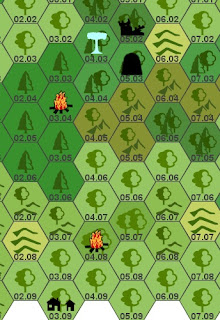