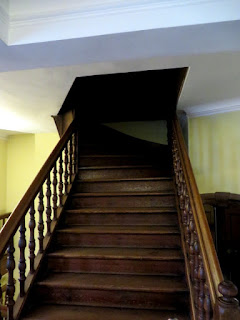 Judit draws her sword and starts up the steps. Pauwel follows behind with his halberd, then Anežka and Šimon, holding the lantern high. Anežka looks back and is surprised to find the man with the poker coming after them.

"I'll not have strangers running loose in my house amongst my valuables," he says. "You understand."

I'm not using a map, but they're just in a townhouse. The search proceeds from room to room in a sensible order. In each location, I rolled 1d6, with 1 indicating an encounter with the monster and a 6 indicating something else of interest to be rolled on the LL AEC tables.]

The party make their way up to the main floor, and start a cautious search from room-to-room. They find nothing untoward in the kitchen, nor the pantry, nor when they cross the long and richly-furnished dining room, nor the cozy salon beyond it. They then proceed up the steps, and enter a bedroom from the landing, where Anežka notices something amiss.

"Wait," whispers Anežka harshly. "What's that on the floor by the armoire?"

Šimon stand back against the wall, holding the lantern so Anežka can see to investigate.

"It looks like blood," she says, "dripping out from inside."

Judit and Pauwel ready their weapons as Anežka tugs on the armoire door. It swings open to reveal the body of a manservant shoved inside, soaked in blood from numerous wounds.

"How could such a creature open and close the door?" asks Marius.

Šimon puts a dagger in Marius' back. "Answer the question," he says.

"How do you think it got into our house? Knocked at the front door? Hah! That little maid needed to be taught a lesson... talking to that whore about things she'd overheard in our household. Now, I give you the option to join our cause... or I'll feed you to my pet."

"What cause?" says Judit. "What're you talking about?"

"Lay down your arms and we can discuss this rationally."

Šimon's answer is to drive his dagger between the man's ribs [damage is 1d4x2 for backstab skill; 6 damage drops Marius to -1hp]. He yelps in surprise, then doubles over and crashes to the floor.

I used my usual mish-mash of the No Salvation for Witches and Summon spell tables to generate the monster.

Rolling for surprise as the room goes silent... d6=5, no surprise] 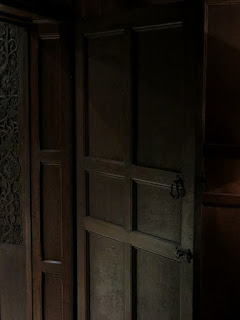 "What the h--" begins Anežka, but she is abruptly cut off. Her mouth still moves, but no sound comes out. Not a sound can be heard at all, not her angry question, nor the creak of the floorboards, the hiss of the lantern, nor the anxious beating of their hearts. And then the smell hits them, an overpowering faecal smell like an open cesspit on a sweltering summer's day.

The monster appears moments later, a squat and bulbous quadruped. The thing most resembles a skinned bear cub, with raw exposed muscle, but with no head to speak of, just a lumpy tumescence above the shoulders, from which four glassy black eyes stare out. Four spindly tendrils sprout from its back, dripping with bright yellow mucus.

[no surprise, initiative rolls are tied. It has Dex 3d6=15; so all attacks are simultaneous, save  Pauwel who goes last.]

[Round 1]
The thing whips its tendrils at [1d4=] Šimon, who is closest to the door. He ducks back away from it [it missed] and runs further into the room, out of reach. Anežka shoots her crossbow, but her hands are trembling so much so that the bolt hits the ceiling right above the doorframe [rolled a 4].

Judit thinks only of defending Šimon. She lunges at it with her rapier and cuts open some of its raw muscle. A brownish oily fluid seeps from the wound [2 damage].

Pauwel lowers his halberd and pokes at it from behind her, opening another leaking wound [1 more damage brings it to 16hp].

[Round 2]
It lumbers forward at Judit, and smacks her across the face with one of its tendrils. Her cheek swells and stings with the contact, and she shudders a bit as a feeling of nausea runs through her [she takes 1 damage, dropping to 6hp, but makes her saving throw against poison]. Judit's riposte puts out one of the beastie's staring eyes [4 damage]. Anežka throws her crossbow aside and comes at it with her dagger, stabbing down into its glistening shoulder [2 damage]. Pauwel hasn't much room to manoeuvre, but manages a credible chop at the creature, which tears open its back [7 more damage brings it to 3hp].

[Round 3]
Despite its wounds, the thing fights on [made its Morale check]. It catches Anežka's hand and wraps it in a tendril as she tries to stab it again. She jerks back her hand in agony as the mucus burns her skin [she missed; it hit for 1 damage, and she failed her save]. Judit and Pauwel take advantage of its struggle with Anežka and catch it between their steel [1+6 damage reduces it to -4hp, dead]. It sprawls on the ground oozing innards out the hole in its flank, and does not move again.

Anežka's face and hands start to swell. She looks round in fright, pleads --still silently-- for help. Her eyes roll wildly as she starts to fill out her dress oddly, and the fabric starts to split. She panics, running from room towards the stairs. Seconds later she collapses, expanding all the while, and rolls down the stairs into the entry hall.

Šimon and Pauwel are standing still in shock, but Judit has the presence of mind to search Marius' body.

"What is this?" asks Judit, as she holds up a square of parchment covered in sigilla and characteres, with a smattering of Greek writing.

Šimon makes sure Marius is dead, and tells Pauwel to do the same for the creature. He looks pale, but complies. Šimon takes the talisman from Judit, examines it with a frown, and pockets it for later study.

"We leave this Sheol."

They hear a stifled cry from below, and when they come out to the top of the stairs they find the young maidservant coming up towards them. She holds her arm gingerly, as it is bleeding from a deep cut. "Y--you're alive," she says. "They'll want to speak to you."

Judit points the end of her gory rapier at the girl. "Why should we--"

"They have your friend."

"This is not our problem," says Judit firmly.

"It's still mine," says Pauwel. "Don't you want to see this nightmare ended?"

"It could have far reaching consequences," offers Šimon. "It could come to hurt us all in time."

"Damn these goyim," mutters Judit. "What do they want, then?"

"Do they have more of those creatures?"

"I don't want to walk into another ambush. I'm afraid it's too late for Zuzka. We're getting out of here. You, girl, come with us. We'll keep you safe. We can come back later -- with reinforcements."

Zdeňka clings to Pauwel as her saviour, and looks up at him with her terrified, doe-like eyes. He absolutely falls for the young maid's helpless routine, and vows that he'll see her out safely, and come back to avenge poor Zuzka some other time. But what vile thoughts are going through her head as she leans softly into this big, strong, gullible soldier, I cannot now say. It is as if I too, O reader, were as entranced as he by this girl's youthful pulchritude and fraicheur.

Judit rolls her eyes at the sight of Pauwel and the maid, but holds her tongue. She leads the way down the steps as quietly as she can, lest the other inmates of the house hear movement and come to investigate. She is also afraid of what else the sounds might summon. The others follow behind, emulating her stealth as best they can.

At the bottom of the stair they find Anežka's swollen corpse, half covered in the rags of her dress. Judit steps round it and tries not to look, but must in order to make her way past, lest the straining skin burst at the slightest contact.

She leads them forward to the end of the entry hall, and stares for a few moments with incomprehension at the blank wall before her. "Hey," says Judit, "where'd the front door go?" 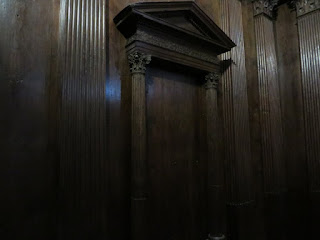