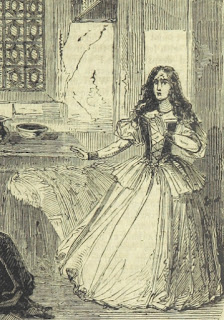 When Kateřina opened the door to the house, she could see nothing inside, nothing at all. Then she felt something wet wrapped suddenly round her wrist, and was jerked into the blackness. A moment of dizzy incomprehension followed, and then she found herself in a windowless room. At the far end was a sinister sort of candle-lit pagan altar, with a man cowering before it. But between her and the frightened man was the demon which had caught her.

The thing was a column of blood, as big around as a barrel and stretching floor to ceiling. It moved and squirmed and writhed, and with the semi-viscous mass of deep red fist-sized tubercles pulsed with light. All about the thing's trunk were mouths filled with blocky uneven teeth, which were ever floating to the surface, gnashing and spitting, then being once again subsumed. Wiry appendages hang down from the top of the beast. One of these has Kateřina held fast. She watches in revulsion as another reaches inside the beast, plucks out one of the glowing nodules, and thrusts it menacingly at her...

[* I didn't roll for and Interrupt/Alteration, as finding out what happens when she got pulled into the house was already going to be a series of die rolls.

In addition to the obvious, the room contains (according to Scarlet Heroes) an Encounter
(via d30 Sandbox Companion)=misc. npc, architect

The creature was Summoned by a 4th level NPC magic-user (who hasn't appeared yet), who had 'decided' to summon an entity of 1d6 HD.

I'd actually had a few months break (for Star Wars d6) between the time when Kateřina was pulled into the house and the continuation, so the suspense regarding her fate had really built up. When I finally rolled up the conditions of this scene, it looked worse that I had originally feared...

Kateřina twists and turns her arm in the thing's slimy grip, and with a strength born of abject terror manages to wrench it free. She scrambles into the corner, unsure of which way to run. [grappling- she rolled a natural 20 vs. its 6, so broke free. She'd also made a successful save vs. poison to avoid the special attack]

The dripping demon tries to snatch her up once again [rolls a natural 1], but merely slaps the wall above her head. The man by the altar watches wide-eyed, paralysed with fear.

[round 2]
There's only one exit in this room, and the horror stands between it and Kateřina. She leaps to her feet and dashes furiously past the gory monster. It grabs for her and tries to lurch into her path, but she dives beneath its grasping tendrils, flying out the door and slamming it behind her.

The room beyond is pitch black. Kateřina feels a momentary sensation of falling as she runs headlong through the blackness. Then she really is falling, having stumbled over something unseen. She lands on something more yielding than the wooden floor, which helps her break her fall. [save vs. paralysis or 1d4 damage; 14+2 dex, saved]

She tries to right herself, her hands scrambling for purchase against the slick, wet floor. She manages to sit up, and feels about for the thing before her lest she fall over it again. Too late does she realise that the sticky, sodden lump is a mangled human corpse [Pauwel]. She screams in spite of herself, and scuttles back from it, into the wall. She's still screaming, but realises the danger and claps her hands over her mouth. The taste of blood on oozing from her hands is a further shock, but she daren't uncover her mouth until she's forced herself to be calm, lest she make another sound.

She soon realises nothing has followed her, but doesn't want to linger should it decide to pursue. She crawls along the wall -- careful not to slip in the pool of blood crusting-over blood but resigned to moving through it -- until she comes to a doorway. She grabs onto the handle, uses it to pull herself to her feet, then opens the door and slips through. 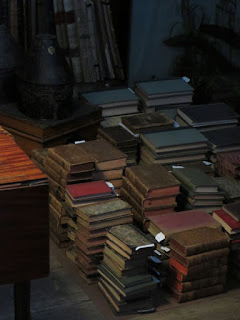 In a momentary dream-state, Kateřina's senses are filled with the ambrosial smells of her own library: dusty old bookshelves, old vellum, new parchment. Then the coppery odour of blood reasserts itself, and as her vision clears she finds herself in a stranger's study -- and she is not alone.

A grey-bearded man in scholar's dress is working behind an oversized writing desk, which is covered in tomes and scrolls, compasses, rulers, and various other brass instruments. He looks up from his lucubrations, seemingly unperturbed at Kateřina's gory appearance. He lays aside his style and addresses her in an even tone.

"Who are you?" asks the scholar.

"How did you get here?" he asks, a bit impatiently.

"I came to the door. Some... some thing pulled me inside. I ran into the darkness and... well, who are you?"

"Are you alone in the house?"

"I screamed and screamed. No one came."

"They won't have heard you. But they'll be here soon enough. I hope. They should not have started without me. Without all the proper tools, they invite disaster." [insane - idiocy - equipment]

"I don't understand! Please, tell me what's going on."

Result="Friendly, but not helpful. Will not help without a good reason such as money, a
strongly supported cause in common, etc., and even then only if there is no risk to the person you were attempting to persuade."]

The scholar considers her words for a few moments, then sighs. "Very well: they've begun the ritual to open the door."

"Ha ha! No, in fact. Or rather, it's both figurative, and very literal."

"No. And neither do they, if they've begun without all the preparations in place. The fools!" [knowing - discourse - last scene]

"And you're just sitting here, not trying to stop them?"

"Stop them? Once set in motion, it cannot be stopped."

"You begin to understand." 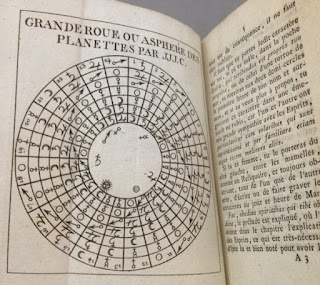 "Help yourself," he says.

Kateřina goes over to the desk to take one of many the candle holders, and her eyes alight on one of the papers covered in writing.

"Signum croceum!" she whispers, in spite of herself.

"That's not important. But I understand things... stranger than those in here."

"Perhaps you do. Perhaps you do. In light of this, I think you'd ought to stay. The others may have need of your knowledge." [scheming - plan - superiors]

"Why, avert our destruction."

"Let me keep this horoscope, and I'll stay."

[Persuasion: +1d4=3 : "Friendly. Will help if there is a reason to and the risks are minimal"]

"For whom are we waiting?" asks Kateřina.

"More than one of the Grollenbach siblings, I should hope. They can't all have been so rash as to--"

Just then the door opens...

...and two of the aforementioned siblings, Brutus and Cloelia, step through. They waver for a moment, then notice the stranger in their midst.

"Doctor Helvetius," says Cloelia, "who the devil is this?"

Kateřina turns round, and gives a short curtsey in spite of herself. "Kateřina Smutná. And you are?"

"Never mind that. Whose blood is that?"

"Explain yourself. Why are you here?" [UNE: inquisitive - petition - the character]

"I am here on behalf of my friend, Eufemia Švarcová."

"Oh. You're one of her lot. How disappointing." [UNE: prejudiced - discrimination - skills]

"My lady," interjects the astrologer, "be not so hasty to pass judgement. For Miss Smutná just now spoke to me of the Signum Croceum."

"She saw it written amongst my horoscopes, and it stopped her short."

"Well, that does put a different cast on the matter at hand." [UNE: prejudiced - difference - previous scene]

"As to that," says the astrologer, "just whose fault is this?"

"Whose do you think?"

"If she wants to help her friend," offers Brutus, "she'd be wise to help us. Isn't that enough?"

"Better than ties of family, it seems," snaps Cloelia. "Alright, Miss Smutná, if you help us stop our brother from ruining years of work, and possibly killing us all, it will also save your poor, pathetic Eufemia. For it is most certainly he that is the cause of her ills."

"Not exactly. But he's the only one of us who delights in such petty displays."

"I see, says Kateřina. "Then I should help you most willingly."

Cloelia doesn't wait for a response, but turns and heads out the door. Brutus is right behind her, followed by the astrologer, Dr. Helvetius. Kateřina grabs a lit candle from the desk and a few spares, then hurries after them.

[On my tracking sheet, I had already rolled that the NPCs were going to go from the study to d20=16, garret servants room. Rather than erasing and re-rolling, I just shifted Track C over to their column.]

The servants' room in the garret has an unplaceable, if not altogether unpleasant, smell. But as Kateřina's vision clears, the sight she beholds is one of renewed horror. On one of the beds lies an unconscious housemaid, with flecks of dried blood round her mouth and staining her night dress. Her breathing is shallow and uneven. A broken golden thread hangs from the ceiling between the beds, shining in the lamplight. Below it on the floor is some sort of fleshy sac oozing a viscous goo.

"Dammit!" exclaims Cloelia. "Who has done this? Now what are we going to do?"

"What is that?" asks Kateřina.

"That fool!" says the astrologer. "Does he intend to ignore all the preparations?"

"Can she be moved?" asks Dr. Helvetius.

"You do look more capable than either of those two," says Cloelia.

"--but you need to tell me what that thing is." continues Kateřina.

"It was keeping the maids quietly sleeping. Until they were needed. It was for their own good." [scheming - arrangement - community]

"You really are Eufemia's friend, aren't you? Soft and sentimental. If you want to help us you're going to have to display a bit more sang-froid."

"I said that I didn't like it. Not that I didn't understand. Perfectly. So do we drag her or try to pick her up between us somehow?" 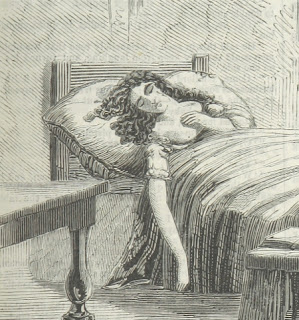