Other Dust solo - Part IX : To the Lighthouse 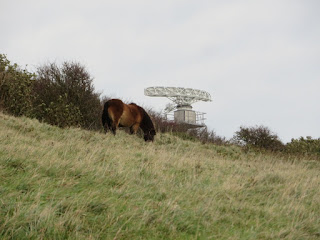 The next day, Ewa and Sandra are let out and their equipment (minus food) is returned. A warband leads them on a 45 minute trek up dusty old roads to a flat, paved area with a ruined building, not far from the edge of the white chalk cliffs. Past the building is an ancient wooden fence. "This is where we leave you," states the war leader. "Go through the stile and follow the path along the cliff top until you get to the installation. You can't miss their tower."

Once Sandra and Ewa have passed through the gate-- "Close it behind you!" shouts the war leader, pointing to the corroded, ancient sign. "Can't you lot read?"

Once Sandra and Ewa have passed through the gate and closed it behind them, they set off down the path. The war party hastens back to the safety of their castle.

After about half an hour of muddy, overgrown paths, they spot the tower, a tall, metal structure with a revolving radar dish on top. As they draw nearer to it, they come upon a herd of horses grazing on the hillside.

A unit of guards comes down the hill towards them. They are all clad in light blue, Old Terran armoured jumpsuits [equal to Harmony Armour, AC4] emblazoned with an ancient device on the chest, and carry laser weapons. The in-built helmets and large, red goggles give them a uniformly anonymous look.

"Surrender your weapons and come with us."

Ewa and Sandra have no choice but to comply with the command, but Ewa can swear she sees Sandra roll her eyes at the pronouncement. They are led under heavy guard up the hill to the installation, which presents an awesome sight to the eyes of the two wastelanders; the tower ever turns, lights blink and flash, and machinery hums. They see no signs of damage to the small complex's structure, ancient or otherwise.

"What is this place?" asks Ewa.

"It is Her Majesty's Coast Guard Station. And we are the Coast Guardians. Now wait here whilst I fetch the Officer on Watch."

The guardian disappears into a door in the side of the complex. Ewa and Sandra both crane their necks to snatch a brief glimpse inside the structure to know what wonders it may contain, but all they can really see is an exceptionally clean corridor. 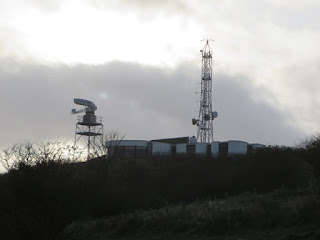 The Officer comes out, wearing a similar uniform distinguished only by a braided epaulette. He wastes no time in getting down to the briefing.

"There is an ancient lighthouse a ways down the cliff top. It is used as a guard tower for the small farming enclave nearby, as it overlooks their fields. They are a part of our protectorate here. We lost radio contact with them three days ago, so we need to send out a party to see if there is a real problem. There are bands of savage, cannibalistic mutants that live in the hills round here, and we've seen an increase in attacks lately. We fear that this may be part of the problem. Can either of you operate a radio?"

"I can probably figure it out," says Ewa. [Int/Postech skill total of +1]

"Good. Get it working if you can and make your report post haste. If not, come back in person. But don't travel after dark, whatever you do. And mind the perimeter fence around the lighthouse grounds. It should be electrified."

"I, uh, noticed you have a lot of gear," says Ewa. "I don't suppose you got any ammo I could have for my combat rifle?"

"Ammunition is in short supply, so we can't spare any. This is a reconnaissance mission, not a combat operation, so if you do your job right you won't need it. If the place is crawling with mutants, we don't expect you to go in -- just bring back an assessment of their numbers and situation."

"And this isn't a salvage mission. Don't stray, and don't go poking around anywhere you come across on the way. Avoid the old tunnels at Fan Bay... they lead straight down into hell."

"We'll do that, boss," says Sandra. "But you want to tell us why they sent us from the castle and didn't come themselves?"

"Because they're ruddy cowards, is why! Anyone at the castle who proves their mettle gets taken up here for training when the call comes. Only the select few have what it takes to keep this station running. We have a job to do here. It is our sacred duty." [scheming - negotiation - knowledge]

"None as need concern you, outsider."

Their weapons are returned, and they are on their way.

[The journey is handled by 1 encounter check (d6=6, no encounter), and 1 BOLD waylay: party - misunderstanding - proficient] 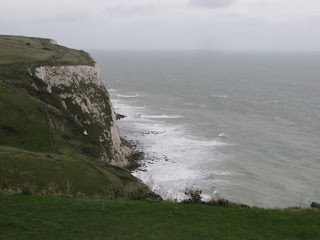 The dirt path continues in a meandering fashion along the cliff top. There are occasional branches, but only one obvious direction of travel. The fierce wind makes progress slower than expected. Some of the bushes are bent double under its force; in fact, they appear to have grown that way.

"So," screams Sandra to be heard above the wind, "you're good with technology, I take it?" [the waylay]

"Not really," yells Ewa in reply. "I just learnt a bit about postech when I used to go scavenging."

"So you, like, couldn't help us out getting into an installation...?"

"That really depends on what's keeping you out."

The footpath winds ever along the top of the cliff. Ewa and Sandra are careful not to get to close to the cliff edge. One good gust could send them over and into the rocky sea. After a while, the white tower of the lighthouse can be seen in the distance. Ewa and Sandra pause to look at it through Ewa's binoculars, but there is no movement, and nothing to see. 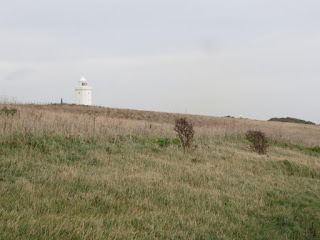 "Nothing -- and that's what worries me."

"We'll keep our eyes open then," says Ewa, "and make sure we don't miss anything."

They continue on their way, weapons held ready. They hear nothing but the roaring wind, and see no one in hills and waving fields of grass. Save for the lighthouse visible in the distance, they could be all alone in the world. At one point Ewa feels something crunch beneath her foot, but assumes it's just a branch; had she bothered to look, she would have seen that she'd just trod upon a human jawbone, with shreds of meat still attached [the failed Perception roll from above].

The perimeter fence encloses a wide area round the old lighthouse. Ewa and Sandra leave the path and clamber through the high grass to approach it. Sandra seems inordinately concerned that something is lurking in the clumps of large shrubbery situated here and there in the fields, but Ewa tells her she's just being paranoid; if there were danger about she'd know. 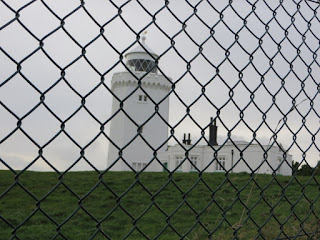 Ewa plucks a long, green stalk and tests the electric fence. "It's still live," she says.

"Better be careful how we get in," says Sandra.

Ewa ignores the repeated admonition and starts rummaging through her gear for some tools and wires, and less than a minute later has rendered a section of the fence inoperative. Sandra looks on as she works, but doesn't let herself trust in Ewa's handiwork until Ewa has climbed the fence and leapt over onto the other side. Sandra follows quickly after.

They walk once round the building, but see nothing out of the ordinary, save that the structure seems to have been well-maintained: a true rarity. There are a few shutters missing, and the ground floor windows have all been boarded up from within, but there is nothing unusual about either of these findings. Ewa tries the front door carefully, but it doesn't budge. She shrugs, then knocks loudly. "Hey! Anyone in there? We were send by the coast guardians to check up on you! Hello?"

"Who are you?" comes a hesitant voice through the door.

"How do I you're not raiders?"

"The coast guardian officer sent us. Said you've not contacted them on radio."

"OK. Guess you aren't raiders then if you know the radio's out. Go over to the tower. We'll lower a rope and you can climb up. Take too long to unbarricade the door."

The promised rope is thrown from the first floor window, and our heroines climb inside. They are greeted by a pair of men: a null-strain human of English descent and a mutant with mauve skin and a tree-trunk like head. 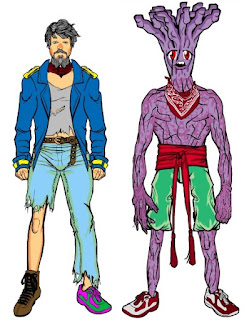 "It's just us who's left," says the human. "Matty up in the lookout tower didn't make it."

The mutant just looks dejectedly at the floor.

"Who're you, then?" continues the human.

"Our farm enclave nearby was overrun by ghouls. Usually only attack stragglers at night, but this time 'twas a whole wave of them. Fought our way here but they got in. We hid up the tower. In the morning, they were gone. Took all the bodies too. Place was well smashed up. Got the fence back online, but the radio's had it. Seen a few ghouls walking by day, checking us out maybe. But we boarded it up and they haven't broken back in. Been too afraid to go for help..."

"How many farmers were there?" asks Ewa.

"Not many. Maybe 50. Just enough to work the fields and send food to the Coast Guardians -- both here at the lighthouse and at their main facility. Sometimes they let us borrow their horses, and--"

"Sure we will. But we need to collect our things first." [the Event from above]

Nev and Mo clamber down the steps to the main building. Ewa sits back against a wall and closes her eyes, hoping to catch a little rest. Sandra looks out the window, scanning the countryside with a pair of binoculars.

About 45 minutes later, they hear heavy, plodding footsteps coming up the stairs. Nev and Mo appear half a minute later, panting and sweating beneath the heaps of gear each has collected. Ewa can barely suppress a laugh.

"We should still have time to get back," says Nev.

"With all that stuff? You're having a laugh! You can come back for it when this is settled. You'll slow us down."

The ensuing argument lasts almost 20 minutes. Ewa closes her eyes again and does her best to ignore it. In the end, Sandra cajoles them into leaving half their load behind -- though they can still barely walk at a normal pace [3/4 movement rate]. Ewa climbs halfway up the lighthouse and looks out the window, scanning the countryside with her binoculars. She can see no creatures moving about, though the wind blowing the long grass makes signs of movement rather more difficult to detect than she'd like.

Arms at the ready, they set out across the cliffs. 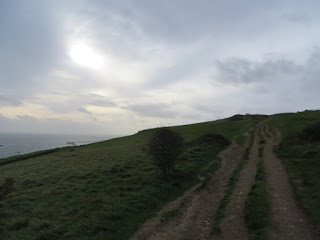