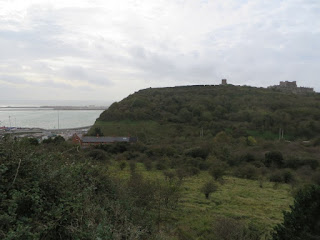 Ewa follows the road further, walking on the hills beside it. In the distance ahead, she espies a great, ancient castle. She peers at it through her binoculars, and sees people moving along the battlements. But beyond the castle to the south she sees an expanse of open water: the sea! the sea!

There are several adventure locations in Dover, and a lot more up the coast. I have vague ideas about what some of them will be like, and for others I have no opinion whatsoever. I'm not fleshing any of them out until Ewa comes directly into contact with them, and even then, only so far as is required for the current adventure. Partly this keeps things mysterious for me as a player, and partly it just means that set-up time is kept to a minimum and I get to actually play more.

Dover has the following areas: Dover Castle (enclave), Fortress Redoubt (rival enclave), the Port (mysteriously functional), and the cliffs, which contain the Coast Guard Station, Fan Bay Deep Shelter, and the South Foreland Lighthouse. Beyond that there are fields, wilderness, and the ruins of most of the city (a necropolis, as far as the encounter tables are concerned).

At this point it was necessary to figure out the Castle enclave. The random enclave generation tables gave me the following:

The castle should be able to support a much larger population (it's huge and in good repair, plus has WWII tunnels). But rather than re-rolling to get a better amount, I decided this would mean that they have recently suffered some terrible disaster.

I had given her (above) a Wisdom/Perception check at 6+ to notice signs of habitation; 9=success

Ewa continues cautiously along the road. In the distance she spots some tall, wooden guard towers flanking it. She disappears back into the weeds and scraggly forest, and decides to try getting closer undetected. She goes up and around through the hills, and pauses often to survey the area with her binoculars. She's not entirely certain that the watchtowers are even manned.

She continues her roundabout approach, and before long discovers another group of travellers lying in the tall grass at the crest of a hill, peering out at the terrain below. 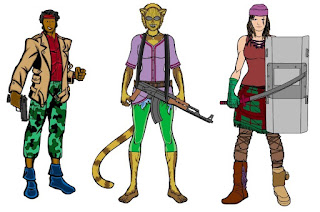 Two of the travellers are null-strain humans, a man and a woman, both in the prime of life. The third is a mutant, some sort of cat-woman with orange and black fur. All three are laden with equipment, a generous mix of recovered artefacts and post-collapse manufactured items. The cat woman turns to face Ewa, revealing her strange, metallic eyes. "Who's this, then?" she says, and the other two look over their shoulders.

"Get your head down, girl," says the human woman brusquely. "You don't want them to see you."

Ewa crouches low in the grass. "Uh, hi. I'm Ewa. I take it you're not from round here?"

"Hi, Ewa," says the woman. "I'm Sandra. This is Krish, and our feline friend is Niamh. And we most definitely aren't from round here."

"We came to see if the rumours were true," says Niamh the catwoman. "It's a working port alright. But why? What's it used for? And who owns it?"

"No, with these," says Ewa, holding up her binoculars. "I've got an extra set somewhere. They're a bit knackered but they'll do." 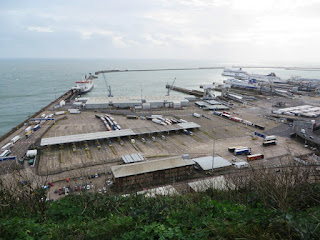 Ewa hands over the good pair of binoculars and rummages through her pack for the spare ones she found. They take turns, and get a thorough look at port. There are many heavy trucks arranged in rows awaiting loading on one of the docked ferries, but whatever cargo they contain is locked safely within their trailers. More are off to the sides in various states of repair, with open bonnets, missing doors and wheels, and occasional signs of damage or decay. At least some of the buildings seem to have power, but it can be hard to judge in daytime. Robot sentinels are posted throughout. Only once are humans seen; a small group of people in stained coveralls are led away from one of the less-damaged wrecks and into a building by a pair of armed and armoured robots.

"I don't know what's going on down there," says Sandra, "but it gives me the creeps."

"Everything gives you the creeps," says Niamh.

"So, Ewa," says Sandra, "you wanna stick with us? Maybe we can help each other out. Share any spoils, that sort of thing." [UNE: friendly - aid - the character]

"Uh, yeah, OK," says Ewa. "But maybe we should find somewhere safe to camp out for now. There's too much weirdness here."

[Ewa had made her Mental save against paranoia, so was free to agree with them. So, to flesh them out a bit--

I treated them as Wanderers off the encounter charts (random classes, level 1d4+2). Sandra is a 4th level Survivor. Both Krish and Niamh are 2nd level Scroungers.

I rolled on the NPC charts for group as a whole, so--
Big Problems for the NPC(s): Owes a powerful person a favour they can’t afford
Current Greatest Desire: Safety for themselves or an imperilled friend

Who do they owe? Battered ex-adventurer
Why? Release / Animals: they let [d6=]his livestock get loose
What do they owe? 1d6x100= 300 rations
Where is he based? hex north of 9

The four make their way back through the grassy hills towards the road out of the city. As they go, Ewa's new companions become quite talkative, explaining that they come from an inland enclave to the north, but that they accidentally crossed one of the prominent citizens by an accident that involved the loss of some of his herd animals, and they aren't allowed back until they can bring in enough salvage to compensate for the loss. Ewa responds by telling them of her Quest, and her adventures in the wilderness since leaving Eastbourne.

So engrossing is the tale that none of them notice the figures moving in the grass around them until they are completely surrounded by a war party with an assortment of well-made [TL2] firearms.

"Welcome to Dover, strangers. You had best hand over your weapons and come quietly. We don't want to hurt anybody. But you're trespassing on forbidden ground."

They hand over their arms and go quietly. The war party takes them down a twisty old road and up into the castle through the sheepoid pasture and inside the walls via one of the back gates. 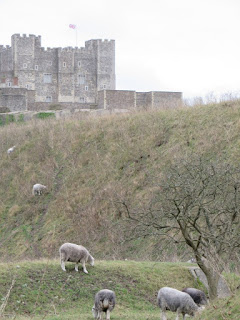 They see fewer people within than one would expect to occupy such a great and fortified structure. Even the guards seem stretched thin along the battlements. A sombre pall seems cast over the settlement.

The prisoners are marched into the castle proper and down into the dungeons, where they are put in a holding cell. Eventually a null-strain human official come to see them, with guards in tow. [1d6=] He is bald, and wears strange electronic goggles. His spotless white Old Terran lab coat gleams in stark contrast to his grubby woollen trousers and worn leather shoes. The guards close him in the cell with the prisoners, and he addresses them cordially.

"Normally we just relieve trespassers of their equipment and send them packing, or shoot them if there's trouble. But today is a special day, so we're going to make an exception. The CG station is requesting supernumerary manpower -- and that always means trouble. We can't spare anyone, so we're going to send two of you. The other two stay here as hostages. You could cut and run... but I don't think I need to sully this friendly chat with the rest of that sentence. It's not a long walk from here to there. We'll hear about it if you don't show -- they've got a radio and so do we."

"What if the two you send get killed?" asks Sandra.

"I'd rather like to think that they won't. Maybe you should choose the two least likely to die."

"That's between you and her. Why don't you talk it over amongst yourselves whilst you enjoy the bounty of our stores. It's stew night. I can't say much for the colour -- or the smell, come to think of it -- but it tastes a treat!"

The official is let out, and a guard brings in plates of stew and bread, a decent amount of water, and a half of beer each.

"So who goes and who stays?" asks Niamh.

"Well if this is how they treat their prisoners," says Krish, "I volunteer to be a hostage."

"I want to go," says Ewa. "I got all the way here from Eastbourne by myself. I don't want to get stuck here when I'm so close to the coast. Besides, I can't really taste the food anyway..."

"Because it would be wrong. Because you wanted to help me when we just met and I can use friends like that out here. Because if I didn't just abandon a bunch of clueless podborn to their fate, I'm not going to abandon you lot."

"You're a bit weird," says Sandra with a sigh, "but you seem genuine. Fine. But who gets to go with her?"

"You believe her?" asks Niamh.

"Call it a gut feeling."

Niamh and Sandra play rock-paper-scissors to decide; [1d2=] Sandra gets to go. 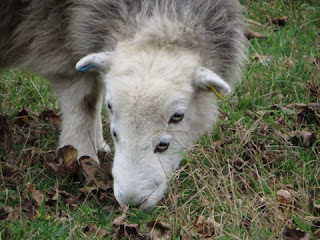