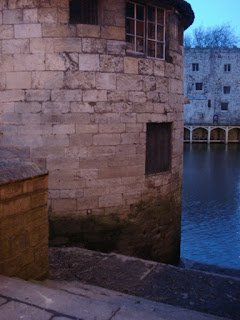 It's been ages since I've posted anything for my first LotFP campaign, but I found a bunch of mostly-edited notes, so...

With the close of the last adventure, Lycinia holes up for three weeks of uninterrupted spell research, learning (1d20=)Wizard Lock, her free spell for attaining 4th level. Manfred has lots of legal business in the city of Wandlebourne during this time, after which the recently-abdicated Earl and exiled elven princess intend to head off together in search of adventure.

But a party needs nore than just a fighter and an elf. You may remember Ruprecht and Thiery from Lycinia's strange side quest in Wandlebourne. I'd already planned on bringing them back for the next adventure, but we last saw them two-game months ago. What can they have gotten up to in that time? It's back to the Midkemia Press Cities catch-up tables to find out. I'm going to try using them as written without any deviations just to see what happens; if either of them die they'll be replaced with a new by-the-book 3rd level character of the same class. I hope they'll at least make 2nd level, though. They each have 7 weeks of catch up to do, not including the end of the week in which they went on their Dangerous Mission with Lycinia. Manfred also gets 3 weeks of events of his own. Lycinia is sequestered Terentius Holzfäller's study the whole time, and so doesn't get any catch-up table rolls.

Not that it makes much difference, but week 2 is the last week of winter, with spring starting in week 3.

Week 0
After his dangerous mission, Thiery has nothing to do but pay his cost of living:
80sp for lavish room & board, 15sp for clothes maintenance.

Week 1
Event: He is accused of a crime! One of his enemies (he never finds out which) accused him of acquiring his new-found wealth through elicit means. He's hauled before the magistrate, and it looks like the odds are against him (-11% conviction on the conviction roll for all the people he's Offended, and an additional -15% for being a plebian). [1d%=]50-26=Convicted. The magistrate sentences him to 1d8+2= 4 weeks in gaol. However, he's got money, and that makes a difference; he can bail himself out for 100sp/week of sentence. He will still have the gaol term on record, but may walk free. Our hero snidely counts out 8 gold coins (400sp) right then and there. This has been an expensive week; 95sp room&board and maintenance costs are paid out on top of it all.
+25xp (which he wouldn't have gotten if he'd gone to prison)

Week 2
No events this week. He goes out gambling with 200sp, but only manages to break even. He treats himself to a few nights on the town as a reward for dealing with the courts (=level 6 Companionship) totalling 300sp, and pays the usual 95sp for lifestyle maintenance.
+25xp

Week 3
event: And now he offends yet another townsperson, earning an additional -1% penalty to avoid another conviction. The dice are unkind to him, both the real-world and the in-game ones; he gambles with 400sp, and loses double his stake! He's learnt his lesson about not getting nearly murdered, but still may have some work to do on the not being an arse front. He makes another show of paying his debt in gold, coin by coin (16gp). 95sp more go to living expenses, but he's not really hurting for money at all.
+25xp

Week 4
Event: This week he Helped an Aristocrat -- probably with a loan at the gambling table to avoid the threat of impending violence. The aristocrat has connections, and offers a minor title in recompense.  He is now Sir Thiery, and you can be certain that he shall always introduce himself thus from now on. I even wrote the 'Sir' on his character sheet. He gambles 250sp this week and loses it all; I will interpret this as not an actual loss at the table but rather as the loan mentioned above, which he'll never actually see repaid, no matter how adamant his new friend was that he will honour the debt. 95sp maintenance.
+25xp

Week 6
Event: He is given chance to invest. This being Wandlebourne, the investment is probably in a shipping concern. And this being Thiery -- exuse me, SIR Thiery -- the offer probably comes from one of his gambling 'friends'. He invests 2000sp, hoping that it will do well, not really caring if he loses it all. He gets to roll on the investment chart with neither bonus nor penalty; the investment will realise a 5% return next week (10sp). He gambles an additional 200sp the traditional way, and breaks even. -95sp expenses.
+25xp

Now on to Ruprecht:

Week 0
After completing a dangerous mission, he needs to roll to keep his job (as a charcoal burner). By some miracle he makes the roll (there was only 15% chance as it's a plebeian job).  He saves no money this week, but at least the roof over his head and the food is all free. He doesn't know what to do with all the gold he's just earned, so finds places to hide it whilst he ponders his situation.
+25xp

Week 2
Event: He has an opportunity to enlist in military, and decides that going back to soldiering has to be better than burning charcoal all day for a pittance. As he's technically a deserter, he claims to be from Cheapington (it's near enough to Badger's Glen where he grew up). He is given enlisted rank and will earn 10sp/week, of which he manages to save 75% (7sp, 5cp) this week.
+25xp

Week 3
Event: He befriends a townsperson. This gives a +1% to avoid conviction rolls, cancelling his old penalty. He only saves 1sp this week, but goes out gambling with an even 100 and wins 50sp on top.
+25sp

Week 4
Event: He befriends an Aristocrat, who has a proposition (there was a list of options to choose from). She has a Dangerous Mission in mind which should pay well (1d6x normal). She needs him to guard a ship (via the random mission tables at the back) and can offer [1d20 [3] x 1d6 [2] x 100=] 600sp, to of course be paid in gold. Whether or not he accepts, he also gets a +10% bonus to avoid conviction. The pay could be better, but it's still tempting, and as he can get a week off from the army he accepts. He spends a few sleepless nights aboard a ship in the harbour, mace in hand, ready to repel a malefactor or malefactors unknown. Perhaps he should have declined... he's all alone with no one to back him up if there's a problem. Last time he had two helpers along... (I rolled 1d6 to determine his chances, and got a 6 which gives him a flat 60% chance of death... but I rolled a 00!) Perhaps the mere presence of a guard has scared off these unseen murderers, or perhaps they simply had something better to do. After three uneventful nights aboard ship he collects his 12gp. But as I'm doing this by the book, he gets full XP: 1d20x100= 1400xp. He spends a modest 12sp on modest companionship (level 3; he avoids the 5% chance of falling ill) and goes back to the barracks.

Week 5
Despite trying to maintain a low profile (INT 13 makes him eligible for the -20% modifier), an event still befalls him this week. And what an event! For he receives a marriage proposal. The woman in question is of plebeian background and has no dowry to speak of. He's not really ready to settle down, and so politely declines.
no savings this week, but +25xp

Week 6
Trying to lay low isn't helping. A friend (fellow soldier) of his offends their employer (captain). Ruprecht is not going to get involved, which results in his erstwhile friend becoming Offended (-1% conviction penalty) against him.
no savings again. +25xp

Week 7
Ruprecht has either offended the gods, or else is the least streetwise person in Wandlebourne. For the third time now thieves steal his money. This time he's a bit more fortunate than usual, as they only make off with (1d100=) 3% of his money: 36sp and 2cp.
no savings to offset the loss, +25xp

Ruprecht has earned a total of 1575xp for his 7-week catch up; it's enough to make him 2nd level (total xp: 2030). The lucky bastard rolls the maximum (8) for his hit point increase (which means next time he'll roll a  1, with my/his luck).

Week 5
In all the to-ing and fro-ing between Terentius' townhouse and the courts, Manfred manages to befriend an aristocrat who feels pity at Manfred's plight and bequeaths him a present of 400sp to help finance his 'mission' to reclaim the castle. He's got no actual expenses at the moment as he's living under his benefactor's roof, and certainly isn't going to risk gambling away the remains of his fortune.
+25xp

Week 6
Manfred is offered a chance to invest, but really can't afford to right now.
+25xp

And Lycinia's stats for completeness:

And so everyone is caught up and ready for the next adventure, which begins as an old acquaintence of Manfred's comes into Wandlebourne looking for him, and presents him with an interesting proposition... 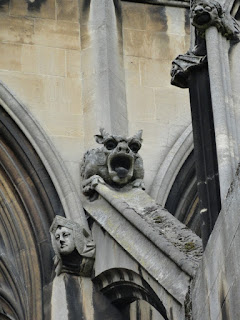