"You were recommended to me," says the portly merchant, casting a quick glance over his shoulder, "by a mutual acquaintance, who said you're... not afraid of dangerous pursuits, and are looking for something to spice up your quiet life in Wandlebourne. I don't think we should talk about it here; too many prying ears in this place. But let me assure you it's nothing too questionable: just something that will require a good bit of discretion. And I'm willing to pay handsomely for your services."

"I've got two others coming too.. We'll meet in an out-of-the way tavern near the warehouse district in 3 days. I've written the name on this slip of parchment." 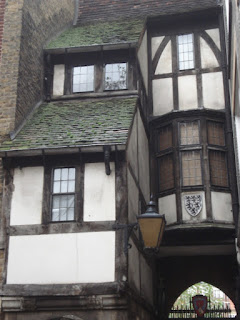 [Randomly generating the mission using the appendix at the back of Cities produced: Capture Employer's Relative. It will pay (1d20x100 = 1500sp) 30 gold coins each.

I've never used the 7-scene Adventure before, so this seemed a good time to try it out. I'll still be answering questions via Mythic, but the Chaos will stay at 5.]

The Leaf & Badger is a workmans' tavern where the shipbuilders convene to drown their sorrows in cheap ale [Cities: Level 2 tavern, townspersons - artisan types]. The drinks are notoriously week, but at the end of the day the house specialty, rabbit in wine-currant sauce, makes up for it [d30 Sandbox Companion, for reputation & specialties].

It's been below freezing all day and looks to be bitterly cold again this night. Lycinia arrives, wrapped in her long, hooded travelling cloak and muttering a prayer to the elven gods that this merchant has secured a table by the hearth.

He hasn't quite, preferring the shadowy far corner, but the roaring fire and densely-packed bodies filling the clamorous tavern provide an ample tonic to the winter's chill. With the merchant sit two other men.

The first is a small, lithe man in ostentatious finery. His many rings and silk tunic and fur-lined cloak all seem to have been purchased just yesterday. Nor does the flashy rapier at his belt shows any sing of wear. "I am Thiery," says he, waving his hand as cavalierly as you like, "known as the Prince of Thieves." Lycinia notes his slight lisp, and the incongruity of his missing front teeth -- or maybe it's not so incongruous. She could imagine wanting to hit this guy herself.

The second man merely nods and introduces himself curtly as Ruprecht. His tatty leather armour and dented iron mace tell the opposite story from the well-dressed man's opulence. He looks like he'd be useful in a fight, though he does seem a little malnourished.

"I'm Lycinia," says Lycinia as the other two size her up. Their poker-faces are good enough that she can't tell what they think of her.

"Good, we're all here," says the merchant. "help yourself to some wine and we'll get started. I take it none of you have heard of the noble House of Foulche -- there's no reason you should have done. We are an old but minor family of unlanded nobles. My nephew Ugues, the current Baron Foulche has been kidnapped. He is being held prisoner in Wandlebourne, in the townhouse of the Reverend Lady Isbal Étice, a priestess of Light and rather successful cloth merchant. What she wants with him I cannot say, but her behaviour has been becoming steadily more erratic this last twelvemonth. Ugues is a dissipated creature and a bit useless, but he is family. I fear for his life as the good lady's captive."

[Die rolls that figured all that out, in order:

I used the random city creation tables (in Cities) to pick a location: Wealthy Quarter, residence

The house is owned by a random NPC: aristocrat (1d6=f), one of the powerful merchants of Wandlebourne. she's also a Cleric, Level 1d8 if encountered.

The three agree readily to the merchant's very generous terms, and arrange a meeting elsewhere the following night, with their gear and ready for action.

Lycinia fortunately has had the afternoon and night off, and made it out of the house without Emmeline or her father being any the wiser.

The party meets at a vaguely respectable tavern [level 3 - townspersons: artisans & priests] in the Merchant Quarter, fairly near to the wealthy neighbourhood where the Reverend Lady Étice lives. They are all wearing heavy cowled cloaks, though as it's bitterly cold and snowing out, this does not make them at all conspicuous. Ruprecht is wearing exactly the same ensemble as the night before. The "Prince of Thieves" is wearing much less flashy accessories than he had been. Lycinia has left her sword at home; if no one sees it, nor gets a good look at her face, she reasons, she will most likely be mistaken for a human woman. Brysinadd has already offered to be her alibi should things go wrong (for it was indeed she that recommended Lycinia for the job). They each down a mug of mulled wine as proof against the cold, and then set out into the dark streets of the quarter.

[Q: Are the PCs being watched/followed? Unlikely: 65, No.

There will be a random encounter roll every time the PCs move into or within a neighbourhood. The first one (Merchants' Quarter) comes up with a Workgang: PCs are forced to detour around a street that is closed off for repairs. This would have been interesting in other circumstances, but they've not even a time limit at this stage.]

In the wealthy quarter, the midnight streets are empty [no encounter]; the snow keeping everyone indoors.

The Reverend Lady Étice's townhouse is comprised of [1d3+1=] three storeys. There are two small balconies outside the first floor windows. Lights are visible within on the ground floor, behind the closed shutters. The townhouse is flanked by others, so there is no way round the back, and only a single front door [all via Mythic questions before I went and got a map].

Lycinia thinks they should reconnoitre, and plan a way in. The other two vote [1-3 agree, 4-6 go in now] to go in at once. Lycinia acquiesces; she can always turn invisible and escape if things go poorly.

Lycinia and Ruprecht keep watch down opposite sides of the street whilst Thiery scales the wall to the left-hand balcony (he doesn't want to risk making noise with his grappling hook). [Thiery has 2 in 6 Climb skill. It's barely a 10' climb, so he'll only take falling damage if he rolls a 6. Each try after the first will require another random encounter check. He makes the second roll, and the encounter check comes up nil.]

Thiery ties his rope to the iron railing, and the others follow him up [no roll needed with rope]. Thiery hides the rope in a planter so it is not easily visible from street.

Thiery slides a long thin bar (as new as the rest of his things, note his companions with a feeling akin to dread) under the window and unfastens the latch. 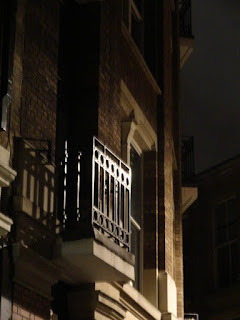 Exceptional Yes on such a question will indicate more than one occupant. And from here on in, anyone in a dark room will be assumed to be asleep, and the PCs will Surprise them on a roll of 1-4, and thus not wake them up.]

This is obviously a bedroom for one of the house's more important residents. Whoever it is, they are fast asleep in the large bed, and though they stir a bit and pull the blankets more tightly about themselves when the cold draught sweeps into the room, they don't wake up as the three invaders climb carefully inside off the balcony and close the shutters gently behind them.

A faint light comes from underneath the bedroom door.

"We should interrogate the sleeper," Lycinia whispers.

"Are you mad?" asks Thiery.

"No, she's right," says Ruprecht. "Otherwise we're just bumbling around in the dark."

"Don't worry," says Lycinia, "I can make sure she goes back to sleep with my magic."

Reassured by the elf's words, Thiery goes to wake her quietly, with his hand over her mouth, and a dagger at her throat.

The woman awakes with a start. She's middle-aged, with long, greying hair and -- at the moment -- terrified and staring eyes.

"Who are you?" rasps Thiery.

She failed morale check on an 11; Her Reaction roll is 6, Neutral.]

"Don't hurt me!" she pleads quietly as Thiery uncovers her mouth.

"Do you know where the Baron is?"

"He's being kept upstairs, in the room above this one."

"This was just a bad dream," says Lycinia. "Sleep now."

The elven magic takes hold of the frightened woman who slips back into a deep slumber.

[I rolled a random room on the map (a nonsensical result would have indicated a basement cell or the like). When the PC's reach the indicated room, I will roll on my rumours Truth table at -2, with the proviso that 'Mostly True' is good enough for her to have been honest.]

Opening the door, the trio creep out into the hall. It is lit by a single wall sconce, whose candle has burnt down to nearly nothing. The light shows brightly underneath the door to their left, but the opposite door seems dark.

Thiery opens the door a little, and can just make out the shape of another sleeper in the bedchamber. As the party slink inside, the sleeper sits up abruptly and calls out, "Who's there?"

Lycinia pads up to him quickly, dagger in hand. She puts her finger to her lips. The man does not move.

"What do you want?" whispers the young man. "And who are you?"

"We're here for the baron," says Lycinia. "We won't hurt you if you cooperate."

"You want the baron? Take him. Just leave me out of it. I'm tired of Mme. Étice and her schemes."

"She's planning to use the baron in some plot to discredit the Church in Wandlebourne, which she thinks will gain support for the schismatics. Look, I don't really care a toss about any of this. I just want to leave this place."

"Why can't you?" asks the elf, intrigued.

[UNE is good at answering Why: insane-confusion-rewards]

"I'm absolutely skint, her Ladyship is nuts, and no one here ever knows when, or if, they're getting paid next. I'm pretty much stuck."

"If you can help us," says Lycinia, "we might be able to get you out of here. I've got 10 gold coins on me. More than enough for your travelling expenses."

"That's... that's enough to get back to Aylesbyrig and the guild. They'd have to accept my petition. I'm a wizard, you see. Or at least, will be some day. Look, as much as I want out of here, I'm honestly not sure about you lot. How's this for a deal: you come back through here when you have the baron, and then I'll leave with you. But if you're caught I was asleep the whole time; I don't her ladyship to curse me with her... however it is she works her magic."

"The baron's still upstairs, I think, in the room above the one opposite this. Go out that door, up the stairs, through the big hall doorway then through the antechamber to the bedroom. There's probably a guard there, so be careful."

Since the party Asked an NPC with a reaction roll of 10+, I get to roll one of the truth dice now for each rumour; baron's location 3, guards present, 2. The PCs will plan accordingly; even if he's wrong, there's got to be something dangerous around here.

And it was totally random, but both rumours about the baron's location point to the same room. The map is limited, and the PCs are definitely heading straight there, so it's time to put my DM hat on. So, rolling on the truth table-- 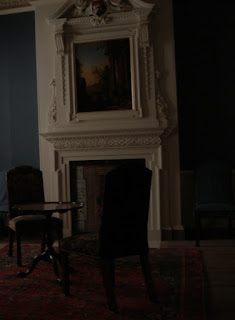