Thiery opens the door a crack and peeks into the next room as the young wizard lies back down in his bed.

The hall and staircase are well lit, but empty. Thiery motions for his companions to follow. At the top of the stairs, the empty hall is lit by a single taper. The light coming from underneath the antechamber door is very bright.

"We've no choice," says Lycinia, "Thiery, open the door as quietly as you can. If there any guards, I'll put them to sleep."

"A trivial task for the Prince of Thieves," says Thiery. Ruprecht rolls his eyes and readies his mace.

Inside the antechamber there is a loaded crossbow on a table next to a deck of cards and an abandoned game of solitaire, but no guard to be seen. The door to the bedroom is ajar. The room is much colder than the rest of the house. Lycinia tiptoes slowly forward, followed by her compatriots.

[The pair of Partly True rumour results are interpreted thus: the baron/guard should be there, but isn't right now.]

Inside the bedroom, a man in leather armour and wearing a shortsword at his belt is standing before the great, four poster bed. He is holding up one end of the plush duvet to reveal a humanoid figure beneath, made of pillows and assorted bits of clothing. A sharp chill comes in through the wide open window.

[The guard is Surprised, the PCs are not.]

Lycinia goes up behind the guard, and holds her dagger at his throat. "Where's the baron?" she hisses.

[The guard's Morale is 7; he fails his morale check.]

The guard goes rigid, afraid to even let go of the bedding. "I don't know," he responds. "He sneaked out!"

"Could we discuss this with the window closed, please?" asks the guard. "I'll tell you everything I know. Just don't hurt me!"

Lycinia takes the man's shortsword from its scabbard as Ruprecht shrugs and closes the window. The guard sits down on the bed, doing his best to avoid the gaze of his captors.

"The baron was always going on about this tavern he really liked, the Mermaid & Rose. He said they got these real fancy courtesans there. An' he was always going on about how they must miss him, since he hasn't been there in so so long. He was layin' it on pretty thick... I think he's been sneaking out this whole time. What I don't get is, why he'd keep coming back to this madhouse."

The party quickly confer about the best course of action following this revelation, and decide to look for the baron at the Mermaid & Rose. Lycinia offers the guard 2 gold coins if he'll precede them down the stairs and signal if the coast is clear.

Q: Any encounters on the way out? Unlikely: 93, Exceptional no: no more encounters whilst the PCs are in the house.)

The guard readily agrees. They follow him back down the stairs. The door to the wizard's room is slightly ajar. As Thiery pushes it open, the light from the hall falls over the bed, and reveals a grisly sight: the wizard lies murdered in his bed, a shortsword buried up to the hilt in his chest.

[Guard fails another morale roll] The guard is terrified by the gory scene and begs to come with the party and escape. Lycinia assents, and gives him back his sword along with the promised gold. They sneak back through the house to the sleeper's room, and get out the window without incident.

The guard runs off alone into the night as they set off to find the Mermaid & Rose. 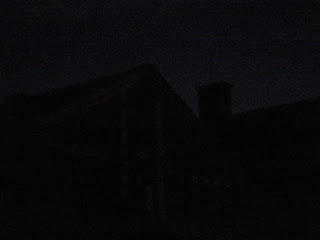 Ruprecht thinks he knows of the place. It's [Tavern is Level 1d6=6] far too classy for such as he, but this only makes him more anxious to actually get a peek inside. Should he be allowed inside, that is.

[The tavern is in the same quarter of the city as the Reverend Lady's townhouse, down a side street. Since they've never been, trying to find it will require 1d3=2 encounter checks. The first came up as no encounter, the second was with a patrol of the town watch. I rolled a 12 for their reaction. The entire encounter consists in the watch walking past and their sergeant calling out, "Have a nice night, citizens!"]

The Mermaid & Rose has an impressive façade, done up in a mélange of exotic foreign styles. Two great brass braziers flank the entrance, roaring with flame. Two enormous armoured men stand at attention between the braziers, their halberds crossed to bar the entrance. They take one look at the trio approaching them, and instantly move the weapons aside. "Come right in, gentlefolk," they exclaim.

[Reaction roll = 11; Thiery is there in all his finery, Lycinia is an elf, and Ruprect must obviously be their bodyguard. This place has a somewhat louche reputation, so patrons arriving up in dark, concealing cloaks is almost de rigeur.

The tavern is filled with revellers whose purses are filled with gold. You can theoretically pay for things with silver here, but no one who's anyone would be caught dead so doing. The kitchen serves fare that the King himself dreams of some day tasting. There are bottles of wine in the cellar older than the city. All the élite vices are on offer, as well as a host of esoteric pleasures for the true connoisseur. Thiery thinks he's in heaven. Lycinia feels she's in hell, Ruprecht is just trying not to laugh.

Looking round the labyrinth of opulence that passes for a common room, there is no sign of the baron. There are a few people who might be he, but as none of the party have ever met him...

Thiery decides to take the direct approach. He walks up to a group of young rakes standing about, watching one of their number slowly pouring out draughts of a syrupy red liquid. [reaction roll = 4] "I say, my good ma--"

Ruprect drags Thiery bodily away before the rakes go for their swords. The two watch as Lycinia goes over to a pretty waitress and whispers something in her ear. [reaction = 10] The waitress laughs and says something, then Lycinia comes back smiling. "He's upstairs," she says, "in something called the Ixitxachitl Room." 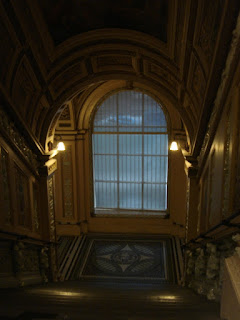 At the top of the stairs is a single long corridor spanning the length of the building. There are 10 widely-spaced doors, five on either side. Each door is covered in plates of beaten gold, each bearing a scene in low relief, depicting the most terrible monsters of the deep: kuo-toa, sahuagin, kraken, aboleth... and finally, the demonolotrous manta-rays known as ixitxachitl.

Ruprecht pushes the door open, and he and his compatriots slip inside. The party is somewhat disappointed to note that the monster theme does not extend to the room's décor. The baron and his belle-de-nuit are caught, non iamiam in flagrante delicto, saltem vere in delicto inflagraturo.

[The occupants of the chamber are, needless to say, Surprised.]

A chorus of "eeeewwwwww"s alerts the amorous couple that they are no longer alone. The young lady swiftly covers herself with a sheet and assumes an air of false modesty. The baron covers his midsection with a pillow, in very real embarrassment.

"Would you mind telling me," says the baron, pulling up his trousers, "just what in the Nine Hells you're doing here?"

"Your uncle sent us to rescue you," says Thiery.

"Do I look like I'm in need of rescue? I'm only a 'prisoner' of Lady Étice because I let her think I am. I can't believe uncle Denys ordered a rescue mission. I had almost figured out the whole of the good Lady's evil plan so I could inform the King!" [via UNE: mysterious - misdirection - enemy]

"What is her plan?" asks Lycinia.

"Look," say Ruprecht, "you had probably better come with us to see your uncle."

"I'm busy. And when I'm finished with my business here I'm going right back to my 'cell', so why don't you all just run along and tell my uncle I have everything under control."

"No," says Ruprecht, hefting his mace, "we really think you ought to come with us now."

Thiery throws his cloak aside to expose the rapier at his belt. Lycinia merely glares. [The barons morale is only 7; 2d6=10, failed his ML check.]

The baron petulantly finishes dressing, and wraps himself in his cloak.

The party lead the baron back through the cold night to their employer's townhouse. A servant has been waiting up just in case, and admits them to the warm parlour before running up to fetch his master.

The merchant is pleased to see the success of their mission, and asks for details. They tell him everything: sneaking in, the disloyal secretary, the wizard and his murder, the guard who helped them in exchange for his freedom. Baron Ugues insists that there was no danger, and that it was all going to plan.

[What does the merchant say? UNE: predjudiced - discrimination - flaws]

His uncle will hear none of his nephew's explanations. He gives the baron a right bollocking for everything from his lifestyle to his nonsensical 'plan'. After a few minutes of constant invective, he notices that this family affair is making his guests rather fidgety. He produces three purses full of gold, and thanks each of the party in turn as he hands them over. The servant shows them to the door, and they part ways.

The PCs earn 30gp (=1500sp) each. They also get XP. But how much. The award of 1d20x100xp for a dangerous mission according to the Cities book seems likely to provide too many XP for a single night's work. However, awarding XP by the LotFP book (for encounters and treasure, but not payment) goes too far the other way:

That's a bit shabby for an an adventure that totals c. 4100 words of write-ups. Rather than come up with some sort of alternate exploration-based system, I'm just going to don my DM hat once again and say it feels like about 350xp worth of adventure. Since I'm probably being stingy, I'll let them keep the extra 30xp from encounters. So,

Neither of them gain a level. They'd better do something if they want to keep adventuring with Lycinia, who will certainly be 4th level by the next time she sees them (they aren't in the next adventure, which isn't finished but has already run 34, admittedly short, Mythic scenes).

Lycinia has earned a handful of XP for knocking around the catch-up tables and a brief encounter with a wild boar, plus the adventure makes 150+50+380= 580xp since departing Feyalldra. She's still about 1200xp shy of 4th level.

She has a 40% chance to keep her job after the mission - she rolls a 37. Terentius is a bit concerned to hear that she came back home an hour before dawn, but he doesn't say anything at this time. 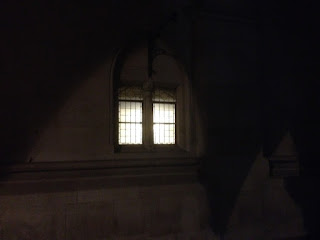