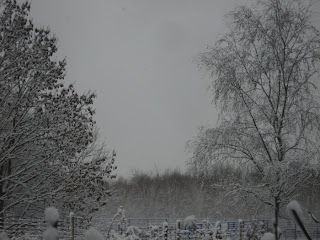 It begins to snow, getting heavier and heavier as the day wears on but at least the wind is only moderate. Lycinia nearly loses the road once or twice, but never strays far from her course. She sees almost no one along the way. A wild boar once crosses her path, and looks as if it might be trouble [reaction=4, hostile], but she puts it to sleep with her magic and continues on her way. She just manages to reach Cheapington by nightfall [being lightly encumbered, she needs to make a forced march to get there].

Cheapington is as dismal as ever. There is a festival for the souls of the departed [d30 Sandbox event: religious, death (solemn)] casting a particularly oppressive atmosphere over the town, and the local merchants all seem beset by their own petty rivalries on top of it. At least there's a room free at the inn [all Mythic questions].

Lycinia is drinking alone in the common room of the inn when she is startled out of her reveries by a high-pitched, croaking voice behind her, which calls out in low elvish, "Tis good to see a friendly face! These humans are all so suspicious."

She wheels about on the bar stool to see a goblin: small and twisted, green-skinned, and with a curved dagger thrust through his belt like a sword. The hideous sprite is smiling up at her, an expression which could curdle milk and give nightmares to the tender-hearted, but one that Lycinia, as another of the fairy folk, reads as simple good cheer.

[Q: What does the goblin want? Activity / Elements
Q: What is goblin's longer-term goal? Negligence / Weapons]

Lycinia and the goblin spend the evening in pleasant conversation. The goblin has been out exploring the world, but, like Théscine, his adventures have taken their toll. He is headed back to his home in the Goblin Forest via Feyalldra, and intends to retire and hang his sword above his mantel [Negligence / Weapons], as a reminder of the things he's seen. He does suggest that the only fun to be had in Cheapington would be a nice snowball fight [Activity / Elements], but Lycinia is exhausted from travel (and emotionally drained), so politely declines.

The next morning the goblin announces that he must ride for Feyalldra today, before the snow gets any deeper; it's scarcely stopped all night long. He does reiterate his request, however, and Lycinia decides to indulge his fae fancies. As they lob snow missiles at one another from across the town square, their antics attract a good deal of notice, and soon they are joined by about a dozen of the town's children, and a fair few apprentices as well. The town priests eventually put a stop to the hijinx, as unbefitting this time of solemnity. The children and apprentices stomp back inside, the goblin bids Lycinia farewell and rides off on his timber wolf, and the elf goes back to the inn to look for the end of another bottle. 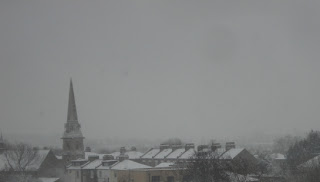 The following day the snow falls even more heavily, and the wind starts to pick up. Lycinia alternates between siting by the fire and buying supplies for her journey.

That evening there is a great commotion in the common room as a group of five men come out of the snow. Their leader is a man of about thirty, dark-haired, with an olive complexion, and piercing eyes. He strides immediately up to the innkeeper and slams a handful of gold coins down on the counter. "My men and I require your best rooms," he thunders, "if someone has them already, you'll just have to turn 'em out."

"But-- but, m'lord," stammers the innkeeper, "one of them is taken by-- by that elf over there." He points, then adds, in a stage whisper, "She's a princess."

"Damnable precedence!" sneers the young man, "Fine, she can stay put. But I'll have the rest, or your head, do you hear? And then see about some food for us. We've ridden long through the snow and had hoped to find a warmer welcome than this!"

The staff of the inn all buzz around the angry man and his followers with a chorus of "yes m'lord, no m'lord"; it's obvious they all know and fear him. After he and his men have gotten settled in and finished their meal, he detaches himself from their table to investigate the elf.

He strides over to where the heavy-lidded Lycinia is sitting behind a forest of empty bottles. He looks her up and down, then, "I am Manfred," says he, "Earl of Vuldois."

"Enchanté. Forgive me for not introducing myself sooner," he says, "but my men and I have ridden hard from Ullgrim this day, and by the innkeeper's surprise at seeing us I surmise the messenger I sent ahead never made it. I should have sent a better rider! But, if I may ask, what brings you to Cheapington? It's not often you elves have business here when the merchants are away for the winter."

"Ummm," replies Lycinia,"I sort of got kicked out of the forest. I'm just passing through."

"Really? What could you possibly have done to be exiled from fair Feyalldra?"

"Very well, I shan't pry. And I shall thank you not to enquire too closely into my own reasons for stopping over in this... fine village."

Lycinia and Manfred engage in small talk for a few more minutes, covering such breathtaking topics as the weather, the state of the roads, whether the red wine here tastes less like vinegar than the white. At the first possible instant, he makes his apologies and rejoins his associates. Lycinia has the impression that Manfred is more used to talking at women than to them, but as she wants to avoid a fight and suspects they're all going to be stuck here for a few days, she doesn't cause a scene.

Sometime in the night, the blizzard hits in earnest. Wind howls, trees are uprooted, and several buildings in Cheapington are damaged. No one leaves the inn for the next two days entire. On the first day [day 116], out of boredom, Lycinia tries to strike up a conversation with Manfred again.

"Since I need somewhere to go," she begins, "I wonder if you could tell me what the situation is in the kingdom? Last I heard, there was a war brewing, and the church was falling apart..."

[Lycinia has decided Ask an NPC. Since Manfred's reaction was not 10+, the truth of this will have to wait until she is actually confronted with evidence or meets someone in charge. So, to determine what he tells her--
Rumour Quality: 1d6= 2, Major
Magnitude: 2d6=9, benefit or difficulty: ±2
What is the rumour about (Mythic): Negligence / Status quo; one of the factions isn't paying attention and is losing ground every day to their opponents. There are 4 factions: 2 secular (Baron Forzdeleu vs. Count d'Estancbel) and 2 religious (orthodoxy vs. schismatics), so...
Faction: 1d4=orthodoxy]

"The church needs new leadership," says Manfred, "and those idiots who simper around the Reverend Father de Val d'Oine and his cronies are too stubborn to realise it. And they're so convinced that being 'right', as they see it, will carry the day that they don't notice how many are going over to de Molleré's cause."

[The rest of this episode was determined by some Mythic questions to see what happens for the 48 hours that people are trapped inside the inn. I was very nearly going to gloss over the entire Cheapington episode in favour of more interesting doings in Wandlebourne, but at the last minute I decided not to. The goblin episode is good for a bit of world-building, and possibly a returning NPC down the line. The introduction of Manfred is being retained because because he and Lycinia are destined to cross paths again; I've played well ahead of this point, and the Cheapington narrative has definitely been shaped a bit by his return. None of the events were changed from how they played out, just given a bit more colour and detail. In fact, I hadn't even managed to name him until after he came back. There are benefits to not typing everything up immediately! Manfred's stats (so far) for reference:

Now, on to the questions:

Q: Do things get uncomfortable with everyone stuck indoors? Unlikely: 29, Yes.
Q: How? Mistrust / Food - Manfred thinks someone's trying to poison him?

As the blizzard rages without, and Manfred within, the inns guests spend more and more time avoiding the common room. Lycinia is relieved not to be drawn too far into the madness. She does, however, take to sleeping with bed pushed against door. 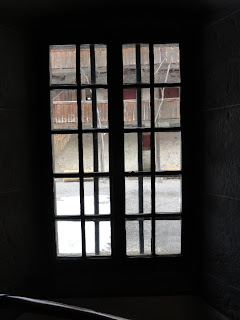 At long last, after a final night of terrific gales, the morning comes, calm, serene and bright. Even the birds are singing. Lycinia gathers her things, pays the innkeeper and merchants (142sp total - including the riding horse) and rides south towards Wandlebourne with all possible speed.
Posted by Alea iactanda est at 20:55