LotFP Solo - Part the Fifty-Ninth: "With me the conquest and the labour share" 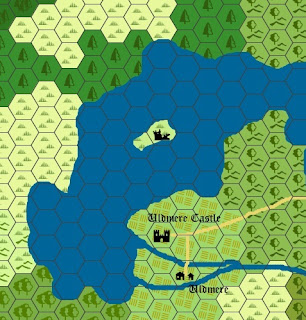 The next morning the party break camp early and continue riding along the shore of Lake Ild towards Uldmere. The day is cold, as spring refuses to blossom, and a heavy mist hangs over the water. Brichtrethe insists on leading the way, her lance held high as befits a knight. Oswold follows her dumbly. Thiery talks incessantly at whoever will listen, though in the end this is mostly Ruprecht, who's too either too polite or too resigned to tell him to shut up. Manfred and Lycinia lag behind a little, and fall to talking amongst themselves.

"I don't think much of your friends," says Manfred.

"Nor I of yours," Lycinia replies.

"Brichtrethe is a hard woman, I'll own. But we go way back... and I may owe her my life, you understand."

"We served in the King's army together... it must be ten years ago now. She's always taken being a soldier very seriously. And the Light God works his miracles through her, so she's a bit convinced of her rightness in all things. But for all that, I trust her implicitly."

"But she doesn't seem to like you. Or anyone."

"Oh, she likes me well enough. I'm probably accounted one of her best friends. She just disapproves... of everything."

"Not that I blame her where dullard the soldier and Sir I-bought-myself-a-title are concerned."

"Why ever did you bring them along?"

"Who else do I know? I've worked with them before on a... a job that got weird really fast. They neither of them balked at what we needed to do, acted with perfect courage and discretion, and they kept their wits about them."

"We'll see. But if Thiery -- excuse me, SIR Thiery -- doesn't mind his manners soon, I'm going to knock the rest of his teeth out." 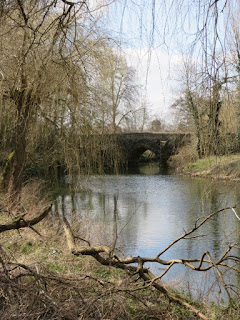 The journey continues with no real incidents. In the afternoon [random encounter (forest), reaction=10] they come upon a boar happily foraging in the forest. It ignores them completely to concentrate on its task. Manfred thinks it might be rooting out truffles, and refuses to ride on. Brichtrethe takes one of Thiery's pistols and fires into the air to scare the beast away. Manfred sulks the rest of the way to Uldmere.

[Q: Does the party receive a good reception in Uldmere? 16-8=No, but... the peasants are too afraid to start any trouble. (reset surge)
Q: How's the siege? Abandon / Riches = costly
Q: Can Brichtrethe talk to the commander? 60, Yes. Surge +2

Uldmere is a fairly large town whose citizenry are a mix of famers and fisherfolk. Foodstuffs from Uldmere are traded throughout the kingdom, and especially in Ildmarch, whose merchants take an active interest in the fortunes of the town which feeds them. Even the wizard's guild has a presence here; the twinned gargoyles above the entrance to the town hall were given to the town by the guild to aid the mayor in times of strife -- though some say they are also there as the guild's eyes and ears.

The siege of Uldmere Castle has not been allowed to spill over into the town, which has declared itself neutral (obviously at the insistence of Ildmarch mercantile concerns), yet the streets and public houses are choked with the King's soldiers, and discipline away from the actual siege has been notoriously lax. The only thing the peasants of Uldmere hate more than the unruly soldiers are groups of armed strangers. 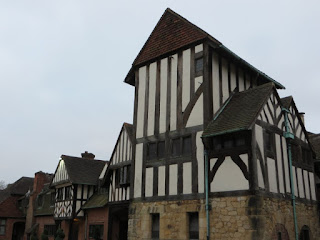 Brichtrethe insists that the party ride through to the besieging army's camp, and for once there is no dissention. Once there, she requests an audience with the general, which upon presentation of her orders to the aide-de-camp is swiftly granted.

The general has little to say, and little time to spare. The siege is eating into the King's coffers, disrupting the kingdom, and making no progress. She looks cursorily over the scroll authorising Brichtrethe's mission and hands it back. "This is a noble mission you've undertaken, Dame Brichtrethe," says the general, "and very worthy of a knight of your holy order. But -- you'll forgive me -- I'm a practical woman, and I can't sit back and hope that this mythic banner will inspire my troops to suddenly take the castle. They're more mercenaries than mystics, you understand, and I wouldn't bet on them knowing nor caring much for ancient legends. That said, my aide will find you food and a place to stay, and even arrange passage out to the island. You rode here? I'm going to need to borrow your horses until you return. And I do, most fervently, hope you return. I've heard bad things about that island. There was terrible magic used there once. They say it echoes there still, and that no one who goes there ever comes back. Not whole, at least. I hope you can prove them wrong." [UNE: mysterious-whispers-power]

The party is given a place to pitch their tents on the outskirts of the camp, practically in Uldmere. Manfred balks at seeing their horses led away, but in the end agrees that ferrying them over to the island would be more of a hassle than it's worth. Ruprecht is worried that someone will recognise him as a deserter, though he gives no voice to the sentiment. He pleads fatigue from the journey, and goes to sleep early so he may hide in the tent.

[night encounter: 1 bandit; reaction=8
Q: Are only some of the PCs present for the encounter? 33-2=No, surge +4
Q: What does (1d6=f) she want? Deceive / Competition - instead of a bandit, she's rather a spy (specialist level 1d6 if it comes up) for de Molleré's faction.]

Most of the other soldiers ignore the newcomers, but one young soldier asks if this is indeed the unit of Dame Brichtrethe, and if so might she have a few words with the great knight.

"I've heard talk in the camp that you'd come on here on your quest. The banner of St. Orvein. How exciting! You must really have been noticed by the upper ranks to be given such a wonderful mission -- oh, 'mission' sounds like it's just another day in the King's army. This is a quest, just like in all the old stories. And I can say I met you someday!" [UNE: friendly-delight-superiors]

Brichtrethe thinks the girl is completely overstating things, and has been secretly fearing all along that this mission was only given to her to get her out of the way. But, she reasons, she has been doing well of late, and may indeed come to the attention of the upper echelons for completing her task. 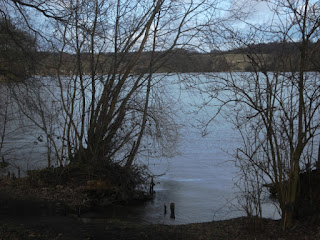 It's a cold, clear, morning as they set off, rowing a pair of boats down the river from Uldmere with a light breeze at their backs. Even the mist of lake Ild has almost burnt off by noon. They see a few fishers on the lake near the town, but the rest of the day come not upon a soul. It is evening when they reach the island, and they want nothing more to do than set up camp on the beach and get some well-earned rest.

Q: Is the cleric part of enemy force? Yes surge+2

Q: What's she doing? Cruelty / Failure -  sent away for her failings]

That night, as he and Lycinia are on watch, Manfred spots movement beyond the circle of firelight. "Who goes there?" he calls, rising and drawing his sword.

"It is I, Melitta, a priestess of the Light God. I saw your campfire. I mean you no harm."

The woman who steps into view is in her late 40s, with blonde hair fading to grey. Her white robes are marred with grass stains, but a large golden symbol of the Light God shines round her neck.

The rest of their companions (save Ruprecht, who is a heavy sleeper) have been roused by Manfred's shout, and they get up to see the new arrival.

"Well met. What brings you to this curse-shrouded isle? Are you here to bring the Lord of Day's Magnificent Radiance to dispel the shadows of ancient wickedness?"

"Aye, and more than that. I am on a sacred Quest to recover the Standard of St. Orvein, that it be used to inspire the army of Right in order to vanquish the heretic de Molleré."

"Oh sister," says Melitta, "I beg you to reconsider. The wrong people are in charge of our Holy Church. Under de Val d'Oine, the treasury is nearly bankrupt -- as will be our Sacred Doctrines under his incompetent leadership!"

[Q: How does Brichtrethe deal with this free-thinker? Mistrust / Information]

"Words. Mere words. I don't credit them at all."

"I thought the light was leading me to friends here in this terrible place. I see I was mistaken." At that, Melitta turns to leave.

"Stop right there!" shouts Brichtrethe as she raises her mace. "You'll not slink away so easily back to your apostate masters. Elf, help me search her!"

"Please," pleads Melitta, "I mean you no harm. There's no hospitality here, so I'd rather be on my own. The one that convinced me to come to this island can go hang. She's just using us. I'm certain of it. She has no loyalty but to herself, the witch!"

"It's this fiend called Jola."

"Oh, I've met her all right. She was trying to summon demons at the time. What is she after here?"

"There's some ancient magic she wants. She didn't really say, exactly. That is, I didn't really understand her magician-speak. She hasn't found it yet. And she turned me out into the cold saying I wasn't helping, and she was tired of my incompetence. But I suppose I should count myself lucky to have escaped."

[Q: Can Lycinia convince the rest that anyone Jola throws out is probably ok? 70, Yes surge +4]

"She's nothing incriminating on her," says Lycinia, "and isn't even armed. And anyone that Jola casts aside can't be a bad sort. I say we let her go if that's what she wants. I'm not in the mood to take prisoners."

"What if it's a trick?" asks Brichtrethe.

"Then she can think over what I just said about not taking any prisoners."

Brichtrethe registers her displeasure, but as the rest seem to agree with the elf, she bites her tongue, and allows Melitta to wander off into the night. 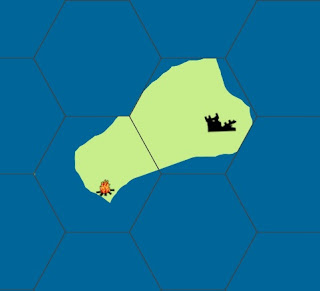 Q: What is he doing? Negligence / Dreams - fighter has ingested something funny.]

It's barely two miles to the ruins. The party strike camp in the morning after a somewhat leisurely breakfast, and set out on the way. Each has a weapon readied, for they fear to meet the witch or her cronies.

About the halfway point of their journey they see a man in full plate armour lying on his back in the tall grass. At first he seems dead, but as they draw near they can hear him babbling quietly, though if it be a real language or nonsense it is hard to say.

Brichtrethe walks up to him, and nudges him with her foot. "Are you well?" she asks.

"Well? Oooohhhh... isn't everyone. On a nice day like this with all the sparks and rain."

"Killjoy," says the man. "You're just like her. Maybe worse than her. She's the reason I got out. Before... before... before she opens the gate. I'm sure it wasn't made to be opened. But she can go through it for all I care. I'm all better now." [UNE: insane-turmoil-superiors]

Manfred leans over the man and looks at him carefully. "I don't think you're going to get any sense out of him, dear Brichtrethe. I've seen men in this sort of stupor before... in the sorts of establishments one doesn't admit to frequenting. He'll be like this for some time. And then sleep."

Manfred slams the man's ventail shut and continues towards the ruins. 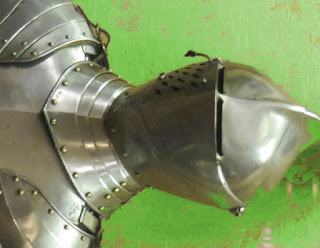