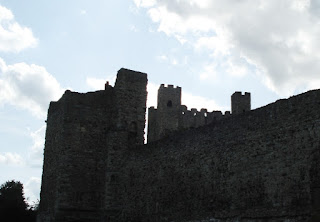 Long ago, a great king ruled from a mighty castle upon this island. Now only a handful of sections of the outer wall remain, and the shell of the central tower. Those of the approaching party who know the old tales struggle in vain to remember the name of the wicked king. Should he really have existed, the damnatio memoriae imposed by his victorious enemies seems to have been total.

The day seems clearer and brighter as they peer at the tower from behind a crumbling wall. The ruin is still, seemingly lifeless. Thiery produces a brass spyglass from under his cloak, but even with the aid of this device nothing is seen.

Assuming they're still walking into an ambush, they ready their weapons, and cross the high grass to the tower's entrance.

I rolled their classes on the chart in the Basic Rulebook (Moldvay, p. B52) with the proviso that results of demi-humans would instead be 0-level humans, and classed characters would be level 1d6. Treasure Type for each is U+V (0-level = U only). d30 Sandbox companion tables determined weapons & armour, and I added some missile weapons that seemed appropriate.

1d6=1; the PCs are all surprised by the first encounter.
Q: Are they attacked? Yes, but... Trap, not weapons] 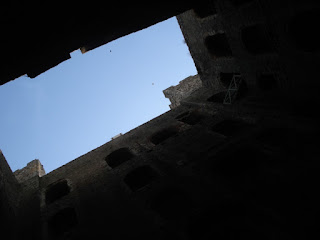 All is stillness in the great shell of the tower. The wooden floors have long since rotted away, leaving only the perimeter and outer walls. Windows and former doorways gape open at regular intervals, showing upper walkways and the sky outside. Some of the interior portions have crumbled along with the floors, so that what remains is a tremendous vertical labyrinth of passages, stairs, and numerous dead ends.

But the ruin is not abandoned. As the party pass through the gatehouse, a terrific noise is heard overhead, and then a cascade of heavy stones rains down on them from the murder holes above.

[2d6 damage, save vs. Breath Weapon for half, Dex modifiers apply to the save, and shields add +2. 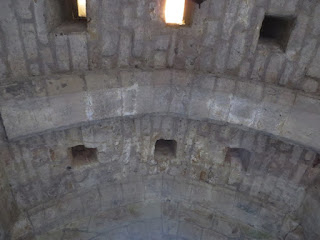 The stones fall thick and heavily. Lycinia's elven grace saves her from the worst of it, and mighty Brichtrethe holds her shield above her head and lets the rocks crash down upon it. The rest are not so fortunate. Manfred and Ruprecht both run out as stones crash down on their backs. Oswold is concussed and bleeding from a terrible blow to the head, and Thiery is knocked senseless, and lies half buried on the ground. Ruprecht quickly drags him to safety.

Manfred is quietly swearing about a fine start to their expedition, whilst Brichtrethe speaks an orison to the Light God, asking that He shew His Infinite Compassion to these stricken Soldiers of the Faith, and erase their hurts. Oswold and Thiery are bathed in a warm glow, and are once again whole [cure light wounds x2 brought them both to full HP].

The corridor in which the party has found shelter leads into the shell, so they follow it along to a narrow spiral staircase. They proceed up and through a series of passageways, cautiously moving past any gaps in the walls looking inward.

As the party are passing one of the larger gaps, a scruffy-looking man steps round the corner ahead, brandishing a pistol. The battle commences in earnest.

[Neither side is surprised, but the PCs lose the initiative. There was a lot of running round the castle after the missiles were discharged, so initiative was re-rolled after breaks in the fighting].

[Round 1]
The man with the pistol [ftr2] fires upon Lycinia who is in the lead. The ball pierces mail, padding, and the white shoulder beneath, but the wound is not grave [-4 range penalty (35') cancels +4 to penetrate chain armour, 17+4 hit for 4 damage, dropping her to 15hp]. The man's compatriots are across the great yawning interior of the shell, but they both have a clear shot. The report of an arquebus rings out moments later, and chips of stone fly from the interior wall; Thiery even felt the ball whistling by. At the sound, Ruprecht reflexively ducks behind his shield, and fortunately too, for in the next instant there is a crossbow bolt sticking out of it at face height.

Lycinia returns fire as her assailant ducks back behind the corner. The ball barely grazes him as he ducks out of sight [1 damage drops him to 11hp]. Thiery takes a shot at him as well, but the bullet ricochets off the stone wall. Brichtrethe shoots her crossbow at the arquebusière [ftr1] across the vast expanse, but the bolt merely hits a crumbling wall, then tumbles clattering down into the chasm.

[Round 2]
The scruffy man with the pistol reappears, having drawn his sword. He assumes a defensive posture [+4 AC]. His compatriots have disappeared behind cover to reload. 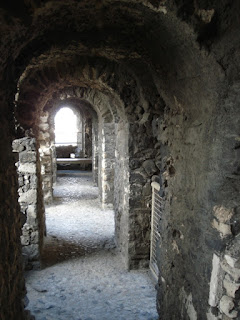 Lycinia runs forward, drawing her sword as she goes. The man endeavours to turn the blade aside with his own, but he did not count on the elf's strength and fury [effective AC 19; +2 attack bonus cancels -2 drawing penalty; she rolled a natural 19]. Her blade continues unimpeded towards his midsection, and he is transfixed [7x2=14 damage leaving him at -3hp, mortally wounded]. He sinks to his knees as she retracts the gleaming blade, then collapses face-first, his life gushing out upon the stone floor.

Everyone is behind cover now. Brichtrethe motions for Lycinia to continue forward with Thiery. She, Manfred, and Ruprecht double back to the nearest stairway leading up.

[The arquebusière (ftr1) needs 7 rounds to reload. Since there's no map, the two groups of PCs will take 1d12 rounds to find their foes: 5 & 7 respectively. The crossbowman (ftr0) will get 1d4=1 chance to fire across the middle before the PCs reach him.]

Both groups hurry through the ruins as fast as they might, swiftly deciding which passage to take, guessing how many flights of stairs they must climb. Only once does a crossbow bolt speed across the chasm, but bounds off the wall behind Ruprecht as he is dashing forward.

[Round 7]
Lycinia and Thiery round a corner and find the arquebusière still hurriedly loading her weapon. Seeing them she lets it fall and snatches up her sword, which she had leant against the wall [she even wins the initiative]. She and Lycinia clash swords, though neither can break through the other's defence. The woman makes a single mistake, and Lycinia's sword sweeps across her chest, but the stout mail does not yield.

[Round 8]
The woman gets in close, and the two lock hilts [ftr1 miss]. With a mighty shove, Lycinia pushes her back into a wall, and smashes the crossguard into her face. She falls reeling to her hands and knees, bleeding from the nose and mouth and spitting teeth. A knock on the crown of the head with the pommel of Lycinia's sword drops her [9 damage puts her at 0hp].

[Round 9]
On the other side of the shell, Brichtrethe rounds a corner to find the plate-armoured crossbowman. Both hesitate as they see their foe [both surprised, tied initiative], then Brichtrethe lets out a battle cry and charges down the passage. As she does so, he shoots. The bolt pierces her mail and buries itself in her upper arm [2 damage puts her at 19hp] but she seems to take no notice. She brings her mace down on his shoulder, deforming the armour plate and crushing bones [10 damage drops him to -5hp]. The life leaves his eyes and he clatters to the ground.

After a minute or so, the two halves of the party are reunited. Ruprecht is despatched down to the ground level to fetch Oswald, who had remained hiding on the first staircase, whilst the rest scout round the last few upper passages of the shell. 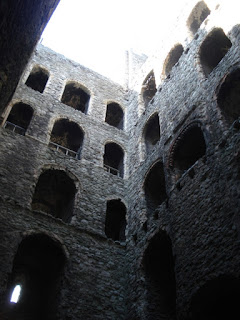 In a mostly-solid room on the top most level, Jola and her henchmen have made their headquarters. Lycinia does not intend to leave her prisoner unguarded, but Manfred insists she help search the camp. When Ruprecht appears at the top of the stair, Manfred is waiting for him. "Here," says he, handing Ruprecht the arquebus, "finish loading this and guard the prisoner."

"Can I keep it?" asks Ruprecht meekly.

"Can you--? By the frozen shores of Cocytos! stand up for yourself, man!"

[Q: Anything important in the camp? 83+2=yes and... it's J's spellbook
Q: Are there any clues? 02, No and unexpectedly...Foreshadowing – set a thread to be the main thread for the next scene. The current scene should then start wrapping up and heading towards the next scene.]

Thiery discovers a purse containing 28 gold coins -- and a pair of coppers hidden in a pillowcase. The gold is divided up, two apiece; the extra two coins go by lot to lucky Oswold and Thiery. The two coppers sit untouched for a while on a table, but Oswold scoops them into his purse when he thinks no one is looking.

But Lycinia has found, she exclaims, a treasure beyond price. Wrapped in a shred of black velvet is Jola's grimoire, an unassuming and cheaply-bound tome with its spine broken in two places, and unaccountable grey-green stains on some of the pages.

"Oswold, light a torch," orders Brichtrethe. "We shall burn that unholy thing."

"We shall do nothing of the sort!" protests Lycinia. "Not until we've examined it thoroughly. Can you risk destroying Jola's notes, which may be the key to unlocking the treasure vault wherein your precious Standard lies?"

"Fine. But remember my warning about black magic, elf. Let us go see if your prisoner has anything useful to tell us." And with that, Brichtrethe strides away.

[Q: Does the arquebusière have any info? Yes, surge =2
UNE: prejudiced-view-equipment
ftr1 passes her ML check; reaction=4, defiant and hostile.]

The prisoner is slowly coming round. Brichtrethe splashes her face with a waterskin to rouse her fully. The angry cleric asks pointed questions about the make-up of Jola's forces, their disposition and armaments, but is only met by stony silence. The questions only get more heated.

"Look at the lot of you!" she finally says, spitting blood in Brichtrethe's face, "You don't have the faintest idea what you're up against. You certainly don't have what you need to open the door. She's brought so much crap and hasn't managed a thing!"

"So this witch is after the treasury too!" exclaims Brichtrethe. "If you've nothing else to say, I suppose we're done here."

"You'll soon be in her thrall!"

Brichtrethe's only response is to crush the woman's skull with her mace. The cleric's companions -- Thiery and Oswold particularly -- look on with an admixture of surprise and horror, but she does not notice, intent as she is on the impassive elf.

"There shall be no mercy for the servants of darkness," growls Brichtrethe.

"It is not I who require convincing," states Lycinia flatly. 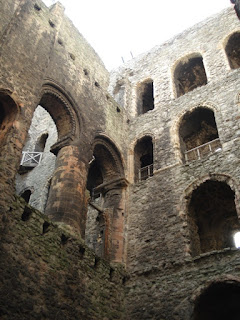