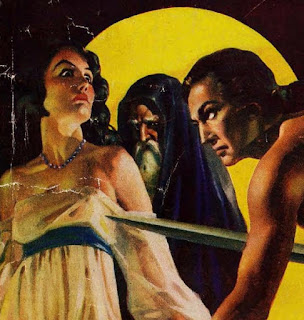 Lisk's eyes seem to shine golden in the torchlight. "There must be something down here to make it worth our while," he says.

"Let's just be careful," says Ksandajja. If truth be told, she's also more than a bit curious to see what treasures this forlorn place might hold, and the exercise of the battle has lifted the sluggishness from her limbs.

[The Weakness effect from the magical trap has dissipated.

Finding nothing of value in the room, they continue on. The only other door leads out into a long narrow corridor, which is illumined by a flickering green glow. The corridor stretches out for 10m before them, and in the midst of a three-way intersection ["Room" 4 : Fire Trap] there is a flaming green orb hovering by the ceiling. As they watch, it writhes and contorts, extruding and absorbing flaming tendrils in no discernible pattern.

"We'll have to dodge our way past it," says Lisk. "I can almost taste the treasure that lies beyond! Come now, on the count of three: one...two...three!"

But those were the last words he would ever utter. For as the three sprint past the orb, it lashes out with a fiery tendril which wraps round Lisk's head. In an instant his whole body is wreathed in green flame. His companions look back, and see his corpse burning with unnatural intensity. 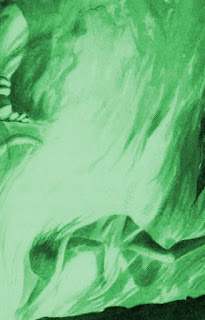 "What an awful fate," replies Ksandajja.

[The PCs had to Test their LUCK to get past. Lisk had a current Luck of 10, so there was an excellent chance (~92%) of him getting through, but in his hubris he rolled an 11... 1d6 damage killed him outright. Ksandajja and Valganadd both succeeded, but each Test reduces the current score by 1; their Luck scores now both stand at 6.]

At the end of the corridor is another heavy wooden door, warped and swollen from the damp. As Ksandajja tries to open it, it doesn't respond at all to careful pressure, but a swift kick sunders its rusty hinges and it falls forward into the watch commander's former quarters [Room 5].

The bed is a sagging lump of foulness boxed in by decaying timbers, and the wall-hangings are black with mildew. Most of the floor is covered in an inch of befouled water. An iron strongbox sits against one wall, completely red with rust but still intact.

Ksandajja takes a cautious step into the room, and stops suddenly short, as a gruesome form steps into the light: a gleaming white skeletal figure, wrapped in a translucent shroud, and wielding a glittering steel sword. 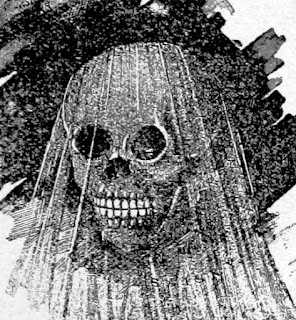 [Round 1]
Valganadd begins to cast a spell, slowly and surely again, in hopes of getting it out before his hiccups spoil it. Ksandajja meets the phantom's steel with her own. There is a loud clash as their blades meet, but then her swift riposte connects with the fiend's bony neck -- and passes right through! The DEATH WRAITH has no physical form, but its blade is very real [she rolled 8(skill) + 11 vs. its 9 + 6, a hit; but it is immune to mundane weapons].

[Round 2]
"If you're going to do something," says Ksandajja parrying the wraith's blade, "you'd better do it quickly!" [she's fighting defensively, which adds +2 skill but inflicts no damage if she wins the round (which she did 8+9+2 vs. 9+7)]

[Rounds 3-4]
Valganadd chokes on the final syllable of his spell, and his empty gesture towards the enemy produces nothing.

Ksandajja backs up steadily toward the door, all the while keeping the wraith's sword at bay [wins another round of defensive combat]. Then she whirls about and dashes through the open doorway. The wraith's final swing draws a long red line across her flank, but the wound isn't terribly deep [she's hit for 2 damage, leaving her with 5 Stamina].

Even more fortunately, the wraith does not give chase. Wizard and sorceress pause in the long corridor, and regard for a moment the smouldering remains of their former companion, and the evilly pulsing orb of green fire above.

[Now that they've seen the trap, the PCs have the option to Test either Skill or Luck. Valganadd has only a 4 Skill, so opts for Luck (currently 6). 2d6=5, success. 5 Luck left.]

"Quickly now," says Valganadd, and sprints past it. The tendrils lash out again, though none come near the old man.

[Ksandajja has 6 in each currently, so goes for Skill, but fails her roll.]

Ksandajja runs and ducks under the tendril sweeping through the corridor. It touches her lightly on the shoulder, charring and blistering the skin, but she is at least not set alight [1d6=1 damage; she's down to 4 Stamina].

They both agree that it's too dangerous to explore further. They retrace their steps, and get back up to the shell of the tower without incident. They huddle under last remaining bit of the upper wooden floor to avoid the wind and wet.

They are able to break up one of the old wooden weapon racks from the quartermaster's room and get a small fire going. Valganadd offers to take first watch, and Ksandajja is too tired to protest. She is soon asleep on the cold ground.

But the old wizard is a poor guard, staring into the meagre fire and mumbling to himself under his breath. Thus it is that he does not hear heavy footsteps plodding up the staircase, nor does he notice the intruder until a steel blade crashes down on his back, gashing it open and spraying blood everywhere [+2 on the damage roll for the ambush; 4 damage drops V to 6 Stamina]. His cry rouses the sorceress, and in the weak firelight they behold the charred corpse of Lisk, who has returned as a REVENANT to seek revenge on his former comrades. 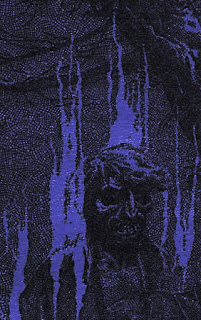 [Round 1]
Valganadd looses a barrage of arcane energy at his former companion [successfully casting Force Bolt (at -2 to cast for being attacked in mêlée); 1d6=1 damage], but the already blackened corpse shrugs it off. Its eyes burning with hate, it stabs again at Valganadd, nearly puncturing a lung [3 damage puts him at 3 Stamina]. Ksandajja slashes down at the undead horror opening a rent from sternum to groin. Steaming innards slough out onto the ground, smelling of shit and over-cooked meat. But still the revenant fights on [3 damage left it with 2 Stamina].

[Round 2]
Valganadd recoils at the smell, and the bile rising in his throat chokes off the words to his spell; the magic does not come forth [technically, the -2 for being in mêlée made him fail the roll]. The shambling corpse wades through its own innards to bring its sword down on Valganadd's bald pate. The wizard collapses [3 damage puts him at exactly 0 Stamina]. Ksandajja curses herself for hesitating. Moments later her sword flashes in a high arc, and the revenant's head flies off to land in a puddle. The body wavers a moment, lurches a final step towards her, then crumples to the damp earth.

She rushes to Valganadd's side, and tears a strip of cloth from his robes to staunch his bleeding head. But when the blood stops flowing, she can find no more heartbeat [First Aid special skill: skill 6, +2 for Learned, but 2d6=9, failure]. She lets out a scream which echoes up through the ruined tower. "Taunt me all you like, Foul Gods of Chaos! I fear not your dark designs!"

Though Ksandajja may feel unafraid of spiritual machinations, she cannot but think that monsters of a more physical sort may still be lurking beneath he tower, waiting for a chance to strike. So she creeps away from tower out into the driving rain. She murmurs the words of a minor spell, and the dweomer keeps the rain from quite touching her skin, and warms her inwardly against the night's damp and chill [she casts the Weather Protection cantrip]. She finds a hollow under a jagged boulder for a shelter, and somehow manages to get some sleep. [For the miserable conditions (even with her magic) she only recovers 2 Stamina for a night's sleep. But she also loses 2 Stamina for lack of food, so there is no net change.] 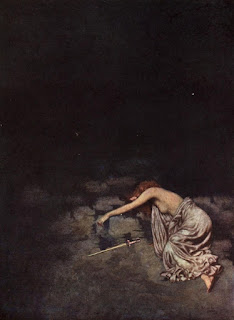 Setup: d8=3, Interrupt (was: to the city)
Interrupt: (random picture: vulture with sword) an Omen

The rain has finally stopped by morning, and the sun shines brightly through a break in the clouds. Ksandajja crawls out from beneath the stone, stretches to work out the soreness of the night, and feels the warm sun on her face, along with a good deal of caked dirt from sleeping in the mud. She finds water pooled atop a rock to slake her thirst, and a reasonably non-muddy puddle in which to have a cursory wash, then she sets off to the south again, keeping the sea in sight as a guide.

About mid-day, she sees something in the sky. It draws nearer, and her vision resolves a strange sight: a vulture is soaring on the breeze, a costly sword in a bejewelled scabbard gripped in its talons. The vulture flies over the astonished sorceress, circles once, then glides off out over the sea. 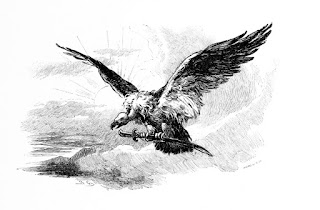 "That must be an omen," thinks Ksandajja, "but whatever can the sight of that dira avis portend?"

She watches the vulture disappear in the distance, then resumes her march. The hills become steeper, the valleys between them more overgrown, but the city is soon visible in the distance. She squints her eyes, and fancies she can see the great side gate and the mercantile road leading inland from it. Her pace quickens.

But as she descends from another bare hillock down into the patch of vivid green vegetation [1d6=1, random wilderness encounter], she is suddenly met by another creature. It has the body of a great cat, with sleek fur, a nervously twitching tail, and sharp claws, but above the forequarters is the torso of a man, with deep brown skin and the mien of a hunter, and armed with a painted wooden shield and a bronze tipped lance. The FELINAUR eyes the intruder with suspicion, studying her with piercing eyes. 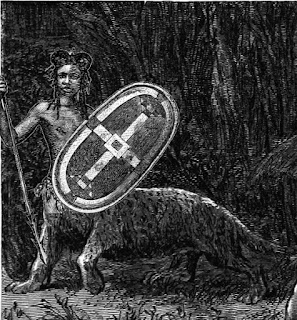 [A Felinaur's Reaction is listed as Neutral in Out of the Pit. Ksandajja may Test her SKILL to parley: 2d6=7, failure.]

"Please, good sir," says the sorceress, "I mean you no harm. I was shipwrecked, and now must walk to the city. I haven't had any food since yesterday. Would you perchance have any to trade?"

The felinaur does not lower his lance. His tail thrashes more angrily, and he unconsciously paws at the ground. "Be on your way, HUMAN. We have learnt not to trust your kind." [UNE: prejudiced-difference-parents]

Ksandajja walks on towards the city. 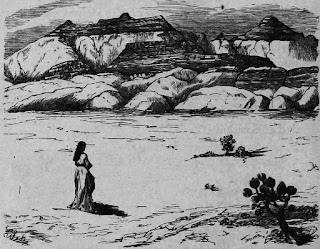