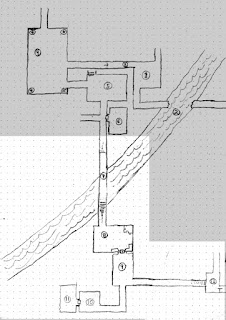 Lycinia sets off down the passage to the south [Area 7. - Stairs Up 1 then down 2 (total down 1), chamber at end (roll on TABLE V.)] A set of stairs lead up, and the passageway continues over the sewer channel. Rusting iron grates are set into the floor, and Lycinia can hear (and smell) the water running below. On the other side of the channel the stairs begin to descend, and drop to a deeper level than before. [I am still mapping the dungeon on the same page. This area won't join with rest (the area across the broken bridge) unless I roll stairs up.]

The passage ends in a 20x30' chamber [Room 8. - Monster & Skill Challenge & Treasure]. Ruined machinery occupies much of the room, and a more functional-looking mechanism is located by a solid iron door in the south wall. Lycinia is about to examine it when she catches sight of a black fish swimming lazily through the air [Spot Hidden succeeds, so she isn't surprised. It wins Initiative]

[Dazzle makes sense for its first attack; should this fail there is a 50/50 chance of Dazzle or Burn each round thereafter, until its opponent is blinded.]

[Round 1]
The fish turns towards Lycinia, and emits a blinding flash from its tri-lobed eye. [Dazzle (90%) succeeds, she must roll POWx3 (36%) to resist: 07!] She closes her eyes for an instant, and avoids the worst of it, though the blotches in her vision are distracting enough that her sword merely swishes through the air above the creature.

[Round 2]
The demon-fish's eye flashes again, and releases a ray of scorching heat which strikes Lycinia in the midsection. She can feel her mail grow hot to the touch, and feels it scald her skin beneath where the ray touched her. [hit for 1D6+2=8 heat damage to abdomen; armour absorbs 7 (but the first round only); Luck roll to avoid catching on fire succeeds] Her tabard looks scorched, but does not ignite. She swings again at the creature, but it just evades her stroke [attack succeeds, but its Dodge (48%) is also a success, negating the hit].

[Round 3]
She tries to hit it on the backstroke, but the eyes flash again at that very second. She is dazzled by the brilliance, and the whole world becomes a glow of blotchy colour. [Initiative tied this round. She missed, and then failed her POWx3 roll. She will be blinded until round 12. She will need to make an Idea roll (INTx5=80%) each round in order to guess where her enemy is each round so she can attack, but even then the attack is Difficult. She cannot Dodge the ray.]

[Round 4]
She feels the heat ray burn into her sword arm [1d6+2=3 damage to right arm; she has 3hp left in the arm, 20hp total]. She can smell the padding beneath her mail smouldering [but Luck roll succeeds, so it doesn't catch fire]. She rushes forth to attack what she feels was the source of the blast, but her sword swings through empty space [she would have hit, but it dodged].

[Round 5]
Lycinia feels another blast of heat on one side of her face, like standing too close to a campfire. She lashes out in that direction, and feels her sword cleave right through something yielding. She hears two wet thuds against the stone floor, followed by a the creature's flopping death throes. [it missed & failed its Dodge. She hit for 1D8+1=7 to the hindquarters, reducing it to -1hp.]

Lycinia remains very still, listening to the thing slowing cease its thrashing, but, more importantly, for the sound of anything else that might be creeping up upon her. It takes a little more than a minute [7 rounds / 70 seconds] for her vision to clear, and then she is able to properly examine the room. 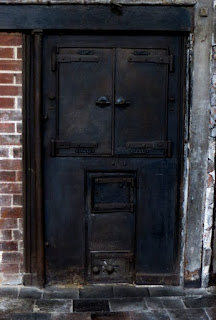 The large mass of machinery in the room is covered in dust and corrosion. She surmises it was some sort of mechanical pump, but its days of usefulness are long since past. In contrast, the smaller mechanism by the iron door is fully functional. It consists of a series of brass levers and pistons with no obvious markings. But on the wall above it someone has scratched instructions in the Ancient Tongue, so it is a simple matter for the learned elf to put the levers in the correct positions. When the last lever is in place, Lycinia hears the sounds of bolts being thrown within the iron door and wall, and the door swings slowly open.

Beyond is a smallish chamber [Room 9 - Monster only], with another nightmare guardian. The creature stand nearly as tall as Lycinia on eight spindly, sinewy legs, which radiate from a lumpy globe of flesh in the middle. The mass has no definite features, save for the twisting black horn jutting forth from it. The creature's skin is so thin as to be transparent, and veins pulse rhythmically beneath. It exudes a sharp odour of spoilt meat.

[Round 1]
It was alerted to her entrance by the sound of the mechanism, and scurries toward Lycinia almost before she has crossed the threshold. She easily avoids the thrusting horn [miss] but the staccato rhythm of its steps has an unnerving effect, and she finds herself unable to decide where to strike [the Confusion power reduces her chance to hit by 30%; 62-30=32%; d%=42, miss].

[Round 2]
It makes another clumsy thrust, which she sidesteps with ease [miss]. It in turn bounds suddenly out of reach [attack roll of 10 would have hit, but it has Dodge of 50%: d%=25, dodged].

[Round 3]
It leaps at her suddenly, putting all its weight behind the horn flying towards the elf's neck. Lycinia is just barely able to deflect it with her blade, but only a few inches. The horn scrapes against her armour, but the links of mail hold, and save her from any real harm. [It rolled 05, a Special success, but she rolled her parry, reducing the Special (Impaling!) down to a normal hit. 1d8+2+1d4=7 damage, nothing gets through (Chain has 7 AP)] The impact throws her off balance, and she takes a moment to steady herself [rolled  a miss].

[Rounds 4-5]
The beast jabs at her again, thinking her off balance, but it is she who catches it unawares. She smashes the horn out of her way with the crossguard and plunges the point of her blade into the centre mass in one fluid movement. [It rolled another Special success (08), but so did she (09), so she parried the attack. She then hit for d8+1=7 to the Abdomen, leaving it with 3hp]. The creature wobbles and drops to the floor, but still tries to assail the elf. Lycinia makes short work of the foul thing. [Fighting from the ground makes all attack and defence rolls Difficult, and makes it Easy to be attacked. Lycinia had a (62x2 -30=)94% chance to hit, and rolled a critical.] 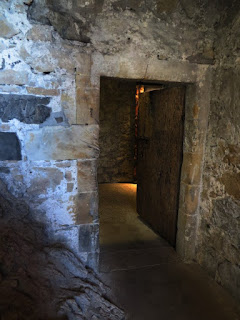 Other than the creature, and a few scattered bones, there is nothing else in the room. Two passages lead out; Lycinia takes the one to the south. It turns a corner and leads her in to a 15' square chamber [Room 10 - Skill Challenge only], bare save for an iron-shod wooden door in the centre of the far wall.

Lycinia tries the door, and finds it locked. Her attention is momentarily captured by a bas-relief carved into the wood. "Of all things, why would someone carve a rooster into this door?" thinks the elf. "Humans are strange." [Her Folklore (08%) roll failed. She didn't correctly identify the cockatrice (rolled on the d30 Sandbox Companion's Expanded Heraldry Charges/Sigils table)]

The door's lock is clunky, and big enough that Lycinia can pick at the mechanism with the point of her dagger, but she cannot seem to throw the tumblers into place. After a few clumsy attempts, she opts for a more direct approach, and puts her shoulder into it.

She throws herself against the door, and it bursts open at once, splinters of wood flying. She rights herself hastily and grips her sword prepared to do battle with anyone -- or thing -- who may be in the room beyond, but as the dust settles she finds it unoccupied. 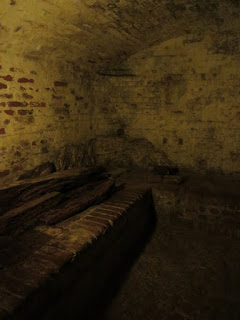 The rectangular room [Room 11. - Skill Challenge & Treasure] has a low, vaulted ceiling. The centre of the floor is recessed about a foot down, and the ledge round it is covered in debris. But behind a rotting piece of timber something glitters, and Lycinia braves the acrid scent in the air to investigate.

She finds a threadbare cloth sack that has split open, spilling out its bounty of copper and silver coins. Amongst the coins are some tarnished rings and a few polished stones. [Evaluate (22%) roll fails, so she doesn't notice the valuable gems; Stamina (70%) also fails]. As she pokes through the pile, her vision begins to blur and her throat starts to burn [1d4=4 damage drops her to 16hp]. She grabs the rings and hurries out of the room, not daring to breathe again until shutting the door firmly behind her. 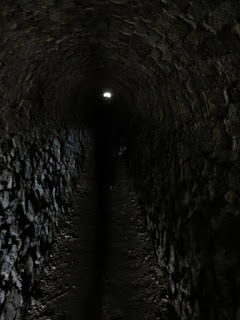 Lycinia backtracks to the room where she defeated the eight-legged demon [Room 9], and heads down the long narrow passage to the east. It goes for what seems an eternity (~50') before ending in a set of uneven flagstone steps leading up [back up to the level of the first part of the dungeon]. At the top of the steps is a mildewy landing [Room 12 - Skill Challenge only] from which passages lead to the north and east.

[Challenge: Read/Write Ancient Language (normal) interlinked with Dodge (normal)
'Interlinked' means that a single roll is made against both skills, with the lower of the two capping the higher. Lycinia's R/W Ancient is 47%, her current dodge is 66-25(armour & encumbrance)=41%]

Lycinia's torch reveals a gleam on the lintel above the [1d2=] eastern passage. Golden letters have been inlaid into the stone, spelling out the legend PÆNITENS PRÆTERIBIT. "How odd," thinks the elf, as she proceeds slowly past the threshold. "That reminds me of something... yes, in Wandlebourne, that silly play that Emmeline took me to see. Oh, poor, poor Emmeline! But that scene was important. How did that go? 'The penitent man will pass'. That's it! The penitent man [d%=24, success] kneels!"

And so too does our heroine -- and not a moment too soon, for a razor sharp blade whizzes out from the wall at chest height, swishing through the air right above her bowed head.


next post: the dungeon continues
Posted by Alea iactanda est at 11:42